Skip to content
You are at: Home » Buy Bitcoin (BTC) » France

This guide for all the information on Bitcoin’s status in France, plus the best Bitcoin exchanges in Europe.

How to buy Bitcoin in France Summary

To buy Bitcoin in France you can either visit a Bitcoin ATM, or follow these steps:

If Coinmama isn’t a good fit you can visit any of the exchanges below for buying Bitcoin in France:

That’s how to buy Bitcoin in France in a nutshell. For a more detailed explanation keep on reading, here’s what I’ll cover:

1. Is Bitcoin legal in France?

Yes, Bitcoin is legal in France but it is not considered a currency. The French government classes Bitcoin and other cryptocurrencies as digital assets.

France is leading the way in European cryptocurrency regulation. In 2019, they adopted the Pacte bill. A financial sector bill establishing the legal framework for cryptocurrency providers and ICOs. This gives the Autorié des Marchés Financiers (AMF), the French financial authority, stronger regulatory power including company licensing.

While citizens are free to use Bitcoin, the bill meticulously specifies the type of investment funds that can access the cryptocurrency market. It is reported that France intends to push the European Union to adopt the same regulatory framework.

2. How popular is Bitcoin in France?

The chart below shows the weekly trading volume for Europe on LocalBitcoins. Since the 2018 pullback, volumes generally sits at around €2 million. Volumes moved with global trends as it doubled to €4million during June 2019 when Bitcoin’s value grew to over €10,000.

Interest in Bitcoin in France is displayed by Google Trends, using the search term Bitcoin. It generally tracks the 50 line, moving above or below in coordination with European volumes and price movements. A particular highlight is the interest spike in June 2019 as Bitcoin regained some popularity globally. 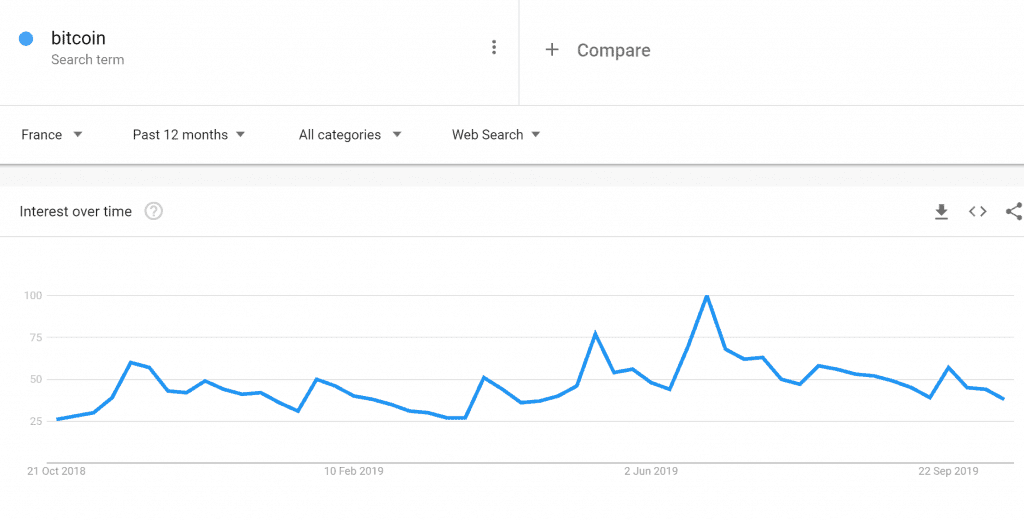 France is a technologically forward-thinking country with the young population keen to innovate and adopt new ideas. For Bitcoin, there are plenty of online communities and forums discussing everything from the best exchanges to trading strategies. Here are some examples for you to check out:

French customers enjoy a strong selection of Bitcoin exchanges. Many of them are based in Paris, adhering closely to French and European regulations. Here are some of the best French Bitcoin exchanges for you to choose from:

Coinhouse aims to make cryptocurrency investments easy for first-time buyers. Operating since 2014, the exchange is based in Paris and affiliated to Ledger – the popular hardware wallet provider. Coinhouse offers customers both an online platform and a bricks and mortar location.

It has provided over 200,000 EU customers with easy access to BTC, ETH, LTC, XRP and BCH. The platform is a broker service, thus removing the technical complexities of buying Bitcoin. More than that, it even offers a personal investment service to its customers. You can read my full Coinhouse review here.

Paymium claims to be Europe’s first Bitcoin exchange, having launched in 2011. The Paris based company provides Bitcoin buy and sell services across France and Europe. It is closely regulated for French and EU payment methods, enabling Bitcoin to Euro trading pairs, plus merchant payment functions.

Users can trade via advanced order book and a mobile app. The platform has 0.20% trading fee which is fair, although not the cheapest in the industry.

Bitit is another Paris based Bitcoin exchange in operation since 2015. The platform offers non-custodial cryptocurrency trading. It is developed, hosted and regulated in France, making it compliant to new local and European regulations. Euro to Bitcoin buys can be made via SEPA, Mastercard and Visa.

Fees are as low as 0.25% for SEPA transactions, making it an attractive option. Once the transaction is confirmed, coins are delivered directly to your Bitcoin wallet.

Bitpanda is a regulated cryptocurrency exchange in France, the company is registered with the Autorité des marchés financiers (AMF), the Financial Markets Authority of France. Bitpanda offers one of the cheapest options to buy Bitcoin and 100+ different altcoins in Europe using SEPA transfers. Payments can be made with credit or debit cards as well.

All fees are incorporated into the price of coins, no additional charges are applicable. You can read my full Bitpanda review here.

International exchanges offer added options to French customers, with many supporting Euros and helpful deposit methods. Here is a top selection available to you:

Coinmama may be based in Israel, but it’s available in a huge number of countries, including France. It was launched in 2013, and it offers convenience: you can buy Bitcoin with a debit or credit card.

The downside is that the fees are on the high side at 5.5% per transaction and 5% per credit or debit card transaction. You can read my full review of Coinmama here.

CEX.IO is available in most countries around the world. Founded in 2013 with its headquarters in London, this cryptocurrency exchange allows users to buy and sell Bitcoin, as well as a selection of altcoins.

Both credit cards and SEPA bank transfers are accepted payment methods, with low fees of 0%–0.2% on trades. CEX.IO offers both a trading platform and a brokerage service, both entail different fees. You can read my full CEX.io review here.

bitFlyer is a regulated Japanese cryptocurrency exchange that has an European branch offering services in France as well.

You can buy BTC, ETH, BCH, ETC, LTC, MONA and LSK with EUR deposits, credit and debit cards, SEPA and PayPal payments. Regular cryptocurrency buys and sells are free, but subject to bitFlyer’s exchange rate. You can read my full review of bitFlyer here.

Paxful is a P2P marketplace, which allows buyers and sellers to meet online and trade Bitcoin directly with each other. Founded in 2015,  by now they have offices in multiple cities around the world.

Sellers on Paxful accept over 300 payment methods, including SEPA bank transfers, Visa, MasterCard and PayPal. If you’re buying Bitcoins on Paxful, you won’t have to pay any fee to the site itself, but the price of Bitcoin is traded at a premium because of this. You can read my full Paxful Review here.

Changelly is a crypto-only exchange, founded in 2015. Signing up for an account doesn’t require any personal information, and you’ll then have a quick and easy way of exchanging cryptocurrency from one wallet to another.

There’s a fixed fee of 0.5%, which is slightly higher than many other Bitcoin exchanges. You can read my full Changelly review here.

6. How many Bitcoin ATMs are there in France?

As of 2019ֿ, there are 3 Bitcoin ATMs in France, according to CoinATMRadar. These are spread around the country, with none in Paris so far.

France’s progressive stance on cryptocurrency makes it really easy for citizens to buy and trade Bitcoin safely. New regulation ensures companies and ICOs are operating legitimately. A selection of Europe’s big cryptocurrency platforms are even developed and run from Paris.

As they push their regulatory framework to be adopted by the European Union, France appears to have a bright future in the cryptocurrency industry.

Know of any change in Bitcoin’s legal status in France? Do you have an experience with the exchanges I’ve mentioned above? If yes, let me know in the comment section below.