Skip to content
You are at: Home » Bitcoin » ATM

Bitcoin ATMs let users buy and sell Bitcoin with cash, with relative anonymity. In this post, I’ll cover the different Bitcoin ATMs around, their pros and cons and also show you how to find a Bitcoin ATM near your home.

Bitcoin ATMs, also known as BTMs, are machines that accept cash and dispense Bitcoin in return. Some ATMs also buy Bitcoin from you and dispense cash in return.

Due to their anonymous nature, most Bitcoin ATMs have strict buying limits, with some even requiring a KYC process. Here are the top Bitcoin ATMs around:

That’s Bitcoin ATMs in a nutshell. If you want a more detailed review about BTMs keep on reading, here’s what I’ll cover:

A Bitcoin ATM acts like a physical Bitcoin exchange where you can buy and sell Bitcoin with cash. The world’s first Bitcoin ATM was opened on October 29, 2013, at Waves Coffee Shop in Vancouver, Canada. Bitcoin ATMs often consist of a scanner, a cash dispenser, and a computer to manage the transactions.

Bitcoin is dispensed either to the buyer’s own Bitcoin wallet (via scanned QR code on the buyer’s mobile device or paper wallet) or to a paper wallet generated and printed by the ATM at the time of purchase.

The price of the purchase is dependent on the current Bitcoin exchange rate, which the ATM retrieves from the internet in real-time. An additional percentage fee is charged by the ATM for the service, which is also factored into the price.

Do Bitcoin ATMs Give Cash?

How much fee do Bitcoin ATMs charge?

Bitcoin ATMs charge an average fee of 15%. However, this is a rough average and the fees vary between ATMs, with some charging as much as 20% or more. Make sure to read the instructions and fees on the machine before starting the process.

While each BTM is different, the buying process in all of them is basically the same:

The process of selling Bitcoin to a Bitcoin ATM is much more diverse and depends on the specific BTM, however, these machines are pretty intuitive to use so just follow the instructions on the screen.

General Bytes, a Czech based company, is the world’s largest Bitcoin, blockchain and cryptocurrency ATM manufacturer. The company has sold over 13,300 machines in over 143 countries.

The BATMTwo is their most popular model and is designed to be securely mounted on a wall or optional stand. It supports only buying cryptocurrencies and has a built-in finger scanner for AML/KYC compliance. The BATMTwo costs around $3,649.

There are also two updated versions of the BATMTwo, the BATMTwoPro ($4,799) and BATMTwoUltra ($4,999). The BATMTwo has a larger screen and updated banknote validators to flawlessly identify fake and damaged notes. The BATMTwoUltra is a more compact version of the BATMTwo but also offers bi-directional transactions, meaning that it can convert cash to crypto as well as converting crypto to cash. 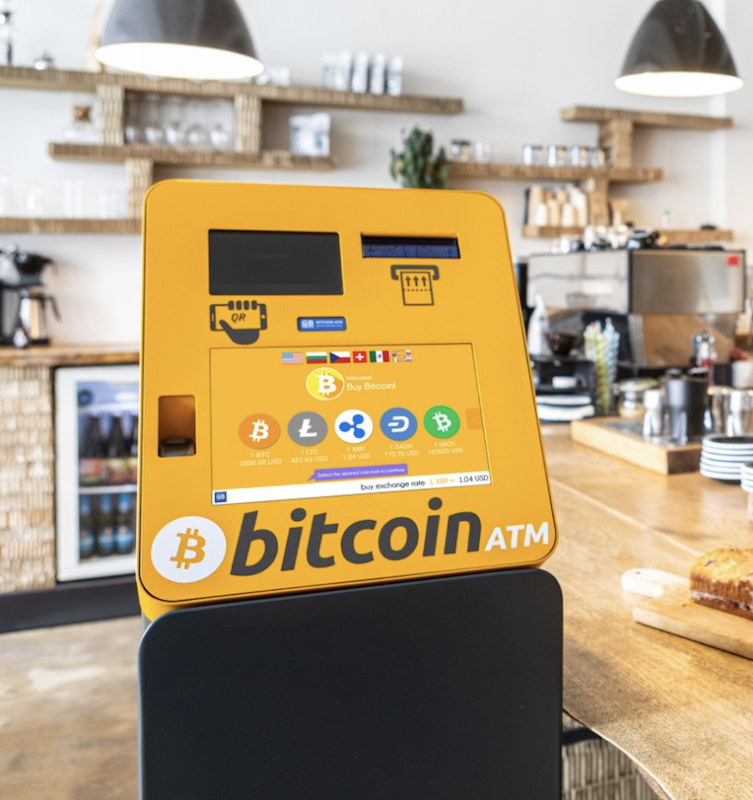 The BATMThree has an updated design, a 23″ FullHD display and is a fully-mounted BTM. This Bitcoin ATM offers both buying and selling of Bitcoin and other cryptocurrencies. Unlike the BATMTwo, this model can also issue users an NFC card that contains a private key which they can use later to send or receive Bitcoin by placing the card on the NFC reader. The BATMTHREE costs around $6,698. 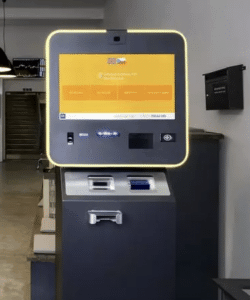 The BATMFour is the latest model from General Bytes, matching all of the BATMThree’s features in a new design. It allows both the buying and selling of cryptocurrency, plus the option of individual configuration and retails for $7,198. 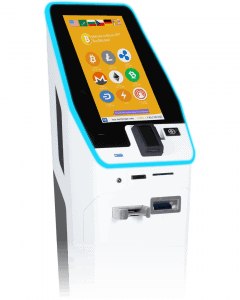 Genesis Coin Inc., based in San Diego US, is the second most popular Bitcoin ATM manufacturer. The company supplies three different BTM models: 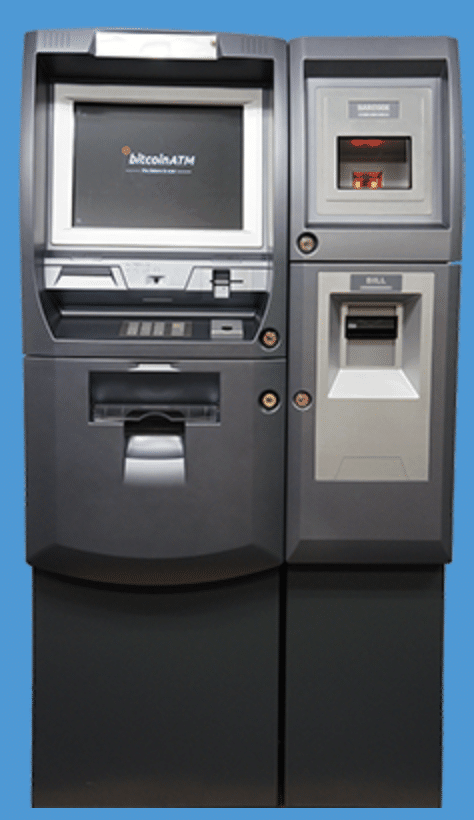 The Satoshi1 comes in both a 1-way or 2-way model. This machine is much smaller than the Genesis1 and has a 21’’ screen, a high definition camera and an optional fingerprint scanner. The Satoshi1 costs $7,380, with additional costs of around $2,100 if a cash dispenser is required.

The Finney3 is the newest and smallest BTM from Genesis Coin. This 1-way BTM has a 21’’ screen and similar features as the Satoshi1, only it’s smaller and should be mounted due to its size. The Finney3 costs $4,500. 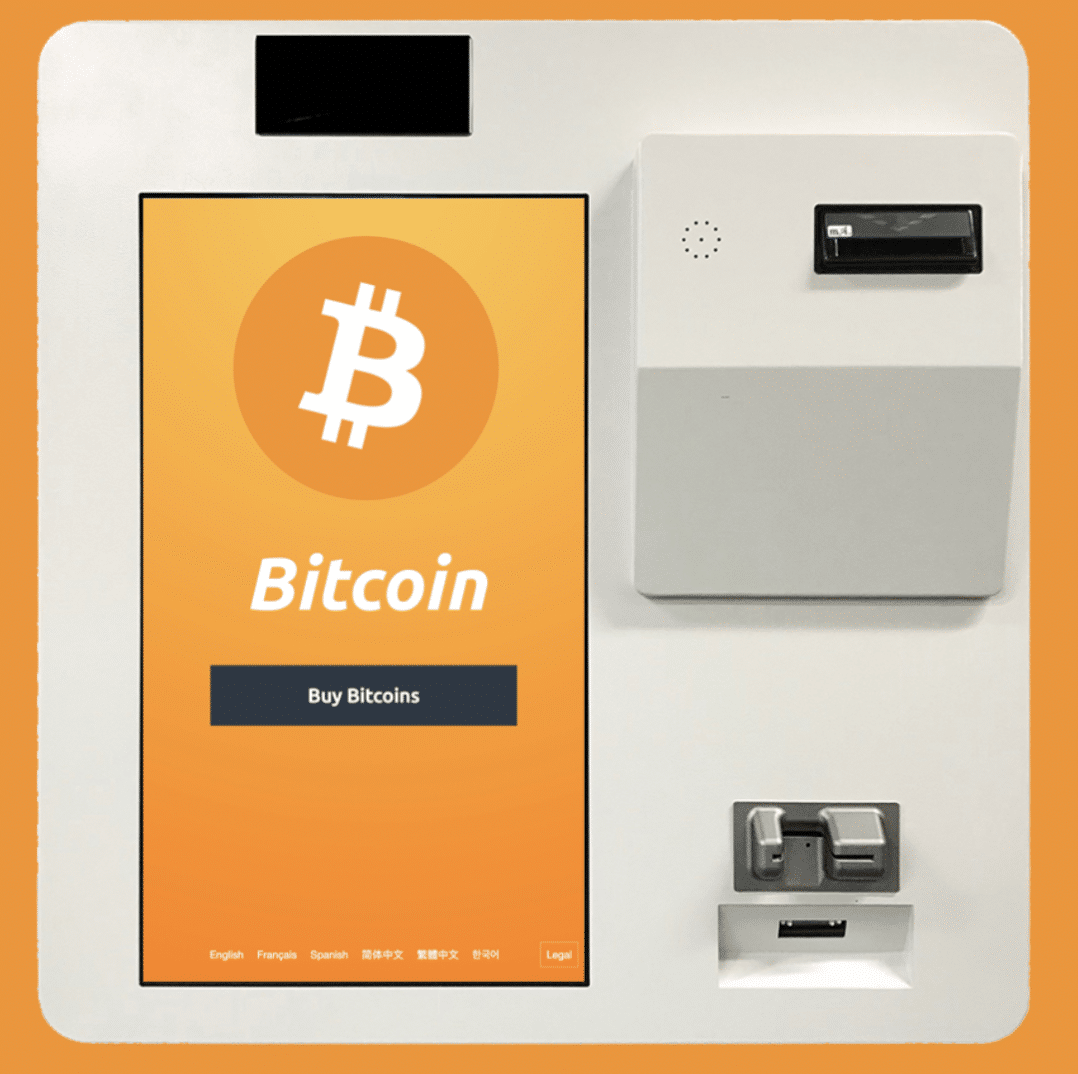 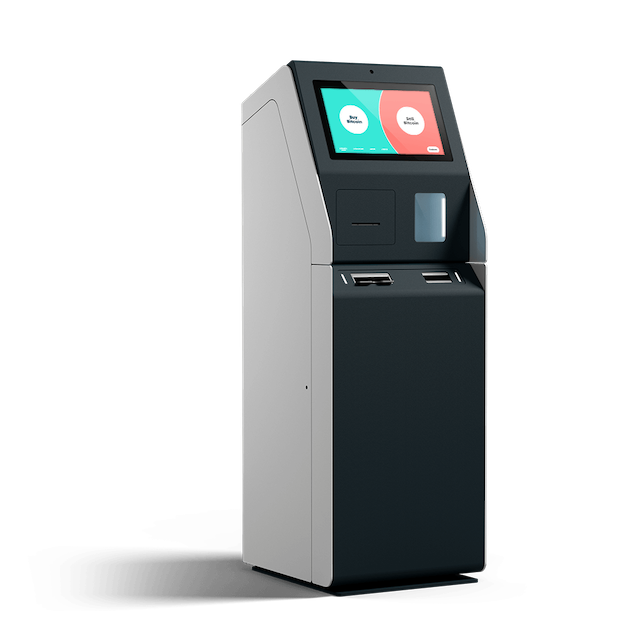 Designed to be wall-mounted or table-mounted and weighing only 25 kgs, Gaia can fit into a flight case. Gaia is a buy only Bitcoin ATM and it costs €3,800. 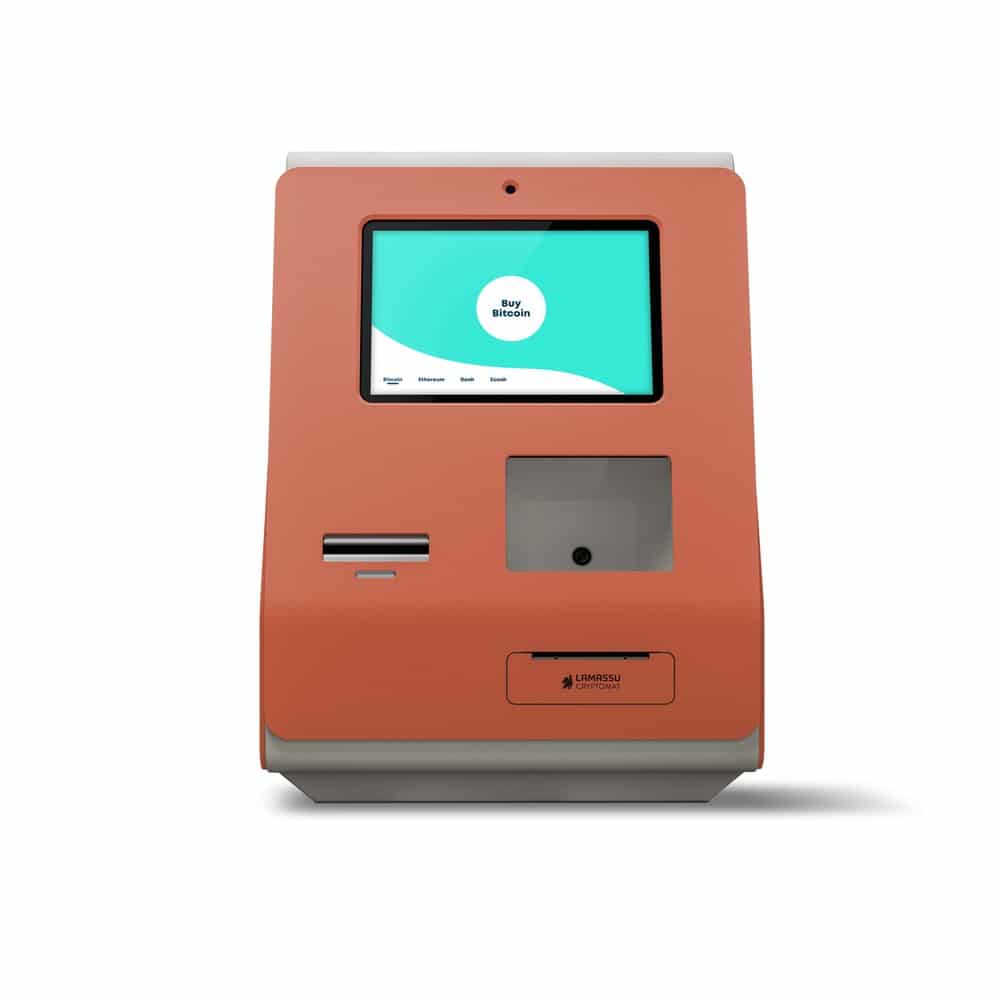 Fabricated from sheets of 2.5mm steel and an all-glass user interface, the Sintra has a custom computer board with battery backup, 3G connectivity, tamper sensors, and front door control. This is a 1 or 2-way Bitcoin ATM that is beautifully designed. The 1-way model costs €5,800 while the 2-way model costs €7,300. 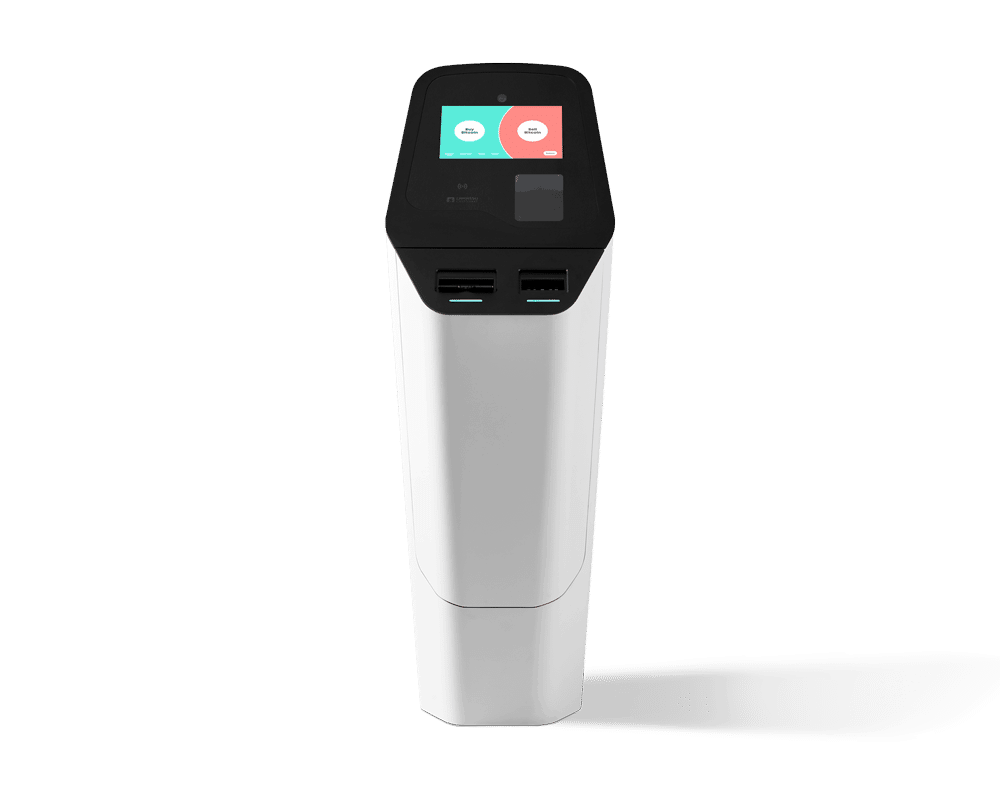 The Sintra Forte is about 20% larger than the Sintra and includes a vault controlled by an electronic lock. The vault is constructed from 6mm hardened steel and contains the note validator, note dispenser, and computer board. This BTM also comes as a 1-way (€6,560) or 2-way (€8,000). 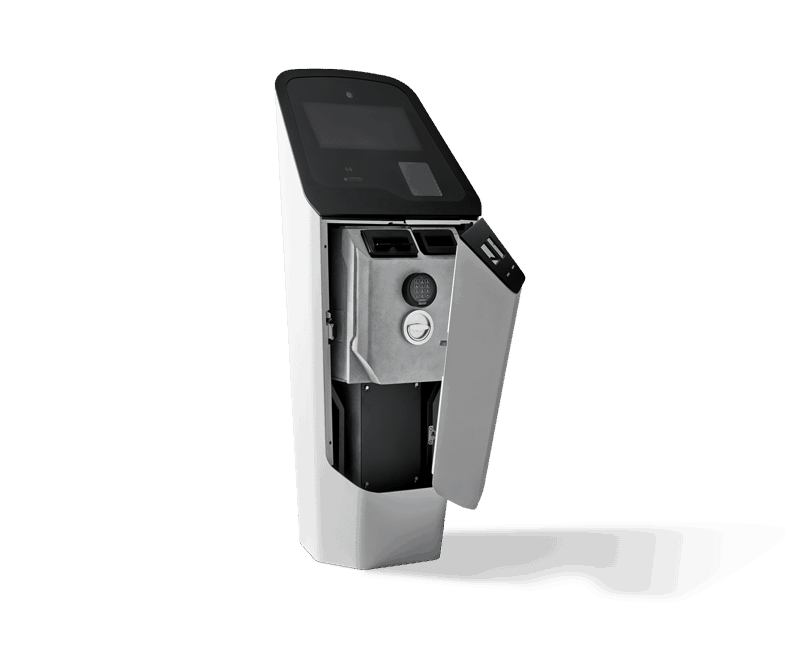 There are almost 30 Bitcoin ATM manufacturers. Here’s a list of all of them:

5. Where Can I Find a Bitcoin ATM?

Here’s a complete list of Bitcoin ATMs around the world, courtesy of CoinATMRadar. Just find your location and see where the nearest Bitcoin ATM is to you.

If you are in the US, try out one of Coinflip’s ATMs that currently offers 10% off transaction fees when you use promo code “99BTC”.

The map also allows you to search for Altcoin ATMs if you want to buy/sell other cryptos. Every ATM takes a commission from each trade, the amount varies from one device to another, so make sure you’re aware of the fees which are usually stated on the machine.

6. Regulations for Operating a Bitcoin ATM in the US

Below are four key elements around which you can build your compliance strategy, prior to launching a Bitcoin ATM:

Research money transmitter requirements in the state of operation

It’s important to understand that some states are friendlier to Bitcoin ATMs, or Bitcoin in general, than others. This could mean the difference between a comprehensive and costly state licensure process and an exemption under state money transmitter law.

The differences are as vast and they are ever-changing. States continue to evolve their application of existing and antiquated money transmission law.

As of September 2020, 49 states share unified regulation for cryptocurrency firms, so as to accommodate bitcoin companies.

That said, it’s vital to understand the requirements in your state. You can check the latest laws that are applicable to your specific state here.

Register as a money services business (MSB) with FinCEN

It might be difficult to believe, but registering with FinCEN, the nation’s top money laundering watchdog, might be the easiest compliance task. It’s literally a “check-the-box” activity. Indeed, in contrast to the permission-based state licensure process, at the federal level, entities merely register with FinCEN via an online portal.

The process can typically be completed in under an hour. While registering with FinCEN is a simple exercise, it comes with much responsibility. By checking the boxes, so to speak, you are agreeing to be regulated by FinCEN and thus to meet certain requirements to the satisfaction of regulators.

This includes, among other things, registering at the state-level, if applicable: Developing and implementing an anti-money laundering (AML) program, retaining certain transactional information, and reporting suspicious activity and transactions over $10,000.

FinCEN regulation requires implementation of a written AML program. An effective AML program is one designed to prevent your Bitcoin ATM from being used to facilitate money laundering activities. Each AML program must be in writing and address, at minimum, the “four pillars” as follows:

Start by running some sample transactions from your Bitcoin wallet through the terminal(s). Be sure to test your thresholds to ensure that proper know your customer (KYC) requirements are triggered, as well as any “red flag” indicators of potentially suspicious or unusual activity.

Be sure to confirm that customer and transaction information is properly obtained and recorded. In so doing, document your findings, especially any subsequent changes to your AML program as a result of this testing.

Bitcoin ATMs are a very convenient way to buy and even sell Bitcoin very quickly and sometimes even anonymously. While most BTMs operate more or less the same way, it’s always recommended to check for the fees on the BTM you’re planning to use.

Also, as a precaution, I’d even video the whole buying process so you’ll have proof if something goes wrong.

A special thanks to Joe Ciccolo, the founder & president of BitAML for adding his knowledge about Bitcoin ATM regulations. He can be reached at [email protected]. Have you had any experience with Bitcoin ATMs? I’d love to hear it in the comment section below.