Skip to content
You are at: Home » What is Bitcoin?

Just Explain It Fast — Like I’m a Five Year Old

Bitcoin is a payment system, which is so revolutionary it gives Bitcoin its value. Imagine an Excel spreadsheet with a list of account balances. This account owns this much, that account owns that much, etc. To send money, the balances just get subtracted from and added to. That’s it.

Now imagine this Excel file is duplicated and synced across the world with a peer-to-peer system like BitTorrent. That’s the essence of Bitcoin. [1]

But Why Is Bitcoin a Big Deal?

Because nothing like Bitcoin has ever existed before and it may have a profound effect on personal financial freedom and global commerce. Here’s some of the most important things about Bitcoin that make it a game-changing technology: 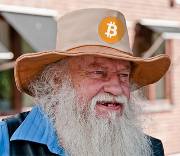 Bitcoin is a gonna change the world. But there’s a lot of complications to it — hell, even most computer geeks don’t understand what Bitcoin is or how it works.

So I made this here website. It’s just a humble attempt, by a common hillbilly, to explain the basics of Bitcoin… without making folks go cross-eyed.

What You Oughta Know About Bitcoin

The articles below will get you started with the fundamental basics of Bitcoin. Dig in and enjoy!