Skip to content
You are at: Home » What is an IEO?

The Complete Beginner’s Guide to IEOs

Initial Exchange Offerings (IEOs) have become extremely popular in the cryptocurrency universe. In this post I’ll explain exactly what an IEO is and what you should look out for before investing in one.

Don’t like to Read? Watch our Video Guide Instead

What is an IEO Summary

An IEO is an ICO managed by an exchange. The advantages of an IEO is that it is regulated and listed on the exchange from the get go. Investors can also feel safer knowing the exchange vetted the project listed.

That’s an IEO in a nutshell. If you want a more detailed explanation about IEOs keep on reading, here’s what I’ll cover:

Note: While the purpose of this post is to bring clarity to many confusing terms, I’ve already covered ICOs and STOs in previous posts. I strongly suggest you start by reading them if you haven’t done so already.

ICOs, STOs and IEOs all have the same purpose – they are all ways companies can use to raise funds for their projects.

ICOs were the first to come about. With an ICO the company raises funds by selling tokens directly to investors at a discount. These tokens can either have some sort of utility in the company’s project or represent an actual tradable asset like a share in the company.

ICOs are the wild west of fundraising. They have no oversight, no regulation, and in some cases are complete scams. There are no rules for an ICO – as long as you manage to get investors on board – you’re good to go.

However, the lack of oversight caught the attention of quite a few regulatory agencies, causing them to crack down on many companies who conducted ICOs.

This, in turn, gave rise to the STO.

You can think of an STO as a regulated ICO. There are two main differences between an ICO and an STO:

And now we come to IEOs.

IEOs are ICOs managed by a cryptocurrency exchange. So instead of a company selling tokens directly to the public, in an IEO everything is done through an already-existing trading platform.

The company conducting the IEO pays a listing fee and gives some of its tokens to the exchange. In return, the exchange takes on the responsibility of making the IEO succeed, by taking care of the various aspects such as marketing, securing funds and vetting investors.

The exchange then lists the IEO on its website and the token sale is conducted through the exchange. Once the IEO timeframe ends, the tokens are immediately listed on the exchange for trading.

Here are some additional things you should know about IEOs:

Unlike ICOs, IEOs usually aim to raise a moderate amount of money. So you probably won’t be seeing any $150m IEOs.

Also, IEOs are usually classified as utility token offerings. However, due to the ambiguous nature of this classification, most IEOs will probably not be available in the US as exchanges fear regulatory clampdown by the Securities and Exchange Commission.

Finally, companies can conduct both an ICO and an IEO, and many do. Sometimes a company may conduct a private ICO for strategic partners and high net worth individuals. Later on, the token sale will move to an IEO for the general public.

Investors rely on the exchange to vet potential IEO projects, and since the exchange’s reputation is on the line, it has an incentive to do extensive due diligence on each project that wishes to be listed. This means the chance for dubious projects or outright scams is reduced dramatically.

Open to All Exchange Users

This opens up a whole market of investors who otherwise wouldn’t meet the eligibility standards to participate if a token sale were classified as an STO.

In the past, ICO funds were lost due to hacks or theft. With an IEO, the exchange deals with securing investor funds instead of inexperienced startups.

The company selling the token doesn’t need to worry about regulation. The exchange is responsible for vetting its own users and conducting KYC processes.

Probably one of the biggest advantages of an IEO is token liquidity. Once the IEO ends people can start trading its tokens instantly on the exchange. This eliminates what sometimes happens with ICOs where you can’t find a marketplace to trade your newly received tokens.

The exchange can offer the IEO to its existing user base, saving the company the hassle of trying to build a prospect list from scratch.

IEOs are aimed to be a win-win-win situation for exchanges, investors and companies seeking funds. With an IEO, each party can focus on what’s necessary to reach its particular objectives.

The exchange deals with funds and regulation, the company can focus on building its product, and investors can feel safer knowing that a reasonable amount of due diligence was done for each project.

Conducting an IEO costs money and in some cases quite a lot of it. You could say this premium is an investment for the marketing, security and regulation efforts you get from an IEO, but in the end not all companies can afford this.

An IEO is limited to the exchange users. Meaning, if the exchange isn’t available in a specific country, those people are automatically excluded from the IEO.

5. Conclusion – Are IEOs a Good Investment?

As IEOs become more popular, exchanges have started to set up dedicated platforms for them. For example, the Binance Launchpad is a platform dedicated to conducting IEOs on the popular cryptocurrency exchange Binance. 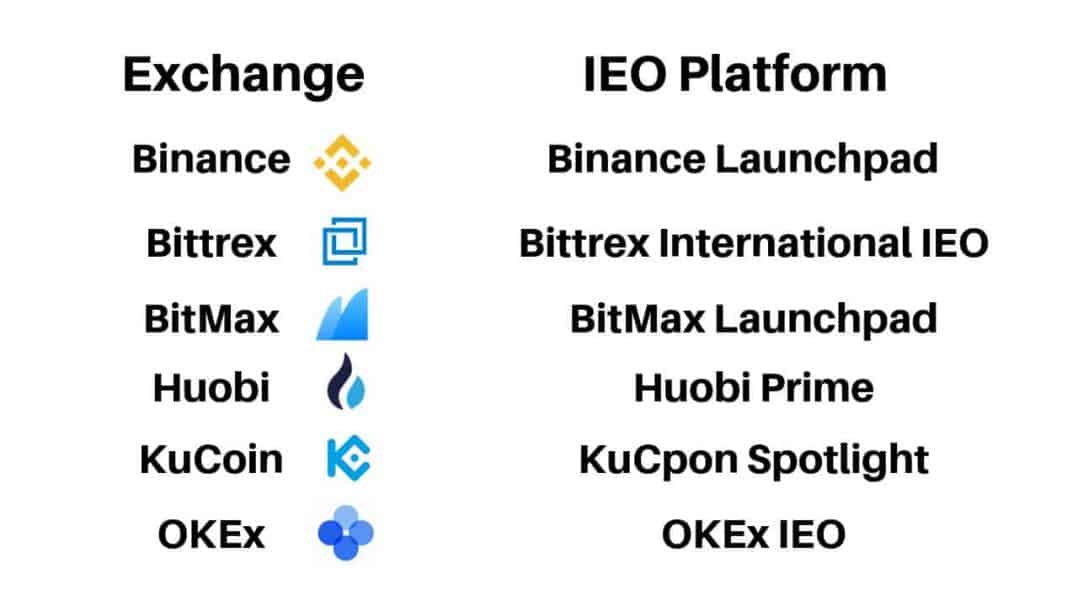 As token sales become more mainstream and regulated, some people believe that IEOs are about to boom just like ICOs did in late 2017.

Will this happen? Only time will tell.

But I will say this – Beware of the hype…

You should do extensive research into each project you consider investing in, and never invest money that you can’t afford to lose.

The majority of tokens end up losing value after their initial offering and many projects don’t even see the light of day.

On top of that, most of these projects don’t even need their own token. And if you’re not really clear on what I mean by that last statement, you’ll want to read my “What is Blockchain?” post to learn a bit more before starting to invest.

Have you had any experience with IEOs? If so, I’d love to hear about it in the comment section below.