Skip to content
You are at: Home » FAQ » Basic Questions » How to Read an Ethereum Transaction

Although 99Bitcoins has been around for a while, it just occurred to me that we’ve never really covered the basics of Ethereum transactions even though we’ve discussed Ethereum itself. So this post is aimed at all of the Ethereum newbies out there: let’s understand how to read an Ethereum transaction.

Let’s take a look at a random Ether transaction via EtherScan. 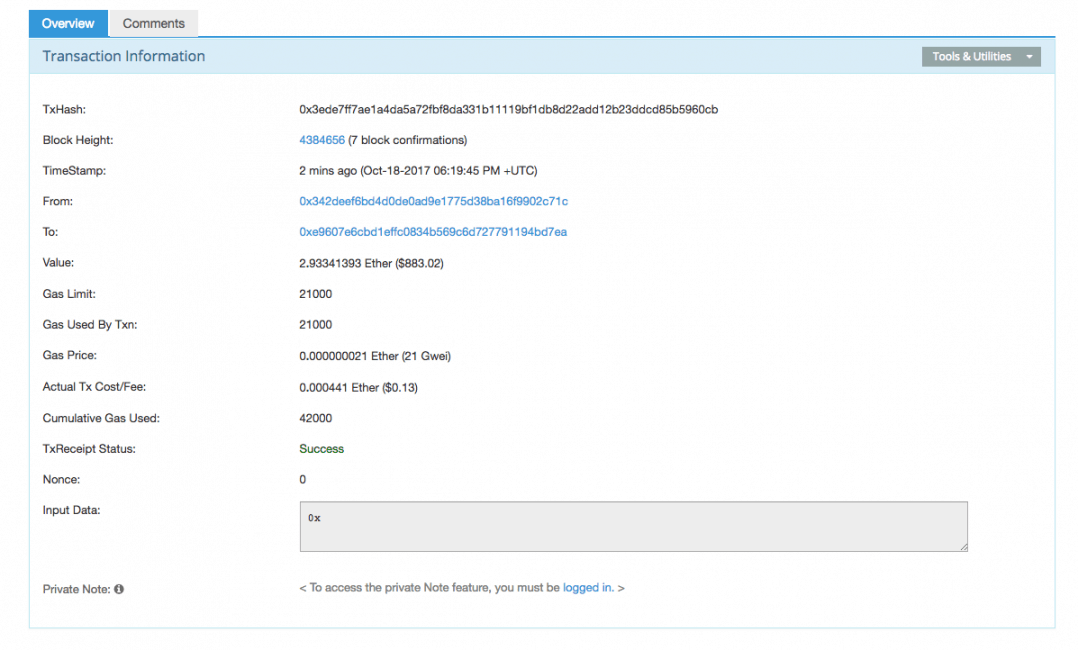 Now let’s break down the data that are displayed:

TxHash – Also known as the transaction ID, TxHash is a way to look up a specific transaction on the Ethereum blockchain.

Block Height – The block number in which the transaction was included (for an in-depth explanation of blocks, watch this video)

Time Stamp – The time the transaction entered the blockchain (i.e., the time the block was mined)

Value – How much Ether was sent and the equivalent USD value

Before we move to the rest of the terms, let’s look at a short explanation of “gas.” Gas in Ethereum is somewhat similar to transaction fees in Bitcoin. Each operation on the Ethereum network requires a fixed amount of gas (adding two numbers costs 3 gas, calculating a hash costs 30 gas, and sending a transaction costs 21,000 gas, for example).

Gas is paid in Ether, but you can’t own gas. It’s just calculated at a fixed gas/ether exchange rate when you send a transaction on the Ethereum blockchain. We’ll talk more about gas in a different article.

Cumulative Gas Used – The total amount of gas used when the transaction was executed on the block. This doesn’t have any real meaning for us at this point.

Nonce – A sequential number tied to every transaction that represents the number of transactions the sender account has made on the network. So for example, the first transaction an account sends will have a nonce of 0, the second a nonce of 1, and so on.

That’s it! You now know the basics of how to read an Ethereum transaction.

7 comments on “How to Read an Ethereum Transaction”