Skip to content
You are at: Home » Hardware Wallets » Ellipal review

The Ellipal (short for elliptic curve cryptography + pal) raised $55K in an Indiegogo campaign in order to create a completely isolated hardware wallet. In this review, I will research the company itself and its product – the Ellipal hardware wallet.

The Ellipal wallet is a hardware wallet that aims to be completely isolated from the outside world. It has no wired or wireless connectivity and it communicates through QR codes via a camera on the rear end. It costs $149 and is relatively new to the market (i.e. not battle tested).

If you want a more detailed review of Ellipal keep on reading. Here’s what I’ll cover:

1. Hardware Wallets and the Ellipal’s promise

A hardware wallet is a device that keeps the private key to your Bitcoins offline, so that hackers won’t be able to steal them remotely.

Ellipal is said to be 100% secure since it’s completely isolated from any computer, unlike competing hardware wallets (this can be read on Ellipal’s site and on online reviews).

However, hardware wallets like TREZOR and Ledger that do connect to your PC via a USB cable, are also designed in a way that no outside attacker can view your private key. For example, even if you connect your TREZOR to a compromised computer that is infected with viruses your private keys are still safely secure.

Additionally,  some might argue that while Ellipal’s claim is nice in theory, there’s no way to validate it i.e. tell whether the company actually implements this promise on the device in full.

Ellipal’s source code is only partially open, so similar to Ledger, they have a Github available that shows their Cross-chain wallet framework as well as their JS-Lib for any App developer to work with them.

For comparison, both leading hardware wallet manufacturers today (TREZOR and Ledger) have a considerable amount of their code stored on public repositories, like Github. Thanks to this, the crypto community can routinely inspect the code, adding another layer of security. So, while Ellipal may be secure due to the fact that it’s “disconnected” from any computer, it doesn’t mean the competition is any less secure.

When it comes to hardware wallets I want to make sure I know who stands behind the product and their reputation. It’s hard to find a lot of information on Ellipal and the existing about page is pretty limited. This led me to do my research on Linkedin and other sources.

Ellipal is a privately held company established in Hong Kong in 2017. As for its founders, I can’t say I’ve heard about any of them or ever saw them in active community debates. The Indiegogo page doesn’t have any information about the team as well.

While all of this isn’t really a deal breaker in my opinion, it does make me a little uneasy, especially when we’re talking about a device that should hold the majority of my funds.

The first thing I noticed is how big the device is. It’s almost 4 times bigger than the Ledger Nano X. 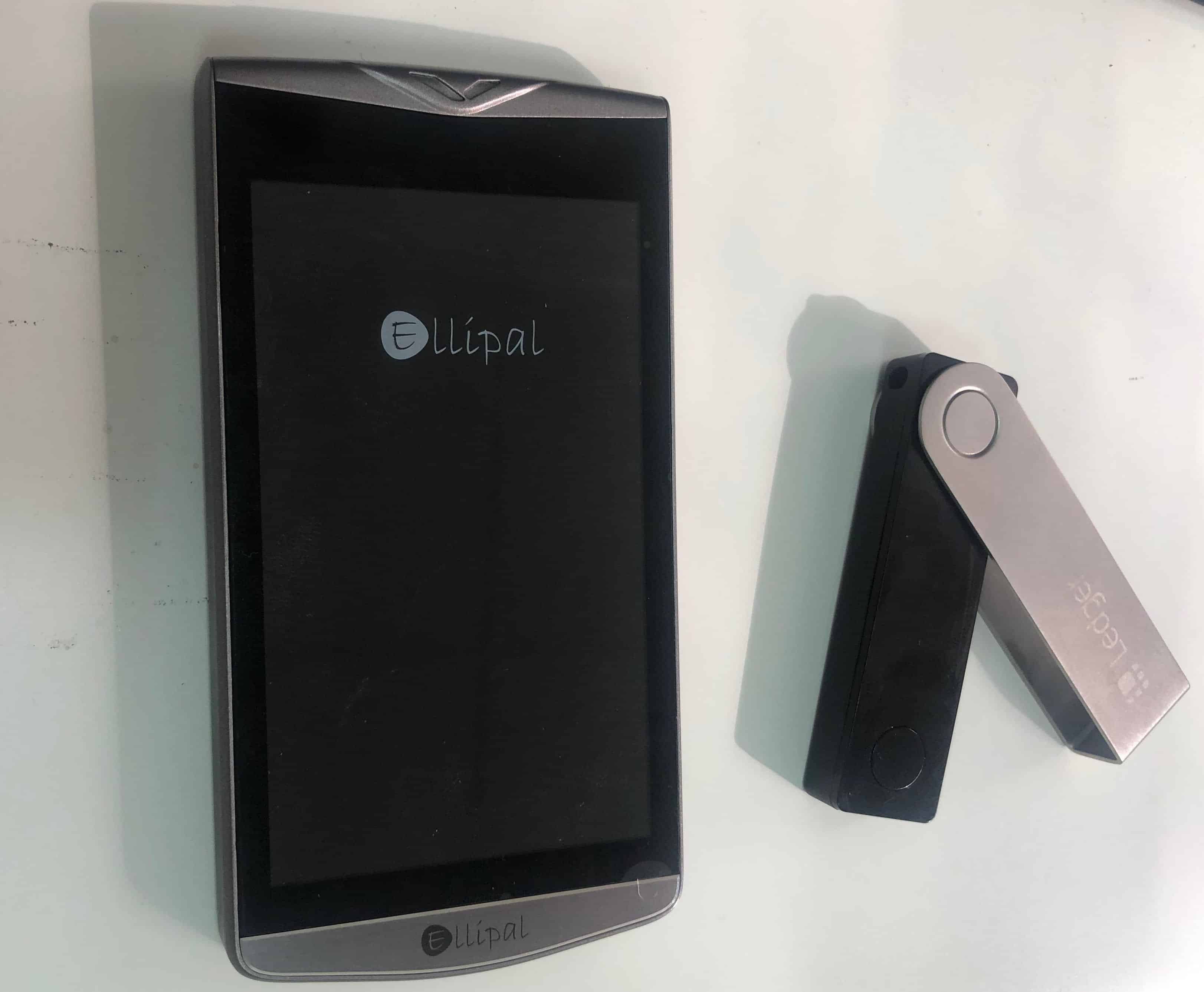 Also, the build of the device feels a bit cheap. I can’t put my finger on what gives me this feeling exactly, but you get a whole different feeling when unboxing the Ellipal, as opposed to other hardware wallets like KeepKey or Ledger.

The box comes with the Ellipal wallet and a charging cable. While you might think the cable is there to plug the Ellipal to your PC, like you would with almost any other hardware wallet, that’s not the case. The only reason for the micro USB port on the Ellipal is to charge it.

The only way the Ellipal communicates with your mobile phone is via QR codes. That’s why it has a camera on its rear end. This is the main security promise from Ellipal – since the device has no “outer world” connection it can’t be compromised remotely. 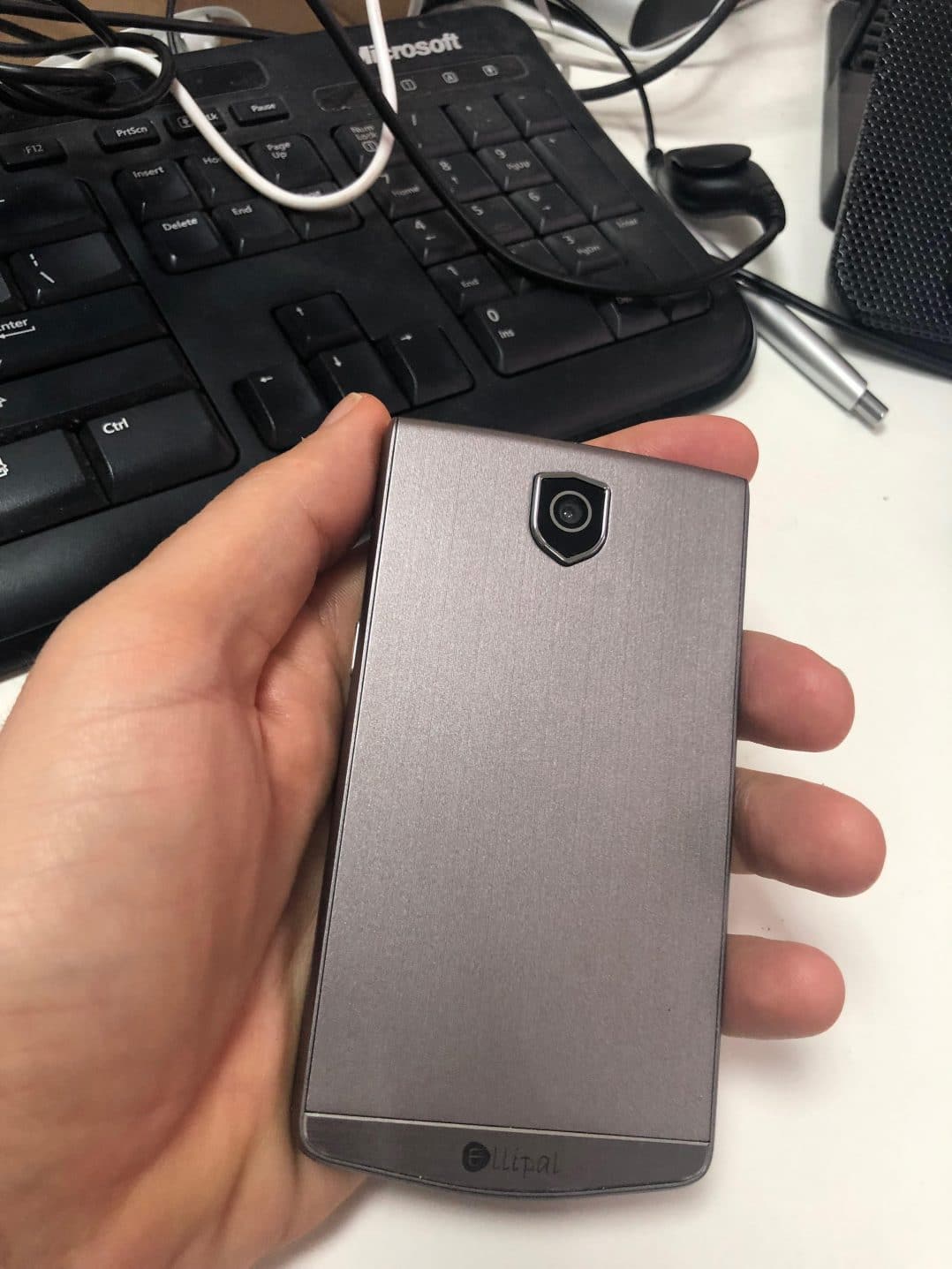 The mobile app (available for iOS and Android) is simple but well built. In fact, the whole setup process for the Ellipal was relatively seamless. The touchscreen works flawlessly and taps are recorded quickly and accurately. So, while the hardware may look a bit clunky, the software seems to work great.

Ellipal has several ways of protecting your device, such as a pattern lock screen and a password protection for your account. If you fail the lock screen 10 times or forget your password, you will need to restore your wallet from your seed phrase.

The device supports both 12 and 24 seed phrases or anything that follows BIP39 standard. Ellipal also supports import of private keys which some hardware wallets don’t allow.

For me, the most disappointing part of all is how you upgrade the firmware on the Ellipal. Since the product is isolated from any computer interaction, you actually need to download the firmware update to an SD card (included) and then insert it on the backside of the Ellipal. This is a very cumbersome process, even for technically oriented people. 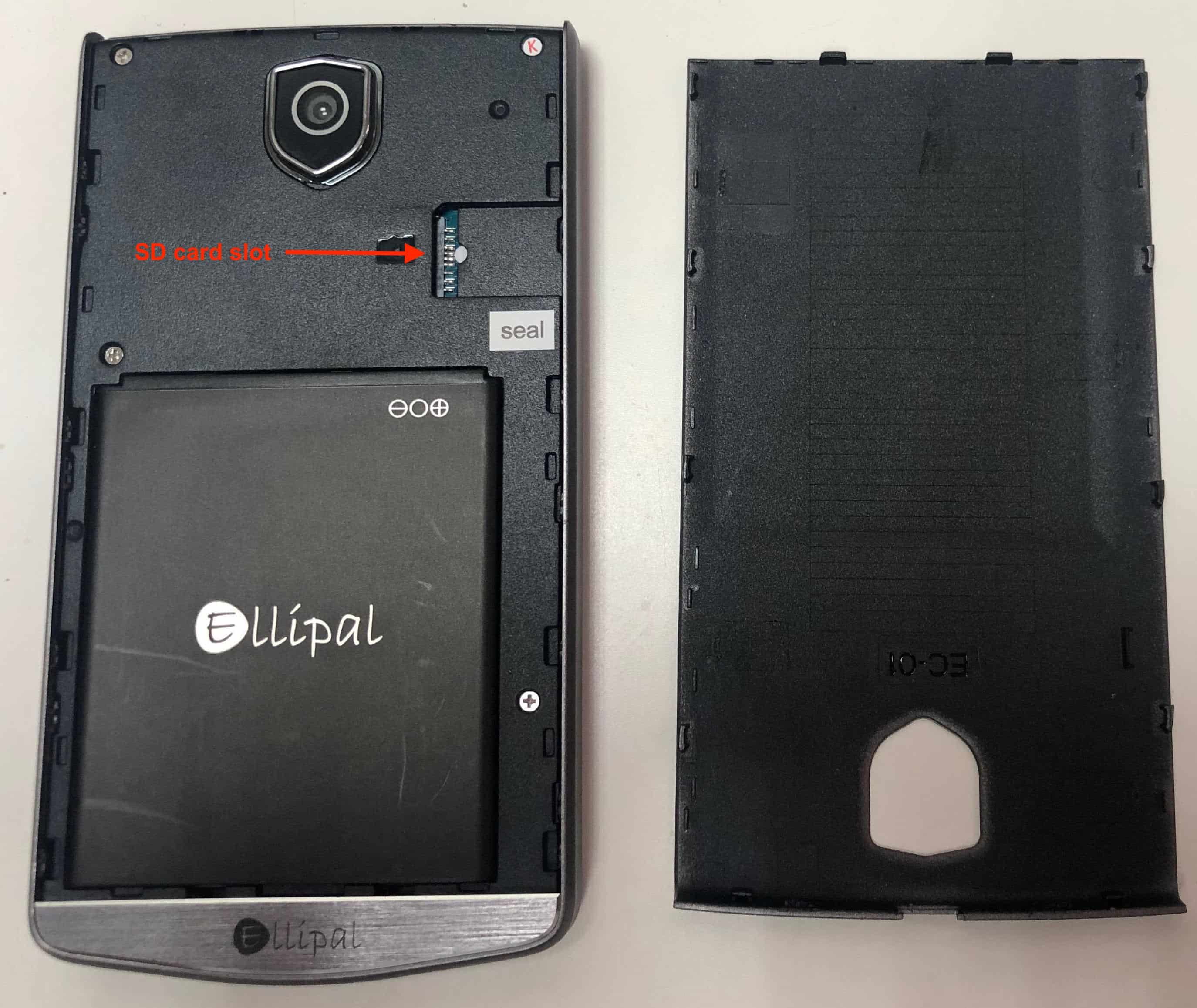 Unlike other hardware wallets that connect to a PC, the Ellipal has its own internal rechargeable battery. I didn’t stress test it too much, but I don’t consider it a drawback, especially considering that a hardware wallet isn’t something you use too frequently.

To sum it up, if I look at the Ellipal just from a product standpoint, it’s pretty solid. It works as advertised and aside from some missed expectations, you’ll experience a smooth ride.

This is a relatively robust list which will fit most crypto users.

At the time of writing, the Ellipal wallet costs $149 (or two for $248). This does not include shipping costs. The product comes with a 16GB micro SD for software updates. This is one of the highest priced hardware wallets on the market today.

6. Ellipal vs. TREZOR and Ledger

If I compare the Ellipal to the current market competition it falls short on several accounts.

First, it’s way too big to carry around comfortably. Second, it doesn’t support 24 word seed phrases. Third, its firmware update process is a pain in the ass. Last but definitely not least, it’s more expensive.

On the plus side, its interface is one of the best I’ve seen, and I dare to say it even beats the current experience TREZOR and Ledger will give you.

Regardless of the above, I think the most important aspect doesn’t have to do with the product at all, but with the company. Both TREZOR and Ledger have demonstrated time and time again their commitment to security throughout the years.

Sure, both had their share of criticism but they’ve always stood behind their product and I’ve never heard about funds stolen remotely from their devices. They have been time tested, which is the most important test of all, at least in my book. This is not something I can say about Ellipal.

A good example would be Bitfi, a hardware wallet founded by John McAfee that claimed to be unhackable but was found to have some serious flaws in its design. If your product is flawed you can be sure that the crypto community will find out about it sooner or later.

7. Conclusion – Is the Ellipal Worth it?

The Ellipal is a brave attempt at creating a very user-friendly hardware wallet. If it will succeed or not remains to be seen. The software works great while the hardware has a somewhat cheap feeling to it.

Personally, I wouldn’t use this wallet until it’s more battle-tested, especially since I can’t see any real advantage over the established TREZOR and Ledger wallets.

Have you used Ellipal yourself? I would love to hear what you think about it in the comment section below.