Skip to content
You are at: Home » Bitcoin » Historical Price » Price Predictions

Predicting the price of Bitcoin accurately has proven to be a difficult task. Still, the difficulty of divining the future doesn’t stop people from continuing to make predictions about Bitcoin’s price.

In this article, I’ll share with you 6 price predicti20ons for Bitcoin in 2021, all made by notable figures in the crypto space.

Bitcoin is said to be worth anywhere from $55,000 to $318,000 by industry experts such as Anthony Pompalino, Mike Novogratz and Thomas Fitzpatrick. Keep in mind that price predictions are guesses at best, and certainly shouldn’t be taken as financial advice.

For more details on the various predictions keep on reading, here’s what I’ll cover:

In a letter to investors in October 2020, well-renowned Bitcoiner and Morgan Creek Digital Assets co-founder Anthony Pompalino has outlined why he thinks Bitcoin could reach $225,000 by the end of 2021. However, he says the ascent is bound to be a bumpy one:

The asset is volatile, and it won’t be a straight line up. There will be many 15-30% drawdowns along the way, but I remain convicted that these price levels are attainable in the next 15 months.”

The prediction comes with plenty of reason, noting that the available supply is actually much smaller than people realize, whereas demand for Bitcoin is beginning to skyrocket.

He also goes on to cite the Federal Reserve cutting interest rates to virtually zero for the foreseeable future, quantitative easing in the form of COVID-19 stimulus packages and Wall Street beginning to jump on board with digital assets.

Mike Novogratz, founder of financial services company Galaxy Digital, believes that Bitcoin could hit between $50,000 to $60,000 by the end of 2021, also citing fears of quantitative easing and a lack of trust in governments and central banks.

“People are worried that governments printing more and more fiat are less trustworthy.”

Novogratz says that it’s no longer just niche individual investors buzzing about Bitcoin, but institutional investors are now looking at it as a serious investment.

He also believes that Bitcoin fits into a technological world built around social-media, saying “In a world of social media, bitcoin is social money”.

Surprisingly, Novogratz provides the most conservative estimate of all our featured predictions, with his upper limit of $60,000 giving Bitcoin a total market cap of just over $1.1 trillion – still only a fraction of that of gold.

The creator of the Stock-to-Flow model – a pseudonymous investor who is known simply by the name “PlanB” – has used the model to forecast that Bitcoin will reach $100,000 by December 2021, and could reach as high as $288,000. 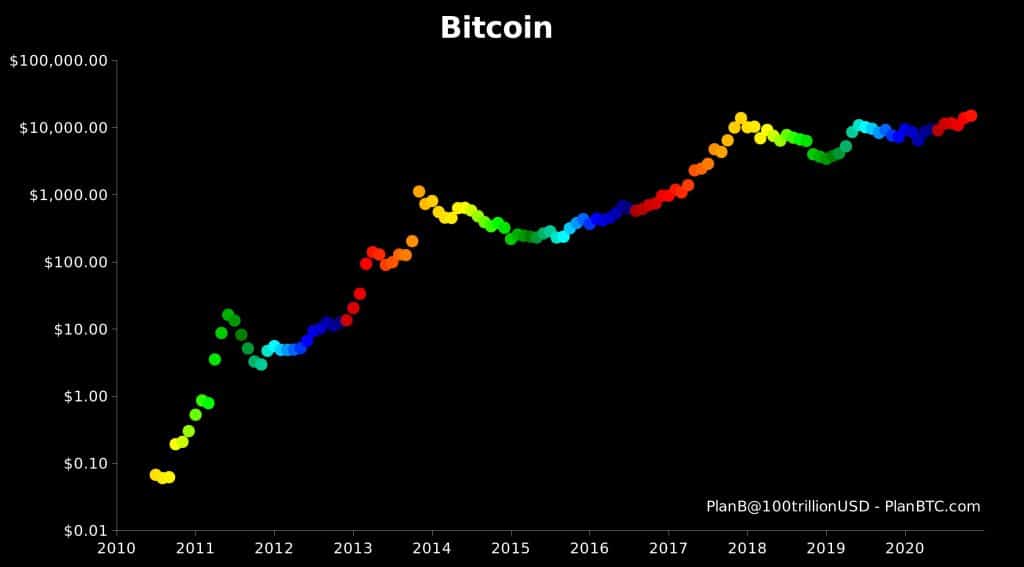 The popular Stock-to-Flow model estimates the future price of Bitcoin by taking account of its existing supply and its rate of new supply – the latter of which halves every four years in a phenomenon known as a “halving”.

“I have no doubt whatsoever that #bitcoin S2FX is correct and #bitcoin will tap $100K-288K before Dec2021. In fact I have new data that confirms the supply shortage is real. IMO 2021 will be spectacular.”

To date, the model has tracked the price of Bitcoin almost perfectly. The only question now is, will it continue to stick?

Dan Morehead, Founder and CEO of blockchain investment fund Pantera Capital, predicted that Bitcoin would hit $115,212 by 2021 in a blog post on Medium.

“I realize that price may sound ludicrous to some today. But, $5,000 sounded equally ludicrous as our first written price forecast when we launched Pantera Bitcoin Fund at $65 /BTC.”

The estimate was based on previous advances in Bitcoin’s price, with Morehead also giving a nod to the Stock-to-Flow model.

Morehead also referenced Bitcoin’s 215% compound annual growth rate (CAGR) over its lifespan, as well as its lack of correlation to other major assets and ability to rise in an economic crisis. He expects this growth rate to continue or accelerate over the next two years.

Thomas Fitzpatrick is the global head of Citibank’s CitiFX Technicals product, which provides market analysis for its trading clients.

Fitzpatrick’s report was leaked on Twitter in November 2020. It drew similarities between Bitcoin and the gold market of the 1970s, which broke out after the US dollar came off the gold standard in 1971:

‘That surge, as it came into the mainstream, was very reminiscent of what happened with Gold as it was allowed to float in the early 1970’s after 50 years of trading in a $20-$35 range.”

The report went on to use technical analysis of previous tops and bottoms in Bitcoin, to estimate it hitting up to $318,000 by December 2021.

Fitzpatrick, like many of the others, expects Bitcoin to explode in value due to central banks aggressively pursuing quantitative easing, accelerated by the COVID-19 pandemic.

Tyler Winklevoss, co-founder of cryptocurrency exchange Gemini, has continuously predicted that Bitcoin will replace gold as a store of value, eventually reaching a $9 trillion market cap.

Winklevoss (and his twin brother, Cameron) predict a surge in both retail and institutional investment, eventually resulting in a price of $500,000 per Bitcoin.

Although the prediction isn’t explicitly for 2021, the Winklevosses believe the price will be reached within the decade.

Is Bitcoin a Good Investment?

According to our very own HodlCalc, buying and holding Bitcoin has been profitable for over 99% of its lifetime.

However, investing in Bitcoin is a very abstract term as there are many forms of investment. It’s best to invest in Bitcoin only after getting a good understanding about what the currency is all about and the technology behind it.

Nobody can predict what will happen to the price of Bitcoin, however it appears that institutions and “big money” are becoming much more involved in the space.

Further, the COVID-19 pandemic has pushed central banks to print more money to stimulate economies and keep businesses afloat – causing a lot of concern about inflation.

As institutional money continues to flow into Bitcoin, sucking up all of the newly minted supply it seems logical that the price will continue to rise, attracting more media attention followed by retail investors that may create a bigger price bubble than 2017.

This bubble will eventually pop and Bitcoin will “collapse” to a level that is still higher than what it was before the bubble began. If I’d have to attach numbers to this prediction I would say 1 BTC would reach somewhere around $100,000 before correcting downwards to the $50K-$60K level.

These six experts have given us a wide range of predictions. Their predictions are based on their understanding of market dynamics and no doubt colored by their own opinion of cryptocurrency’s potential.

Their price predictions are guessed at best, and certainly shouldn’t be taken as financial advice. In fact, their views are so contradictory that one would be hard-pressed to take any sensible market position based on their views as a whole.

That their perspectives on the same subject are so wildly different just confirms that human beings all operate within their own reality bubbles.

That being said, I highly encourage you to invest the time and energy necessary to understand the market before taking any positions with real money.

Consider these expert’s opinions as a factor in your judgment and decision-making process, but definitely take them with “a grain of salt”.

I’m curious to know what you think. Go to the comment section right now and let me know which one of these experts do you think is correct?