So I know I’m a bit late on the March update since I usually do these at the beginning of the month, but here it is….

March was CRAZY, and in a second you’ll see exactly why. I assume this is going to be a shorter update than usual, since as Milli matures there’s less to be learned. However, I promise you this post will be as eye opening as the ones before it. If you’re totally new to this “Making Money with Bitcoin Faucets” series, please check out the previous posts before reading any further:

I have no actual explanation for this other than running my faucet without any downtime and paying my customers on time. What I mean is, there are so many amateur faucet owners out there who don’t take care of their customers, that once people find a reliable faucet, they’ll repay you by bringing in more traffic and sticking around longer. Of course, they don’t do it for free – they get a referral commission, but overall, the faucet is still profitable.

So, once again, I was faced with the issue of outgrowing my server. After consulting my developer I decided to move to yet another hosting company that is much more suitable for scalability – Digital Ocean. However, if you’re just starting out or don’t have any technical knowledge, you should stay away from them, since they require some programming skills. 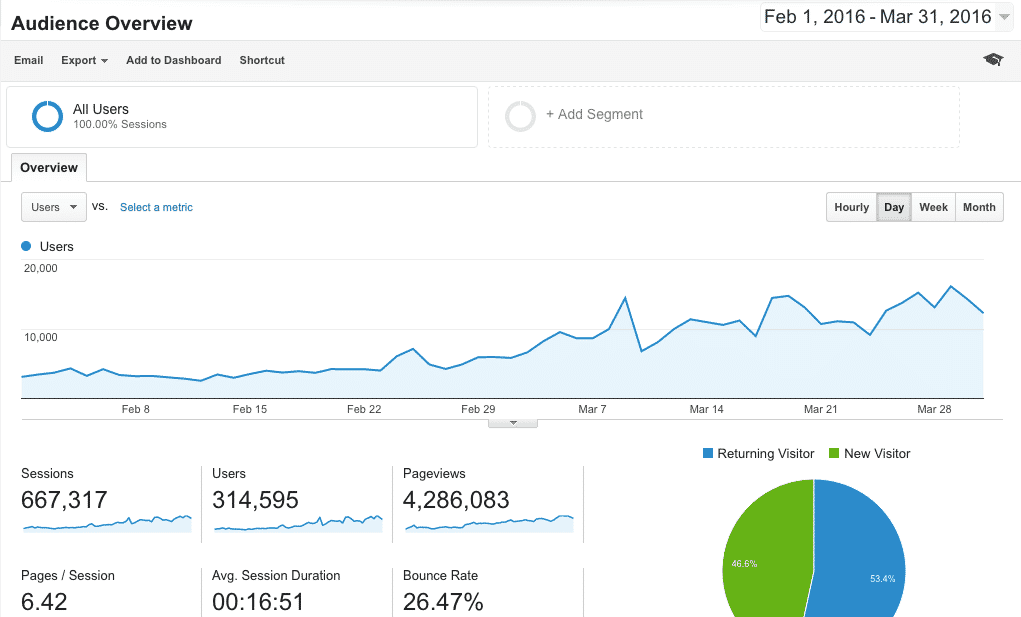 One thing I’ve noticed about growing my traffic is that as the number of users grows, other valuable metrics are going down:

So this new traffic (I have 51% new visitors in March as opposed to 33% in February) is definitely less engaged with the faucet. My guess is that as the faucet grows more and more people start referring traffic to it, and since they are bringing un-targeted traffic, this is the result.

The good news is that even if the traffic is less engaged, I still get paid if they see / click the Adsense ads. So, though I would prefer a more engaged audience, I definitely can’t complain…

The #1 concern as your Bitcoin faucet grows

As Milli becomes more and more popular, it attracts the attention of spammers and hackers. Here are the main threats to the faucet as I see them:

My first concern is dealt with pretty easily – I just don’t put that much money into my faucet’s wallet and hope that FaucetBox is doing a good enough job in securing my coins. For those of you who are new to this post, FaucetBox is the company that manages the payments of my faucet.

My second concern is unlikely at this stage, as I don’t see anyone actually profiting from taking Milli down. However, in order to prevent this in the future, I’ve added CloudFlare protection for Milli. CloudFlare is a service that protects and also accelerates your website through what is known as a CDN.

A CDN (Content Distribution Network) is a network of computers around the world that all have a “copy” of your website. Whenever someone wants to reach your website, the closest copy is used in order to give them the best performance. The system also monitors threats and attacks to your website, and blocks any suspicious-looking activity. Here’s a complete explanation by the CEO if you want to know more.

My third concern is probably the most relevant one. I’ve noticed a lot of people trying to drain Milli using different tactics. What they will do is either use bots or some other manipulation in order to be able to claim every few seconds. Usually, they will also claim these coins under one main referral address so that they will profit twice: once from the direct claim, and once from the referral.

Most of the time and money I spent in March was to deal with Milli’s security. I won’t be detailing exactly what I did here, since I don’t want any scammers to know my tactics. However, if you find yourself the victim of spammers/hackers, my best advice would be to hire a freelancer who knows how to stop them. That’s what I did; it wasn’t cheap, but it was worth it overall.

Here’s how my payouts were affected by different spammer attacks: 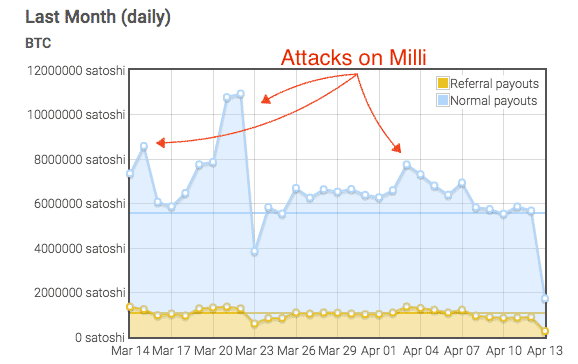 Keep in mind that there isn’t one magical bullet to stop spammers/hackers, so even if I showed you what I did, it wouldn’t necessarily work in your case. Each attack is different and should be addressed separately. Just be ready for it, and don’t panic when you get there; it’s the natural evolution of a faucet, I guess.

One very popular way to reduce these attacks is to generate some sort of a sign-up process for your site. However, since I want my users to have the best experience possible on the site, I’ve decided to shy away from this tactic for now.

So how do you know you’re under attack?

Some people may ask, “How can you be so sure you were attacked by spammers? Couldn’t it just be that more real traffic came in so the expenses grew?”

That may be the case, but here are some pointers to help you know you’re under an actual attack:

It’s important to remember that Google analytics only counts “real” visitors. I have no idea how they do it, but they do. So, in case you’re being attacked, it won’t show up in Google Analytics. In other cases, sometimes, a faucet user may run a low-quality ad campaign for your faucet and bring in a lot of real low-quality traffic. In this case, you may see an increase in Google Analytics but not in the payouts.

Now for the fun part. First, let’s take a look at Milli’s Adsense earning for March:

So Milli made $1592.45 in March, which is a GIGANTIC leap from last month ($767.22). However, you can see that even though I quadrupled my traffic, I only doubled my revenue. This, again, is evidence that most of this new traffic I’m getting is of lower quality.

Coinad brought me Bitcoin income of 0.84015194BTC, which I will later deduct from my Bitcoin expenses: 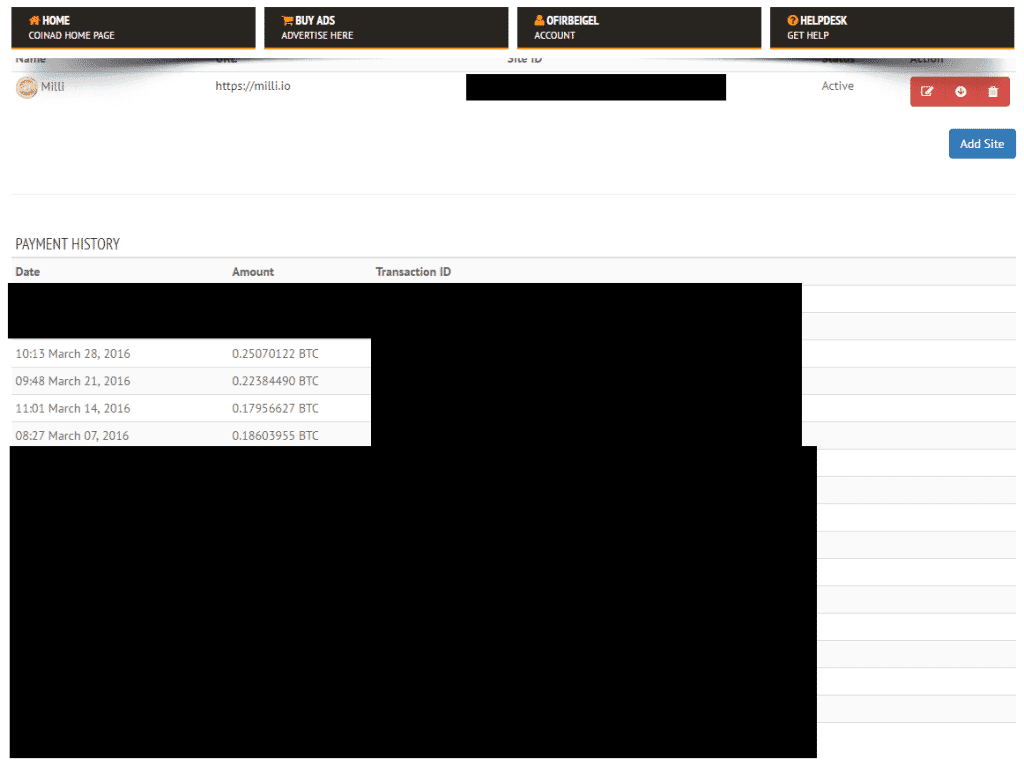 My payouts for the month of March according to FaucetBox have been 2.01893276BTC. I’ve also spent around $80 on improved hosting and $590 on securing Milli from spammers using a dedicated freelancer.

After deducting Coinad’s earnings from these expenses, this brings the total expenses of Milli on March to $1165. So the total profit I made with Milli in March was $427.3 (a 4% drop from last month).

I know this doesn’t seem very exciting, and some of you may be going, “You told us all of this just to show us the same profit as last month?!?” For those of you who are actually thinking this, keep in mind the following:

99Satoshis is in the making

To sum things up, it feels to me that Milli has reached a somewhat steady state. So, as sad as it is, this will be the final episode in this series of “How to Make Money with Bitcoin Faucets”. From now on, I will focus mainly on driving more traffic to Milli and also on the brand new independent faucet I’m creating – 99Satoshis.

99Satoshis isn’t operational yet, but hopefully it will be by the end of this month. I’m going to try to replicate the success Milli had with this independent faucet – meaning it’s not connected to Faucetbox; I will manage payouts on my own.

I hope you enjoyed this series of posts and that it helped you in creating your very own faucet. As always, if you have any questions or comments about Milli or your own faucet, feel free to leave them in the comment section below.