If you haven’t read my original post about how to make money from Bitcoin faucets, you should do so now. Also, there is one additional follow-up post that is important for you to read before reading this post.

For those of you who haven’t been following the previous posts, here’s a fast recap of what we’ve learned so far:

What changes did I do on-site to increase Milli’s earnings?

At the end of my last post, I talked about changing Milli’s design. Here is how the site looked initially using the default FaucetBox template.

Since I wanted to brand Milli under 99Bitcoins’ design, I hired a freelancer and used 99Bitcoins’ theme for Milli’s content as well. I also made sure to add some pages with original content about Bitcoin faucets and how to make money with Bitcoin, and also installed a plugin that aggregates Bitcoin news from around the web (called RSS aggregator). 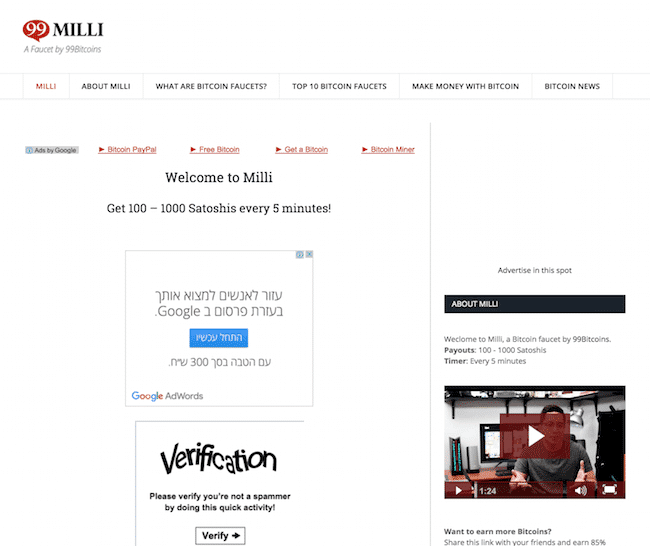 As you can see, it’s not a huge change, but at least the branding of 99Bitcoins is kept. Finally, I enabled comments on Milli’s homepage for two reasons:

Here’s an example of how I engage my customers: 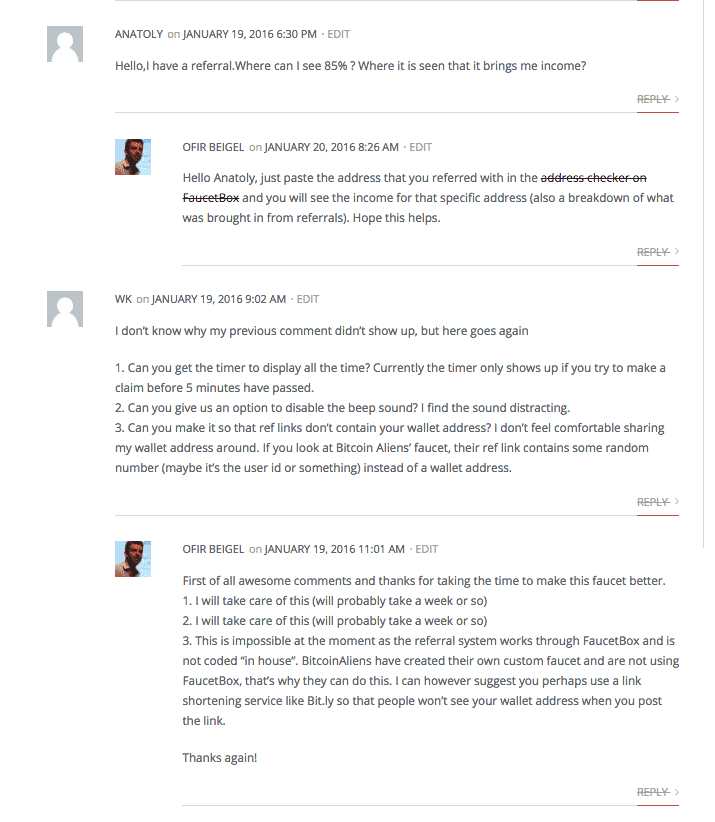 Users are sticky, so make sure not to lose them

One of the conclusions I’ve reached in my previous posts is that I need to lower my payouts in order to remain profitable. However, it seems that I didn’t consider the consequences fully before executing this idea. I initially lowered my payouts to 80 Satoshis every 15 minutes. This, in turn, was the starting trigger for a downward trend in my traffic. My assumption is that the users weren’t very happy with that.

Later on, I tried to do many things in order to gain back that traffic, but once you lose your loyal users, it’s hard to get them back. I increased the payouts to 100 Satoshis (and even added an option for 1000 Satoshis in some cases), I almost doubled the referral payout to 85%, and eventually, I also lowered the timer to five minutes. This means that I was giving away 300 Satoshis every 15 minutes (100 Satoshis every 5 minutes) – 50% more than what the original payout was – but I still couldn’t get my users back.

The payout change also had an effect on the average session duration on the site and the bounce rate (how many users leave the site without viewing more than one page):

Another assumption is that, because I lowered the payouts initially, some of the referring sites to Milli decided to remove it or rank it lower on their list. However, I can’t say any of this for sure.

Test out your ad placements

Another thing I wanted to test out was my ad placements. Even though I knew from talking to various ad owners that it’s best to put your ads in the center of the page, close to where the user is looking, I wanted to see if perhaps placing ads on the sidebar can be more profitable.

Long story short, it isn’t 🙂  But you have to test this out for yourself, since each site is different in its layout (for example, 99Bitcoins’ highest performing ad is actually on the top of the sidebar). Here’s a general heatmap of the optimal places to put ads on a page (red is more profitable): 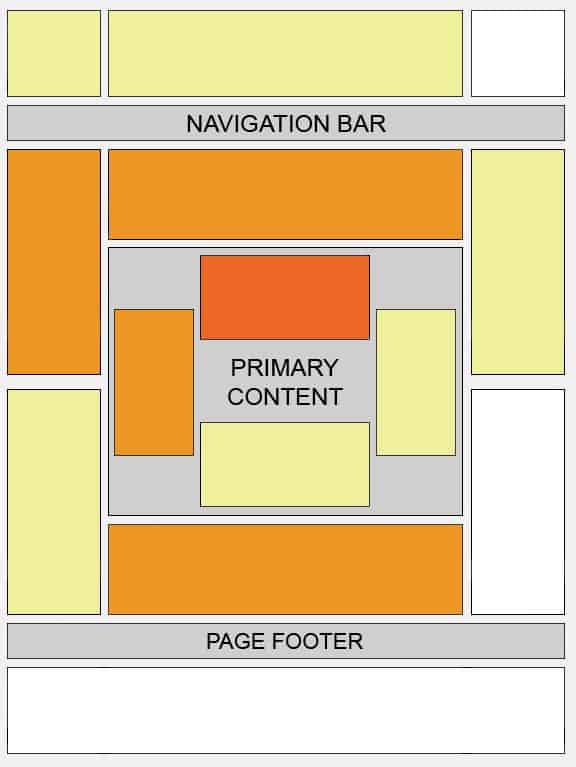 Even though you can use this heatmap as an initial reference, it’s important to test this out for your specific website.

I also decided to add some more ad formats to my site. Apparently, each page on your site can display a maximum of three adsense for content ads and three link units. Placing a link unit at the top of the site turned out to be a good move and added some revenue to the site. 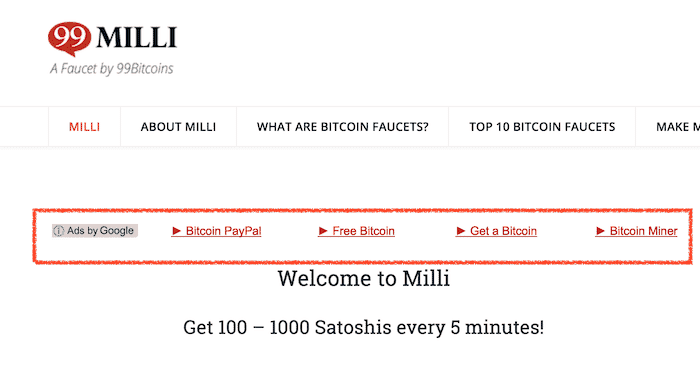 The main thing I’ve dealt with off-site is how to bring in more traffic to Milli. The first thing I tried doing was bringing in traffic through low-cost Bitcoin ad networks such as Coinad, Blockadz, and most recently, Mellow Ads. While it did manage to create a spike in traffic, I’m not sure if it was a profitable move.

It’s a hard thing for me to measure at the moment, since if I spend $20 on Coinad traffic, I’m not sure how much of that specific traffic actually converts into Adsense earnings. The best I can do is try to set the campaign for a defined timeframe (e.g. 24 hours) and see if my earnings in that timeframe exceed the payment for the ads.

As for ad creative, I suggest keeping it simple. Remember to emphasize the benefit for your users in the ad. No one cares about your product’s name or company brand, so there’s no need for them to even be mentioned. That’s why my ads are simply large text saying “up to 1000 Satoshis every 5 minutes”. I figured this would be appealing to people looking for faucets. Here are the stats for one of the ads I run for Milli:

However, I’m still undecided as to whether this type of advertising is worth it. I’m also thinking that perhaps some of the users I gain this way become “sticky” and come back to the site later on, so it’s not just a one-time thing. In the following weeks, I’ll continue my tests with different ad networks (especially Mellow Ads) and let you know what I find out.

In the first post I’ve written on how to manage your Bitcoin faucet, I stated that I got the initial traffic for Milli by buying another faucet on Flippa. Flippa is an online marketplace for websites, and you can find some really great deals on their website from time to time.

Even as we speak, I have my eyes on some Bitcoin faucets that are being sold there, and I would like to redirect their traffic to Milli if I win the auction. However, there’s one more little trick I’ve learned to take advantage of.

Every time a faucet comes up for sale, I ask the owner for access to the faucet’s Google Analytics – that’s pretty much standard practice in order to see if the site is interesting. However, even if I don’t win the auction, I can learn a lot about how that faucet got its traffic by going to the “Acquisition” part of Google Analytics and seeing the acquisition breakdown.

Most of the time, you’ll see that most of the faucet’s traffic is coming from referring websites, and sometimes you’ll find on that list different rotators or referring websites that you didn’t even know existed. Of course, I immediately go over to these sites and make sure to add Milli to their list as well. 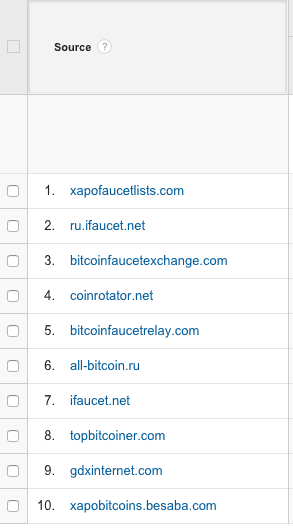 In the example above, you can see some of the referring sites to one of the faucets I’m interested in. Some of these rotators I know, some I don’t – however, this is a gold mine of information.

The part you’ve all been waiting for

And now, for my earnings report for the past 30 days. Here are my Adsense earnings up until today:

So we have a total amount of $618.28 in the earnings corner. And now, for the expenses. Here’s a screenshot from FaucetBox that shows the payments for the last 30 days:

So here’s what’s next for Milli

In all honestly, I still can’t say for sure what bumped my traffic back up after I initially lowered the payouts. I’m guessing this is the main driver for my increased earnings. However, you’ll never be able to figure out everything about your faucet. The best you can do is track whatever you can, try to make logical assumptions, and write everything down.

I can’t stress enough how much value there is in writing every small change you make on your website, since you can never know what impact it may have. I have a spreadsheet in which I write every payout change, design change or any other change that I think may be relevant. Other than helping me write these blog posts, it also helps me track if anything I changed had any additional effects.

In the next month or so, I will probably focus on the following:

I’m also thinking of placing ads from other networks. So that’s it for this month’s update. I hope you enjoyed reading this post and perhaps learned something new for your own faucet. If you have any questions or comments, I’d love to hear them in the comment section below.

Want to make your own faucet? Read my complete beginner’s guide to running a Bitcoin faucet.