Skip to content
You are at: Home » Guides » Make Money with Bitcoin » Making Money from Running a Bitcoin Faucet – My 45 Day Lesson

So it’s been over a month that I’ve been running Milli in hopes to generate some profit. For those to you who are new to this site, Milli, or Bitcoins in general please go and read this post first as I’ve given there a complete breakdown to what I’m talking about in this post.

It’s been a rough 45 days, but I’ve learned a lot. Bottom line I’m still not profitable and there are many reasons for that (we will get to them shortly). However one of the best things that happened to me in the past month is that I met Daniel D’alien from Bitcoin Aliens. He’s the guy who runs Bitcoin Aliens – one of the most successful (if not THE most successful) Bitcoin faucets out there.

So I’ve had a lot of help, a lot of trial and mainly a lot of error 🙂 But I like making mistakes, it means I’m learning something new. So here’s my breakdown of what I’ve learned in the last 45 days. Use this to optimize the profits on your own faucet but remember that each website is different, so what works for me might not work for you and vice versa.

The #1 mistake I did on Milli

The first thing Daniel set my attention to was the ad layout on my site. At the time I was using 3 ad sets from Google Adsense – two at the sides of the site and one in the middle. I’ve changed these ads to 336×280 rectangle ads and placed them in the middle of the page where people are focusing their attention.

This means I’ve placed the ads on the top center of the page and near the “claim Bitcoins” button. It seems that the new layout boosted the ad revenue from $0.33 RPM (revenue per thousand impressions) to $0.40 RPM. So this change alone got me a 21% increase in revenue. Here’s how the site looks today (click to enhance): 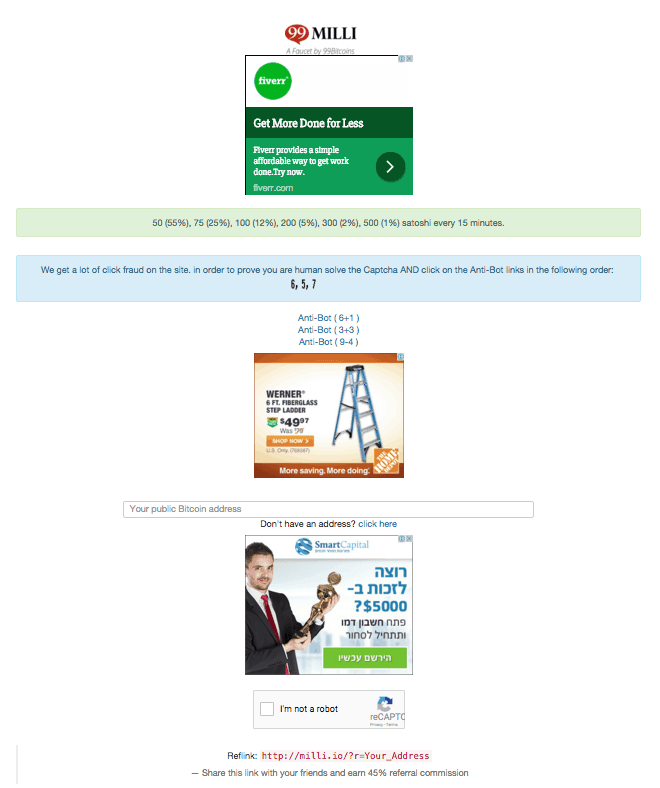 There’s also the fact that I’ve been running only display ads in Adsense (and not display + text). After reading about it a bit I learned that if you run display + text ads you get a much higher RPM. However I wasn’t completely convinced so I ran a test on my Adsense ads. This can easily be done through the Adsense dashboard.

Things that endanger my site

A few things came up during these past few days that got me thinking if I’m doing anything that can actually get me banned out of the Adsense program. First of all it’s advised the you read the Adsense program policies and make sure you’r compliment with them.

After going over these terms it seemed to me that most faucets out there today are actually violating these policies by making their site hard to navigate, putting ads up on pop-ups or placing more than 3 ad placements on their site.

However when I look at Milli the things that I believe are in danger of violating the Adsense policies are:

So as you can see I need to take into account the fact that Google may one day just decide to ban my site because they feel like it. The more scary thought is that they will ban my account since this means I won’t be able to publish any ads on 99Bitcoins as well. However, you can’t just sit on the fence and wait to see what happens so I’m going to try and make Milli better in hopes it will continue to be considered a legit site.

How to optimize your faucet for better results

Last but not least I also learned that I need to optimize my faucet settings a bit. The main thing I did was to lower the timer on the faucet to 15 minutes instead of 45. The lower the timer is the more impressions and Time on Site you will receive. Here are the results: 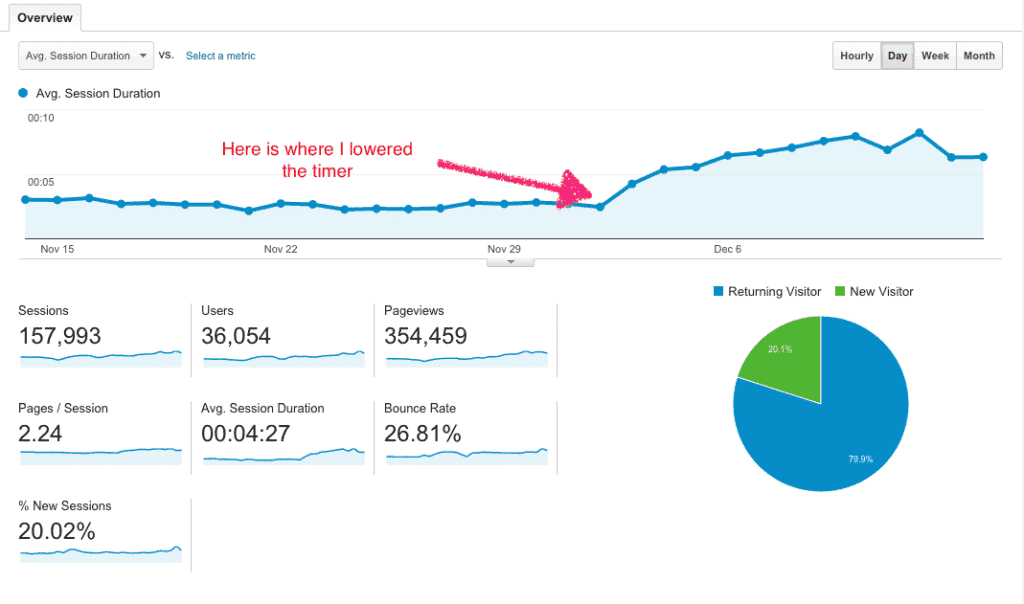 As you can see it created a huge difference in the Time on Site metric. It also affected the pagviews which probably got me earning more as well. Here’s how the pageviews grew over time:

How much did I actually make in the last 30 days?

Now to the part we’ve all been waiting for. Other than implementing Adsense I also signed up to Coinad. However I only put one Coinad ad at the moment as I don’t want to add to many variables to my tests. So for the purpose of this post I’m going to ignore Coinad’s revenue completely (they weren’t that much to begin with).

So looking on the past 30 days this is how much I spent on FaucetBox (payouts to users):

And here is how much I made from Adsense:

Why the hell am I losing money?!?

I guess you may be discouraged that after reading up to here you’re finding out that I’m actually losing money. Trust me, I hear ya 🙂

But like I said in the beginning, failure is a good thing. It makes you think, it forces you to become better. So here are my initial conclusions to why I’m at a loss:

So the main conclusion from this whole scenario was that up until now I was just guessing what I should pay my users. Now I have a proven answer of how much I can pay them. I already implemented these calculations into the faucet and hopefully we will see the results next month. I will also adjust these calculations each time the Bitcoin exchange rate rises by more than $50.

“Why are you not driving more traffic to the site?”

The answer is because the site isn’t working yet. What I mean by that is that until I can prove on a smaller scale that I can make a profit from the site there’s no point in driving in more traffic. It would be just like pouring water into a leaky bucket.

So what’s next for Milli?

So that’s it for today, hope you enjoyed this update on my progress with Milli. If you have any questions, comments or anything you’d like to add let me know in the comment section below.