Skip to content
You are at: Home » Hardware Wallets » Ledger Nano S Plus Review

The Ledger Nano S Plus is the new-and-improved version of the Nano S, the previous most popular device on the market made by hardware wallet company, Ledger.

It boasts a sleeker design than the original Nano S device, along with larger memory and a bigger screen. The Nano S Plus supports up to 5,500 crypto assets including NFTs, and can also hold a significantly larger number of blockchain apps than the older model.

Ledger is a hardware wallet company that was launched in 2014 by eight founding members. Ever since then, it has been one of the two most popular hardware wallet producers in the industry – the other being the well-renowned TREZOR.

Ledger has become a leader in security and infrastructure solutions for crypto and blockchain applications, currently having a team of more than 300 employees across the world. Since its founding, Ledger has sold more than 3 million hardware wallets globally.

In the Ledger Nano S Plus box, you’ll find the Nano S Plus hardware wallet device, a USB-C to USB-A connector cable to plug it into a computer, seed phrase recovery sheets, and a nifty little keychain strap. 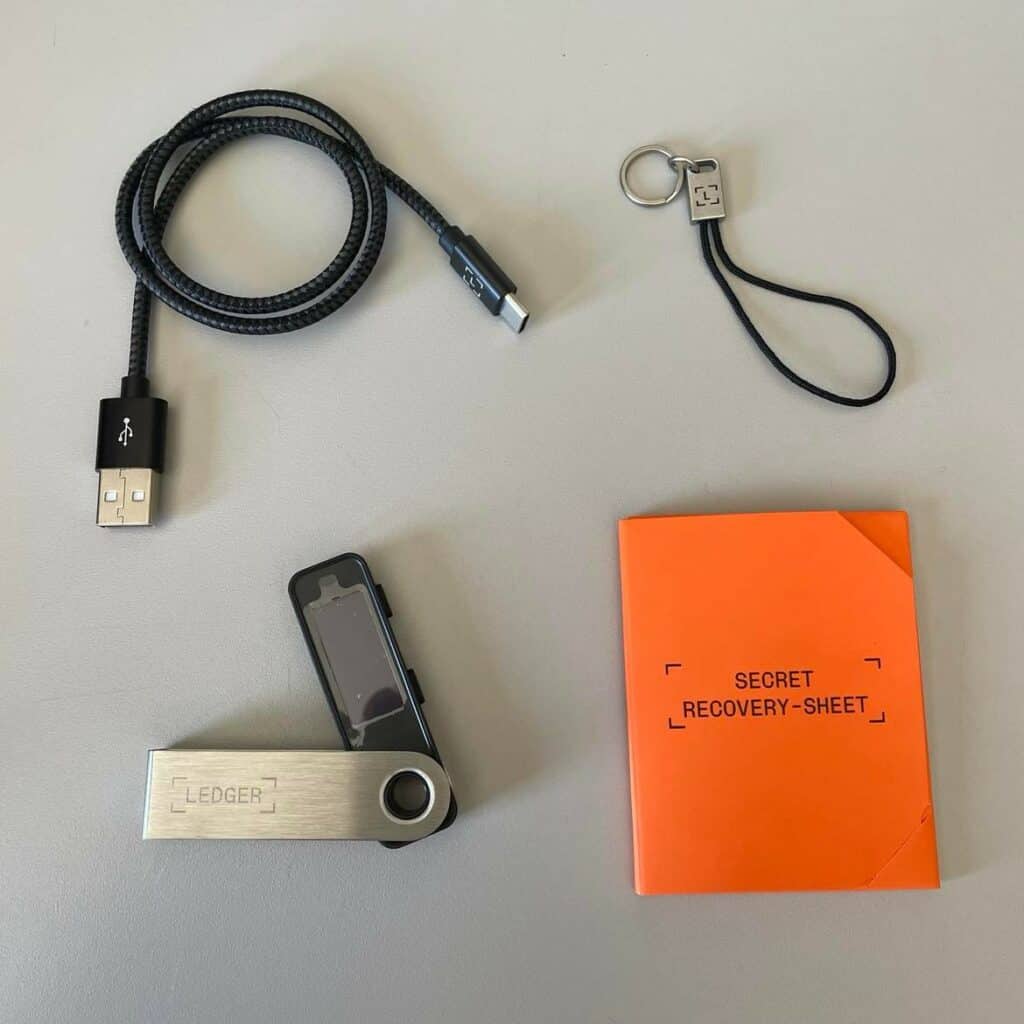 It also contains a small leaflet to help you get started, as well as some cool little Ledger logo stickers. All items included feel like they are of quite good quality, which is nice.

The Ledger Nano S Plus supports over 5,500 different crypto assets, from several blockchains. This includes, but is not limited to:

The device also supports a huge variety of Ethereum-based tokens, including ERC-20 tokens and non-fungible tokens (NFTs) such as ERC-721 tokens.

4. How Do I Setup My Ledger Nano S Plus

The Nano S Plus is extremely simple to set-up, with the entire process being guided by the Ledger live app.

To begin, you simply visit the “get started” link displayed inside the box, and download the ledger live app for your computer. From there, the app will lead the way.

To begin, visit the “get started” url that is displayed inside the box. Click the orange “download” button and select the Windows, Mac or Linux Ledger Live app to download onto your computer.

Next, plug in your Ledger Nano S Plus device into your computer, using the USB cable provided. Unfortunately, my laptop only has USB-C inputs, so I had to use my own USB-C to USB-C cable.

Once plugged in, you will find instructions pop up on the Nano S Plus screen. Use the navigation buttons to follow the instructions to set up a pin number for your device.

Step 3: Back up your seed phrase

As with any hardware wallet, you will then need to back up your seed phrase. Write down the 24 words provided on your device on the seed phrase recovery sheets provided (inside the orange card).

The device will then ask you to confirm the seed phrase, to ensure you have recorded it correctly. This step is highly important – if anything happens to your hardware wallet, you’ll need the seed phrase to recover your funds.

Step 4: Install the manager app on the Nano S Plus

For this next step, you will need to install the Ledger manager app on the hardware wallet itself. Simply accept the installation prompt on the device and wait for it to load.

At this point, your Nano S Plus will be able to interact directly with the Ledger Live app on your computer. 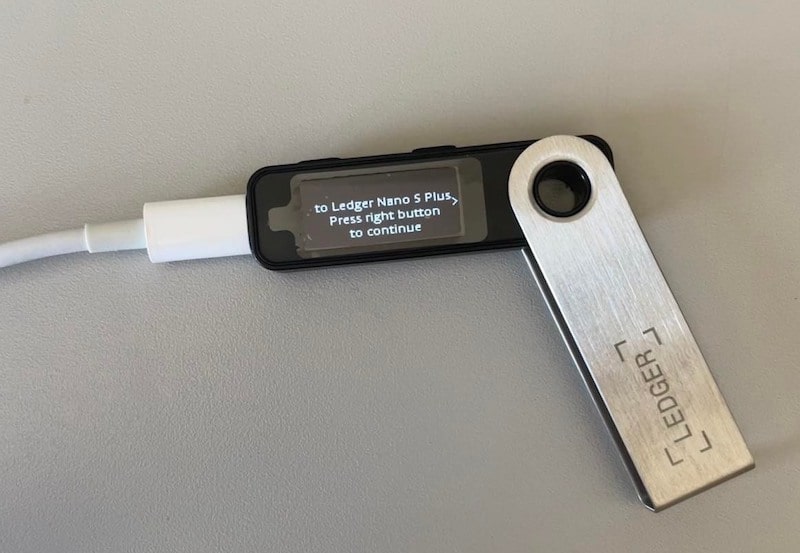 Finally, to send, receive and use assets on your device you will need to install the app for each blockchain, individually. Select the blockchain for the first asset you wish to use on your device, and approve the download using the Nano S Plus buttons.

After this, simply click the blockchain you wish to use and “add account”. This will create an address for that blockchain, to which you can send the appropriate assets.

The Nano S Plus was extremely nice and simple to use, with the entire setup process made very clear by the provided walkthrough.

The device is managed using two buttons on the device itself – which were very responsive and much easier to use than I expected. Although the seed phrase back-up process is a little tedious, it is necessary to ensure you have backed up your wallet properly.

The device itself is super compact, coming in quite a bit smaller than the original Nano S and the other popular Ledger wallet, the Nano X.

Due to additional memory size, the Nano S Plus is able to facilitate many more apps and assets at once than the original Nano S, which is handy for diversifying your portfolio. The larger screen and sleeker design also makes the setup process and general use that little bit more easy.

Unlike the Nano X, the Nano S Plus doesn’t have bluetooth functionality, so those of you who prefer the cable-free experience may still prefer the Nano X device.

One small inconvenience for myself was the fact that the device only came with a USB-C to USB-A cable – meaning it could not plug directly into my laptop (which only has USB-C inputs). This may be an issue for users with newer, compact laptops.

6. How Much Does the Ledger Nano S Plus Cost?

The Nano S Plus costs $79 directly from Ledger, which is only $20 more expensive than the original Nano S at the time of writing ($59). It is also much cheaper than the larger, bluetooth-enabled Nano X, which weighs in at $149.

This makes the Nano S Plus a very reasonable price for a new and improved device, which boasts most of the capabilities of its more expensive counterpart.

In comparison to competitor TREZOR’s devices, the Nano S Plus comes in more expensive than the TREZOR one ($74), but much cheaper than the more functional TREZOR T.

7. Which is Better? Nano S Plus or TREZOR One

The Nano S Plus has some stiff competition in the TREZOR One, which also has a very similar price point.

Let’s dive into the key differences and similarities between the two products, and if one is significantly better value for money.

Both of these hardware wallets are nimble in size, making them very easy to store or carry in your pocket. While both are made with durable plastic, the Nano S Plus has a metal casing component that makes it that little bit more durable.

Both the Nano S Plus and Trezor One support more than 1000 different assets.

Each of these wallets requires a couple of extra steps to add additional assets, however this is a bit more difficult to do with the Trezor One. Due to this hurdle, the Nano S Plus wins here thanks to its ease-of-use.

For most major assets, both of the wallets come with intuitive software and a simple setup process. This means that each option is simple to use for beginners and advanced users, alike.

Both devices have screens and buttons that function similarly, making them almost identical for usability and basic security.

Ledger and TREZOR have both been around since 2014, with open-source code for their apps and a great track record. TREZOR may stand out a little further, with a slightly stronger and mature community.

It is also worth noting that Ledger experienced a data breach in 2020, which revealed the email addresses and personal details of a significant number of its customers. Although the leak had no impact on user assets, the affected customers became a target for phishing emails and other scams.

The wallets are almost identical in price, making them a very interesting matchup indeed. At $79, the Ledger Nano S Plus is only a few dollars more expensive than the $74 TREZOR One.

Each of the wallets has a very similar set of features and usability, making this a tough one to decide! The Nano S plus edges out the win on overall design and ease-of-use, while the TREZOR takes the cake in terms of company and community reputation.

Personally, I would choose the Nano S Plus due to its ease-of-use for adding a wide range of assets, without much extra effort.

8. Conclusion – Is the Nano S Plus Worth It?

The Ledger Nano S Plus hardware wallet improves greatly upon the original Nano S model, at only a slightly higher price. The additional storage, larger screen size and sleek design place the device almost head-to-head with the more expensive Nano X model – at only a fraction of the price.

Given all of the above, the Nano S Plus is definitely worth the money, providing a brand new product at old device prices. Along with its user-friendliness and Ledger’s well-established reputation, beginners and advanced users alike would be more than happy with their purchase. 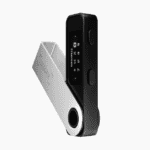 Get the Nano S Plus