What is Dogecoin – A Beginner’s Guide

A unique combination between cryptocurrency and memes, Dogecoin has become one of the world’s most popular and well-known altcoins.

This article explains what Dogecoin is, some of its history and what led it to being recognized by such a wide audience today.

What is Dogecoin Summary

Dogecoin (DOGE) is a popular cryptocurrency closely related to Litecoin, which is best-known for its “Doge” meme mascot and light-hearted community. Dogecoin has a vibrant community and is known for being associated with Billionaire entrepreneur, Elon Musk. It can be mined simultaneously with Litecoin and using the same hardware, since both are mined with the same algorithm, Scrypt.

That’s Dogecoin in a nutshell. If you want a more detailed explanation of Dogecoin, keep on reading, here’s what I’ll cover:

Dogecoin began as a spin-off of Litecoin in December 2013 by software engineers Billy Markus and Jackson Palmer. The coin was created with the intention of reaching a wider audience than Bitcoin and other cryptocurrencies, which had a more serious nature.

The coin’s name and theme were inspired by the “Doge” meme, a comedic internet sensation featuring a famous picture of a Shiba Inu dog. 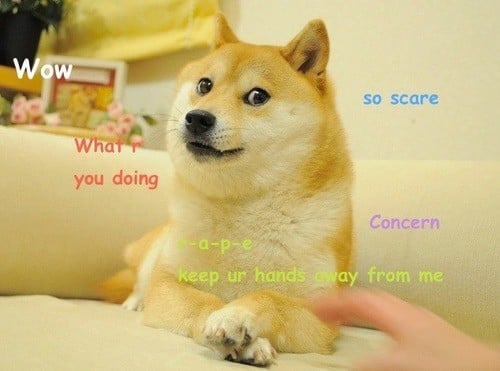 Due to this, Dogecoin has always been considered a “joke” or a “meme” coin with a more playful impression than its peers. Despite its light-hearted nature, Dogecoin has stood the test of time and remains one of the largest cryptocurrencies ranked by market cap today.

In its early days, Dogecoin gained traction via a tipping system called “DogeTipBot” that was used across social media platforms such as Reddit and Twitch. Users could donate DOGE to others simply by using a website’s comments section, to reward them for providing interesting or entertaining content.

Dogecoin is a Proof-of-Work cryptocurrency, using Litecoin’s Scrypt algorithm for mining. This enables Dogecoin to be merge-mined with Litecoin, allowing miners to mine both cryptocurrencies simultaneously using the same hardware. Dogecoin has a 1-minute block time, which is faster than both Litecoin (2.5 minutes) and Bitcoin (10 minutes).

Dogecoin public addresses are similar to Litecoin addresses, but begin with “D” instead of an ‘L’. Here’s an example:

Does DOGE Have a Maximum Supply?

Dogecoin was originally intended to have a maximum supply of 100 billion coins, however this limit was removed in early 2014 to allow for inflation of 5 billion DOGE per year.

Currently, there is no maximum cap on the DOGE supply. It is, however, increasing at a decreasing rate, which currently equates to less than 4% inflation per year and will continue to fall in percentage terms.

Dogecoin and its community have been involved in a series of charitable fundraisers throughout its history, mostly during 2014. Some of these include a fundraiser for the Jamaican bobsled team, and a DOGE fundraiser of $30,000 to build two water wells in a Kenyan village, in collaboration with Charity:Water in support of World Water Day.

Dogecoin’s mainstream attention began to accelerate strongly in early 2021, through the infamous r/wallstreetbets subreddit. Investors from the sub-forum were looking to collaborate on the next big “investment”, following the infamous Gamestop stock short-squeeze.

“DOGE to $1” became the goal of the movement, which was assisted by Dogecoin’s easy access through platforms such as Robinhood. These didn’t require any cryptocurrency knowledge or expertise to invest in the coin, making it easy for newcomers to get involved.

This would spark the beginning of the rally to all-time highs later in the year, which peaked at more than $0.73 per DOGE – equating to a market cap of over $93 billion – and minting new millionaires along the way.

Another notable part of Dogecoin’s more recent history has been the cryptocurrency’s relationship with Tesla founder and CEO, Elon Musk. Musk first showed interest in DOGE in April 2019, tweeting that Dogecoin was “pretty cool” – a response to a poll from the official Dogecoin account, which jokingly voted for him to become the cryptocurrency’s “CEO”.

Since then, Musk has often jokingly mentioned Dogecoin on Twitter, including changing his bio to read “former CEO of Dogecoin” in December 2020. An overlap of Musk’s Dogecoin tweets with the r/wallstreetbets-fuelled rally appeared to snowball into global interest in the cryptocurrency, which peaked on May 9th, 2021 – the very same day that Elon Musk hosted an episode of the American TV show Saturday Night Live which mentioned Dogecoin.

3. Is DOGE a good investment?

At the end of the day, DOGE is a light-hearted joke cryptocurrency, which was never designed to be treated with complete seriousness as an investment. Adding to that, it’s also notorious for being one of the most volatile cryptocurrencies around, with significant rises and falls in price throughout its time on exchanges. Due to that, there’s no clear answer to the above.

If you do decide, however, to “jump on the DOGE roller-coaster”, make sure you stick to the golden rule and never invest more than you can afford to lose.

Dogecoin is a well-established cryptocurrency that has remained popular thanks to its light-hearted nature and vibrant community. Throughout its history, it has been involved in a series of good causes including online tipping, charity fundraisers and has even received support from one of the world’s richest men, Elon Musk.

Although Dogecoin has risen to the forefront of the cryptocurrency markets, it is highly advised that potential buyers take it with a grain of salt as an investment – after all, it was only ever intended to be a meme.

That’s it! If you have any questions or would like to share your own experience with Dogecoin, let me know in the comments section below.