Skip to content
You are at: Home » Reviews & Comparisons » Exchanges » BitShares Review: Is This Decentralized Exchange a Game Changer?

BitShares (BTS) is an open source financial platform and decentralized exchange on the blockchain. Launched in July 2014, it seeks to remove much of the risk involved with centralized exchanges. Over the years, we’ve seen the high-profile hacks of exchanges such as Bitgrail, Bitstamp, and—of course—Mt. Gox. Such incidents have resulted in many users losing their funds due to their trusting those funds in the hands of a third party. A decentralized system such as BitShares cannot be as easily compromised because the data is not stored in only one central location.

The concept of BitShares was first thought up by Daniel Larmier, the cofounder and CTO of Steemit and EOS. He initially worked on the project with Charles Hoskinson, co-founder of Ethereum and Cardano. Larimer felt that mining was flawed due to the network centralization that followed and because of the unfair entry requirements for miners as a result. This led him to come up with a new consensus algorithm called Delegated Proof of Stake (DPoS), which he implemented in the BitShares platform, providing it with greater speed, efficiency, and flexibility.

Signing up for a BitShares account is quick and easy. Users aren’t asked to provide vast amounts of personal information in order to register for an account and trade on the platform. This stands in stark contrast to centralized exchanges, which must obtain such information in order to comply with government regulations. BitShares states that the platform is more resistant to failure thanks to this decentralization. Users are in control of their own security rather than having to rely on a third party such as a centralized exchange.

Aside from security, one of the main advantages of trading on BitShares is that it takes away some of the volatility of the cryptocurrency market with the use of SmartCoins. This is where one of the main differences between BitShares and Bitcoin lies. BitShares isn’t aiming to be a peer-to-peer currency. Instead, it aims to be an exchange system with value tokens that are tied to real-life assets.

Users of BitShares are able to stabilize their investments by converting to stable cryptocurrency assets that are pegged to fiat currencies. Because there’s no need to convert to fiat currency at any time, users have greater anonymity as a result. BitShares has its own token of the same name. Converting BitShares (BTS) to BitUSD works much like converting to USD except there’s no need to leave the security of the blockchain. 1 BitUSD will always equal 1 USD. As such, users are protected from the volatility of the cryptocurrency market since fiat currencies are much more stable than newer digital currencies.

One particularly impressive feature of BitShares is its scalability and ability to process transactions. In 2015, BitShares became based on Graphene, an open source blockchain implementation that acts as a consensus mechanism. Graphene is used by several other projects, including Steemit, and is said to be capable of 100,000 transactions per second. It’s well worth mentioning that this is more transactions per second than Visa and Mastercard combined. 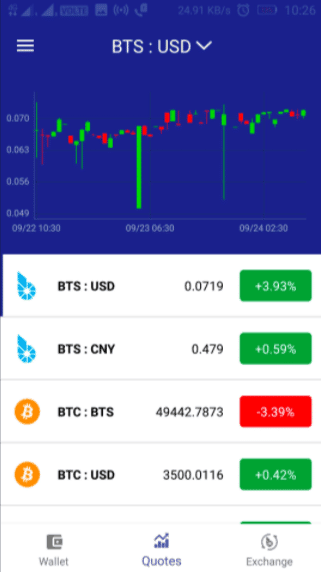 BitShares also offers a multicurrency wallet, which is available for web, desktop, and mobile (Android). The Android version seems to have some minor bugs based on reviews in Google Play, but all of the official wallet versions work well enough for the most part, with no significant issues to report.

One of the key ideas behind BitShares is that it’s available to anyone, anywhere, regardless of their location. As such, BitShares is understood to be available in all countries at present. As for currencies, BitShares allows for the trading of almost anything, including gold, silver, gas, oil, national currencies, and cryptocurrencies.

One of the biggest advantages of a decentralized exchange such as BitShares is that when it comes to trading, there are no limits imposed on the user. Indeed, a user can trade any amount at any time and anywhere. While the vast majority of cryptocurrency exchanges have daily withdrawal limits and ask for a great deal of personal information and documentation, BitShares has no limits since no account approval is required.

Fees come in at just a few cents per trade with SmartCoin pairs, which makes it one of the cheapest exchanges available today. Every operation in the BitShares ecosystem is assigned an individual fee with fees subject to change. However, fees are defined only by shareholder approval, which means that there is the scope for them to be changed if holders of BitShares aren’t happy.

BitShares is still very much in its infancy, and as such, there isn’t a huge number of people who have fully experienced the platform and what it has to offer. There’s also little in the way of in-depth reviews. Overall, users tend to praise the transparency of the decentralized exchange but argue that it’s more complicated to use than centralized exchanges such as Binance and Coinbase. However, the fact that a person’s username is also his or her wallet address does provide an element of simplicity.

Decentralized exchanges provide a whole host of benefits, such as greater user privacy and lower fees. It’s hard not to argue that they’re the way forward. However, there are areas in which BitShares can improve. For example, it’s worth mentioning that the interface of BitShares isn’t the most user-friendly. Indeed, there are many advanced features that will likely prove confusing to newcomers and all-around beginners to cryptocurrency. For this reason, BitShares is currently best suited to more advanced users.

Have you used BitShares? What do you think of this decentralized exchange? Let us know in the comments below!

7 comments on “BitShares Review: Is This Decentralized Exchange a Game Changer?”