This is the Coin Brief weekly Bitcoin price report for the week of October 26-November 1, 2014. This week was one of steady bearish activity, as opposed to last week’s volatile Bitcoin price activity. Overall, the Bitcoin price fell by 6.05% this week. 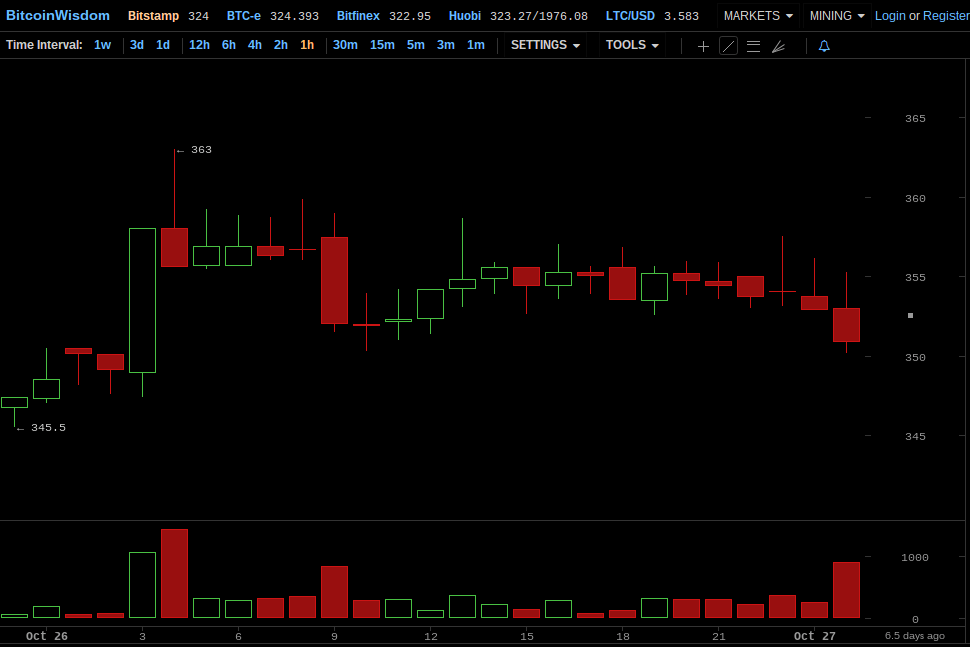 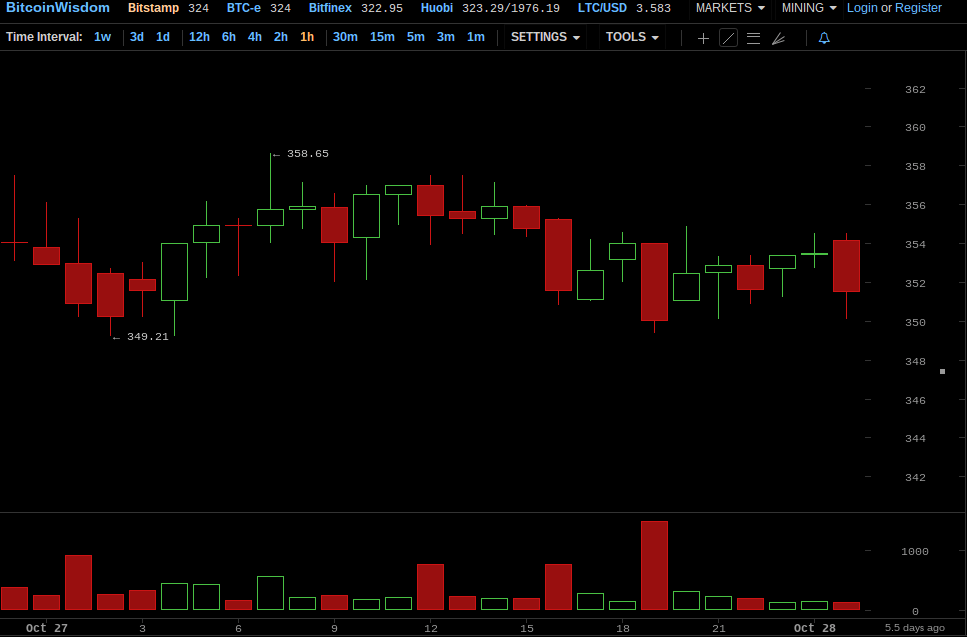 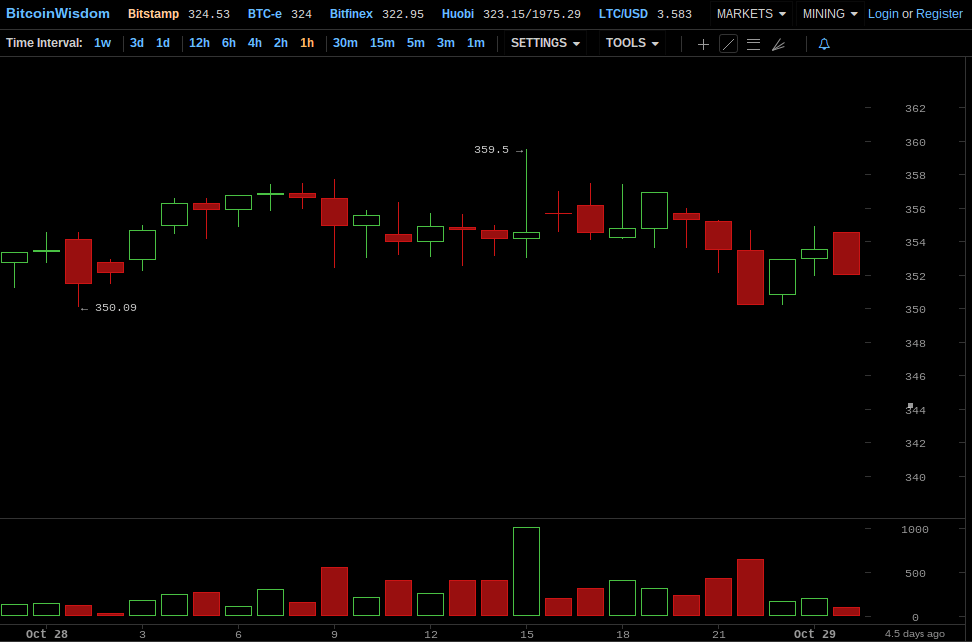 October 28 kicked off with the Bitcoin price at $353, a meager 0.28% decline from the opening price on the 27th. The 28th followed the pattern of flat Bitcoin price activity from the previous day, with the markets barely budging. The price remained in the $350s for the entire day, with a peak of $359.5 at some point during the 3 PM hour. The day ended at $353 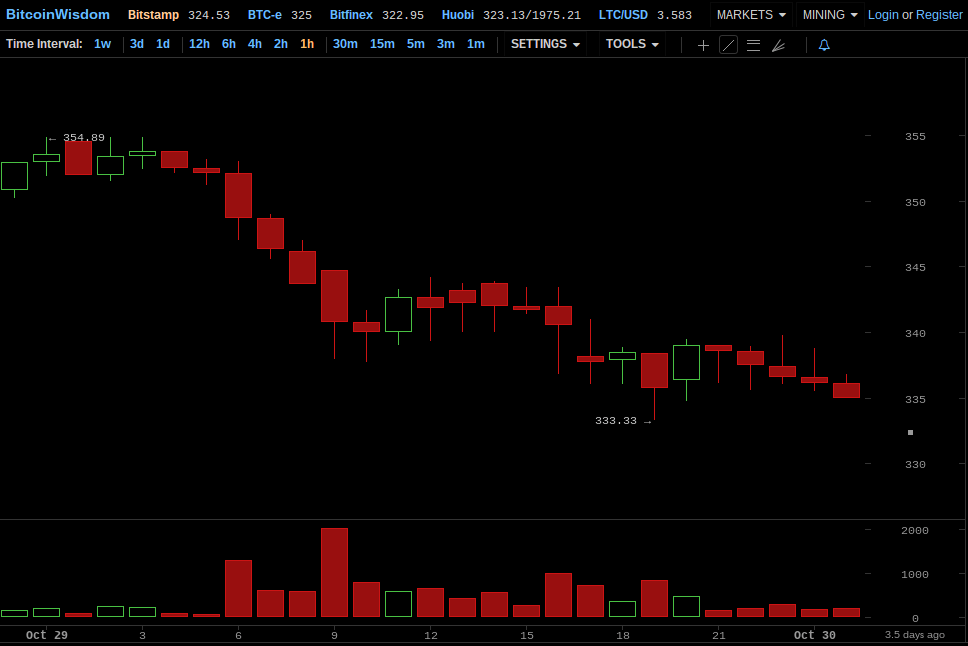 Breaking from the sideways action of the previous two days, October 29 was the first majorly bearish day of the week. The day opened at $353, a 0% change from the start of the previous day. Starting at 4 AM, the Bitcoin price embarked upon a relatively steep decline; by the bottom 10 AM, the price had hit $340. After a few hours of flat activity, the price dropped off into the mid-to-high $330s, where it stayed for the rest of the day. Wednesday, October 29, closed at $336. 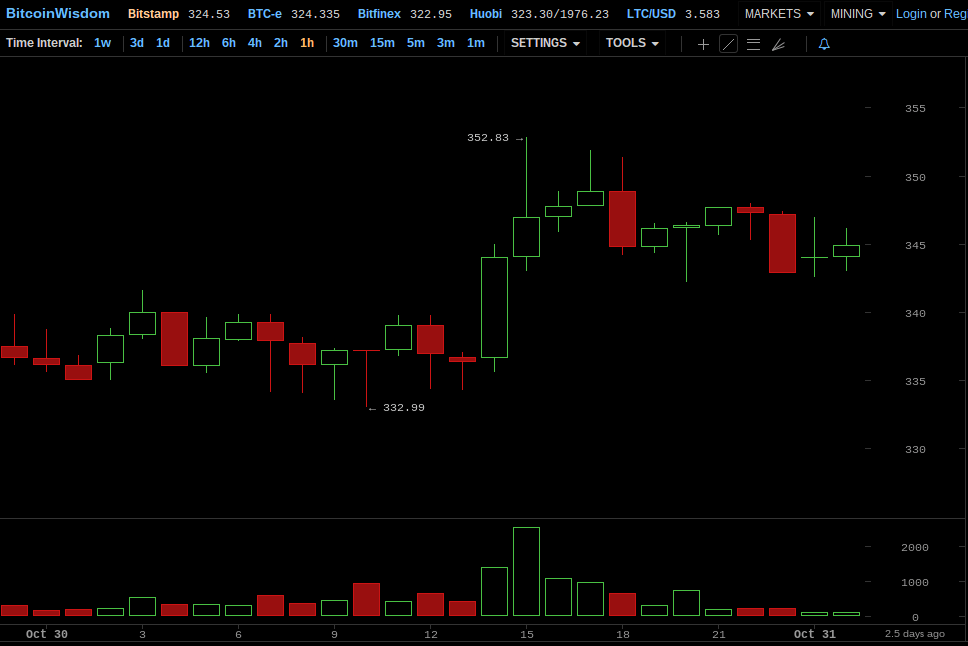 Thursday, October 30, began at $336 — a 4.82% decline over the opening price of the 29th. In the aftermath of the extremely bearish Bitcoin price activity on the previous day, the market stayed fairly flat during the first half of the 30th. Then, starting around 2 PM, the price attempted to rebound from the losses incurred on the 29th. The price jumped from $336 at the bottom of the 1 PM hour to $344 at the bottom of the 2 PM hour. The price continued gradually climbing for a couple of hours; this rebounding ascent peaked at $349 at the close of 5 PM, although the daily peak of $352.83 occurred at 3 PM. The Bitcoin price remained in the $340s for the rest of the day, closing out at $344. 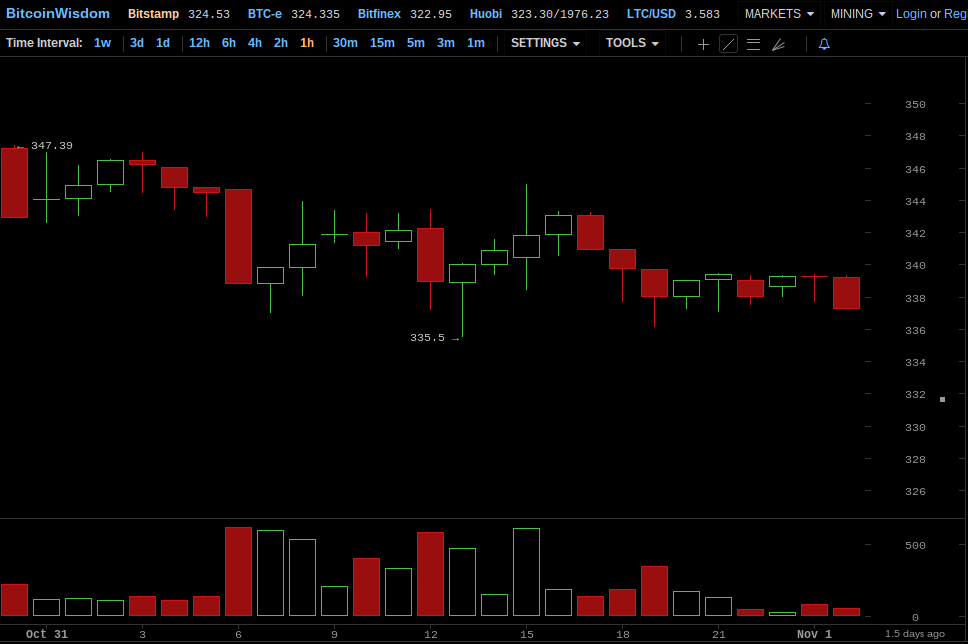 Halloween kicked off with the Bitcoin price at $344, up 2.38% from the previous day. Although the Bitcoin price activity on the 31st of October was subtle, it had a definite downward trajectory. At 6 AM, the price fell back into the high $330s. After two instances of increases and declines — one in the later morning hours and the other in the afternoon, the price leveled out in the high $330s. October 31 closed at $339. 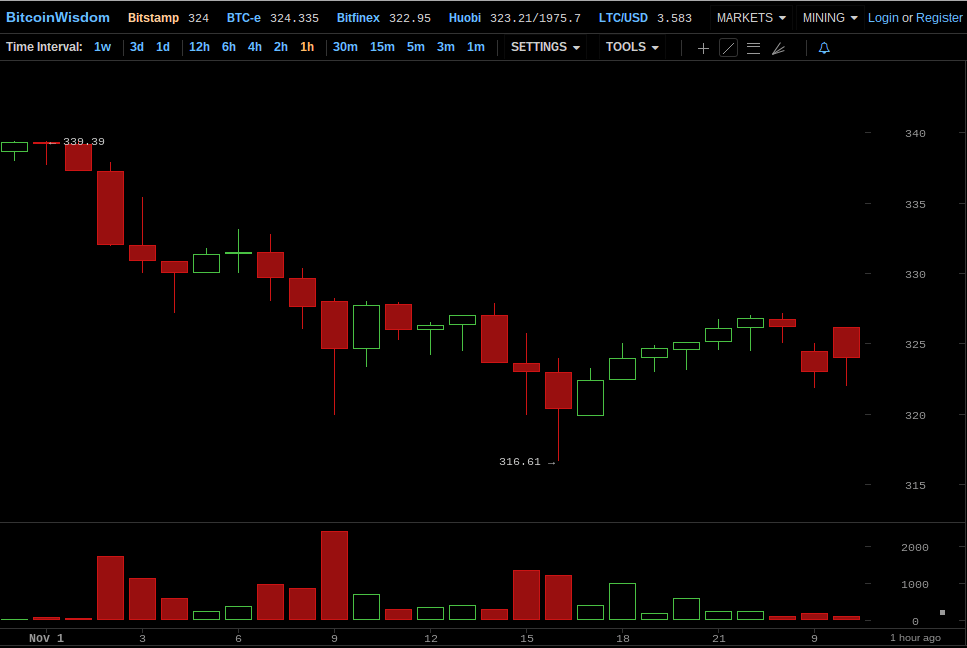 Saturday, November 1, started out at $339, down 1.45% from the opening price of the previous day. The day started out on the decline, with the previous day’s subtle downward momentum picking up considerable steam. At 2 AM, the price fell from $337 to $332. By the bottom of the 9 AM hour, the price had fallen to $325. By the close of 4 PM, the Bitcoin price had fallen to $320, with an hourly low of $316.61. The decline ended at that point though, and the price began a modest climb at 5 PM. This small climb continued for the rest of the day, and November 1 closed at $326 — a 3.83% decrease from the day’s opening price.

Last week, our forecast maintained that, ceteris paribus (all things remaining equal), the Bitcoin price would continue falling until it found a resting place — where it would await the next change in valuations. Our forecast was accurate, although it appears as if the price has not yet found that resting place nor has the market changed its negative valuation of Bitcoin.

Now, let us make our forecast of the Bitcoin price activity for the coming week. Considering the decidedly bearish activity of this week, with the price falling by a total of 6.05%, we will say that, ceteris paribus, the Bitcoin price will continue falling and will likely go below $320. The only things that would change the current trajectory would be a swift change in market valuations — which could either level the price out or send it upwards — or another wall being put up by a “Whale.”