Skip to content
You are at: Home » Reviews & Comparisons » Wallets » Ledger Wallet Reviewed by 80+ Reddit Users (No Promo Code)

About 2 months ago I did a comparison between TREZOR and the  Ledger Wallet. After using my ledger for a while I thought I’d seek out other online reviews by Bitcoiners who also own a device. I went through several Reddit posts and BitcoinTalk threads, here’s what I found..

Reddit users seem to give a lot of love to Ledger

First up was actually a tweet by Overstock CEO Patrick Byrne who is known to be a Bitcoin evangelist. Apparently you can get Ledger not only through the company website but also on Overstock and Amazon but the price will be a bit higher. Commenters on this thread say pretty much the same things said in the comparison – Ledger is an awesome product that lack’s the screen protection which TREZOR provides.

Having said that the CEO of Ledger commented on the comparison post stating:

Our next product will add NFC/BLE (bluetooth) compatibility, and feature an embedded screen/keyboard, with a credit card size form factor. We’ll then achieve maximum security with total usage ubiquity (first prototypes will be presented at MWC Barcelona this March).

Next I found a post about Bitcoin Magazine’s review of Ledger.  Opinions were basically split but one user caught my attention since he is basically the only one to own both TREZOR and Ledger at the same time. He says:

I have used Mycelium. I own three Trezors and three HW1 and two ledger wallet nano. After a lot of experiments for my personal use I have chosen to go for Greenbits with ledger or HW1. In IMHO they are the more cost effective practical solution right now because I need to spend my bitcoins with my phone everywhere I am (of course normally I keep my ledger in safe). I prefer this solution to paper wallet/mycelium because I don’t want to deal with different size of paper wallets and to deal with change.

The Bitcoin Magazine article is also very positive about their experience with Ledger.

The lack of a second screen for Ledger is still an issue..

The most comprehensive thread about the two hardware wallets was just a simple question – TREZOR vs. Ledger, which do you prefer ?

Again debate arouse about the fact that TREZOR has a screen while Ledger can be paired with your smartphone in order to provide 2 factor authentication (available only for Android at the moment). This still doesn’t dismiss you from initializing the Ledger on a 100% safe computer (as far as I understand). The post goes on and on and gets very “techy” at some point. The general feel is that there is still no clear winner.

There are some concerns that are raised regarding the security Ledger can offer without a second screen like TREZOR but in my opinion these are relevant only in extreme cases. Here’s a short video by Ledger on how to install the device.

I can say from my own experience that Ledger is a great product. It’s affordable, well designed and it seems that most of the online community agrees that even though it’s not as secure as TREZOR it’s secure enough for their needs. Hopefully the new Ledgers will indeed feature a built in screen which will make them an even better product.

I’ve contacted Ledger regarding getting some promo codes for our readers but at the moment they are not supplying any, if anything changes I’ll be sure to update you. Make sure to subscribe to 99Bitcoins so you won’t miss any updates.

Do you own a Ledger Wallet ? If so, I’d love to hear your feedback about it as well in the comments section below.. 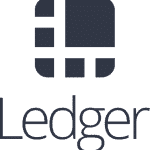