Skip to content
You are at: Home » Coinbrief » Coin Representatives » The Fundamentals of Dogecoin

Dogecoin has the highest market cap of any joke in human history, but why? What keeps Doge going, and what makes it a worthy investment?

Dogecoin is Second in Line

There’s no denying that Bitcoin is the first in line for companies and organizations looking to dip their toes in the cryptocurrency pool, but there are three important attributes of Dogecoin that ensure its widespread proliferation and make it the most attractive cryptocurrency for any party looking to reach new people:

Doge Has Had a Long, Sustained Period of Worthlessness

Dogecoin has had, with great consistency, the largest number of both active addresses and daily unique transactions, without even accounting for the massive volume of off-block-chain tips. This is a function of its value. Right now, Dogecoin is internet funny money, so people cling to theirs about as tightly as they cling to their “Likes” or retweets.

Dogecoin Has An Utter Lack of Political Ideology or Subtext

Bitcoin, being a decentralized, deflationary, and pseudonymous currency, naturally attracted a largely Libertarian user base from the start. Dogecoin, despite being every bit as decentralized and pseudonymous, reaches a much more diverse and plainly average audience. Here, Dogecoin benefits from being both being a following act (Bitcoin having already won the laissez-faire crowd’s devotion) and devoid of explicit political or economic purpose. Dogecoin serves most of the same economic functions of any other cryptocurrency, but those functions are not its cause. It’s not for any one group- it’s for everyone. Your kids, your parents, you.

The Dog. Yes, the Dog 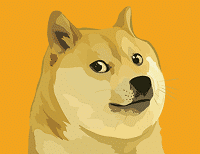 The Shiba Inu, the face of Dogecoin, does two things on a very personal level:

Dogecoin Has A Proactive Community

Anyone who has ever asked “What makes Dogecoin special?” has almost certainly had more than a few Dogecoin fanatics bluntly answer “The community.” They’re not wrong. Consequent to the items listed above, Dogecoin has fostered a larger, more passionate, and more devoted community than any other altcoin. It might seem like an inconsequential achievement, but Dogecoin’s community is one of action. It is always taking dramatic steps to promote Dogecoin and it constantly pushes for merchants and service providers to accept the currency as a payment method. The community, not satisfied with the number of ways to spend its Doge, organized its efforts to build and promote its own service economy. The community is a self-driving battering ram, looking for barriers to break down.

Dogecoin gets the lion’s share of altcoin-related press from the mainstream media, partly because the community frequently does newsworthy things, and partly because its own existence is a story in itself. Dogecoin’s absurdity and resilience get attention.

Doge Has Been The Face of Tipping for Quite a While

This is technically a benefit of Dogecoin’s mind share, but it is a particularly important one. Dogecoin is the cryptocurrency most inextricably linked to the idea of throwing money at people over the internet, largely thanks to the community which engages in tipping with great enthusiasm and regularity. The Chicago Sun-Times, after becoming the first major US newspaper to accept Bitcoin, is plowing even further into the crypto field. The Sun-Times Media Group’s plans include not just adopting Dogecoin as a payment method, but implementing Dogecoin tipping for its writers. Similarly, Twitch Interactive has been working for months to deeply integrate Dogecoin tipping into its streaming service. Nothing is stopping these groups from doing the same with any other cryptocurrency, but their selection indicates Dogecoin’s first-in-line status for organizations looking to implement tipping in their products/services.

The Nuts and Bolts of Dogecoin, the Cryptocurrency

Doge has exceptionally short block times and negligible transaction fees. Fast and cheap transactions are just what money needs, and their benefits to users need no explanation. But there’s also the nicety of Dogecoin’s massive supply. Dogecoin’s supply is such that any realistic level of success will still see the majority of transactions using whole numbers, as opposed to the nightmare of decimal places and zeroes that characterize the average Bitcoin transaction. These are small benefits, but they all further facilitate Doge’s use as currency proper.

Deflationary cryptocurrencies are designed to, once they are mined out, stop being a viable currency. In practice they are not currencies at all, but speculative investments. They exist to be hoarded and left to grow in value. Dogecoin, once it reaches its soft cap, will experience monetary inflation of five billion Doge per annum. Making sure that, once a currency’s potential value has been reached, a person’s holdings don’t necessarily increase in value gives people a reason to actually spend it, rather than just hoard it until the sun burns out. This is critical for a functioning currency.

Doge has A Glorious Cycle

The thing about all these items is that they feed each other. Nearly every attribute listed here is a consequence of another, and a catalyst for another still. The humor drives the community, and the community drives adoption. The low initial value drives tipping, and tipping grows the community. It’s a multifaceted cycle that has proven to be self-sustaining and unshakable in the face of rather dramatic price corrections and internal drama. Dogecoin was, entirely by accident, designed to endure.

I reckon this article deserves a Dogecoin tipping button 😀

It certainly deserves being updated with the new status of DogeCoin being merge-mined with LiteCoin. The Aux-PoW era of Dogecoin.