Skip to content
You are at: Home » Coinbrief » Where can I buy digital currencies? » Direct Purchase » Xapo's Disappointing Bitcoin Debit Card Rollout

The last few days have been rough for Xapo, a company that provides an online Bitcoin wallet service. They have recently administered a disappointing rollout of their Bitcoin debit card. The community has been in excited anticipation of Xapo’s Bitcion debit card for several months now. A few weeks ago, at the beginning of July, the company sent an email out to everyone who had signed up for the debit card. In this email, Xapo said that they would begin shipping out the cards by the end of the month. However, when the company began the rollout of their debit card last week, the reception was less than enthusiastic.

The Xapo Bitcoin debit card was advertised as the first, true Bitcoin debit card. Yes, there are several different cards that can be loaded with bitcoins, but they operate more like pre-paid credit cards. Xapo claimed that they would be bringing something different to the table; they announced a Bitcoin card that would work like an actual debit card. Users could create an online wallet with Xapo, which would serve as the person’s “bank account,” they could load their wallet up with bitcoins, and use the debit card just like you would with a fiat debit card. When a person used their Bitcoin debit card, either on a website or in a physical store, it would work just like a normal credit card transaction. As soon as the card was used, Xapo would check the Bitcoin wallet associated with the card to make sure it had sufficient funds, send the bitcoins to an exchange where they would immediately be converted into fiat currency, and then the fiat would be deposited into the business’ bank accounts. For the merchants, this transaction would be identical to a normal credit card transaction.

The Xapo card works on the existing infrastructure of a credit card company, which Xapo has painstakingly kept anonymous. Since the card uses a credit card infrastructure, the Bitcoin debit card users would be able to use their bitcoins to pay for goods and services at any business that accepted the major credit cards, regardless of whether or not they accepted bitcoin.

Xapo also promised their customers that their debit card would be available in all countries, which generated a lot of excitement in the Bitcoin community; a globally available Bitoin debit card would mark a historical event in the progression of the digital currency’s widespread acceptance and use.

However, things did not pan out exactly how Xapo promised they would. The actual rollout of the debit cards brought forth two major disappointments that turned company into the most hated Bitcoin business overnight. 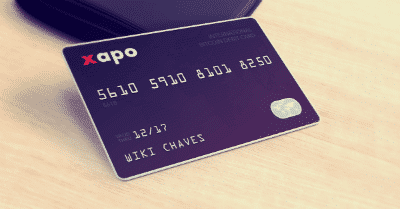 Despite the promise that the Xapo Bitcoin debit card would be available to all Bitcoin users in every country, the company disappointed the community by passively informing them that customers located in the United States of America would not be able to get a debit card. This exclusion came as a shock to many Americans who were excited to get their hands on the highly anticipated Bitcoin debit card.

What really frustrated the community the most about the US’s exclusion, however, was the fact that it was unannounced and unexpected. Xapo had been promising for months that their debit cards would be available world wide—not that they would be available worldwide, except for the United States. The company also made no effort to preemptively inform their customers of their inability to ship cards to the US; the American Bitcoin community found out that they would not have access to the Xapo card when they were in the process of placing their orders. Upon confirming their shipping addresses, American users were notified that the debit card would not be available in the US, due to financial regulations that prevented Xapo from shipping the cards.

Promising that there Would be None

But that is not how things turned out, unfortunately for the Bitcoin community. A day or two after the community learned that the Xapo card would not be available to customers based in the United States, the company updated its page about fees on the FAQ page of their website. They posted an image of a chart, which detailed the various fees that would be levied upon the users of the Bitcoin debit card. They were all of the same fees that are involved in using traditional debit and credit cards—in fact, the chart listed a fee that actually does not exist for most regular cards. This chart notified customers that they would have to pay a monthly fee just for having the card, regardless of whether or not they actually conducted any transactions with it.

One redditor even pointed out the blatant flip-flop on the part of Xapo by posting a screenshot of the FAQ page, where the chart was located, and juxtaposed it to a screenshot of a Wayback Machine page that showed Xapo’s FAQ page when it promised a fee-free debit card:

Xapo Responds to the Bitcoin Community

Due to these two, major disappointments, Xapo went from being a popular Bitcoin business, surrounded with hype for their debit card, to a hated company—almost overnight. The Bitcoin subreddit was filled with people accusing Xapo of pulling a “bait and switch” and comments from people who stated that they would be contacting the company, canceling their debit card orders, and removing all of their bitcoins from their Xapo wallets. Then, in an attempt to save face, Xapo reached out to the community and offered an explanation by publishing a statement on their official blog.

Xapo explained that the fee chart posted on their FAQ page contained fees that cannot be avoided when dealing with a credit card infrastructure. The company maintained that they would not actually be charging their customers any fees at all, outside of the $15 price of the card, including the much-hated monthly usage fee. Xapo then ensured the community that they would reimburse any fees that were unintentionally levied upon their Bitcoin debit card users.

The company also commented on their inability to ship their cards to the United States. They explained that standing financial laws in the US prevented them from shipping their Bitcoin debit card to US mailing addresses. They also notified customers that they would be unable to ship cards to India, due to restrictive financial regulations. Xapo then warned the community that other countries may lose access to the debit cards, depending on how the financial laws in those countries change over time.

The Importance of Bitcoin Debit Cards

The lackluster Bitcoin debit card rollout was very disappointing to the Bitcoin community because of the advancement that such a debit card signifies. A milestone for any new technology is when it reaches a stage where it becomes easy for any, average person to use. The Bitcoin debit card would bring that needed ease of use that would boost its mainstream adoption.

With the debit card, individuals could use bitcoin in place of fiat without really noticing any difference. Plus, as Bitcoin adoption grows, there would be a decreasing need for businesses to convert their bitcoins to fiat so that they can pay expenses. A debit card would spur the growth in adoption, thereby bringing the world closer to a state where Bitcoin can be used universally. If Bitcoin is easy to use, because it can be spent with a debit card, then more people would demand to be paid in bitcoins. Since many people have no currency except bitcoin, businesses would be forced, by their profit motives, to accept the digital currency, the suppliers of those businesses would have to accept bitcoin, and so forth, until Bitcoin becomes the monetary system of choice.