FREE BITCOIN CRASH COURSE
Enjoyed by over 100,000 students. One email a day, 7 Days in a row. Short and educational, guaranteed!
You are at: Home » News » Adoption » Bitcoin conquers Virgin Galactic: pay your trip to space with cryptocurrency 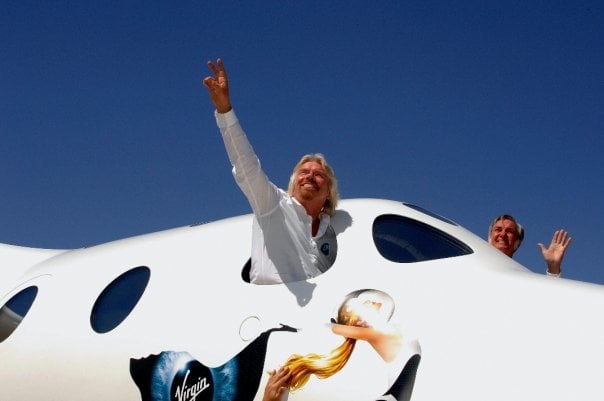 Virgin Galactic, the commercial space flight venture created by the billionaire entrepreneur Richard Branson, is accepting Bitcoin: this means the new crypto-millionaires and space aficionados can now use their digital coins to pay for an exciting and unique trip. The news was announced by Branson himself on CNBC’s show “Squawk Box”.

The entrepreneur awoke the community’s curiosity when he tweeted the following message, this Friday (22), before the interview.

According to the entrepreneur, Virgin Galactic already accepted its first purchase made with this “new exciting currency”, Branson said. The lucky space traveler is a flight attendant from Hawaii. Apparently, the woman made “quite a lot of money getting into Bitcoin early on”, he told CNBC.

The client bought the trip with Bitcoin and then Virgin Galactic converted the amount into US dollars, specifically $250,000. “There’s a fixed price [and]we can actually pay her money back, if she changes her mind about going to space in a few months”. 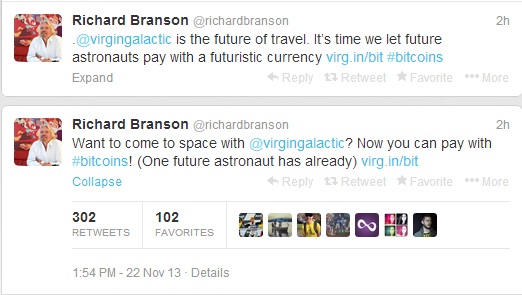 Actually, during the Skype talk with CNBC, the entrepreneur revealed he was also an early Bitcoin investor and is holding on for the long-term. “I have invested in some Bitcoins myself and find it fascinating how a whole new global currency has been created”, he wrote on Virgin’s website. Brason even compared the virtual coin with his own business. 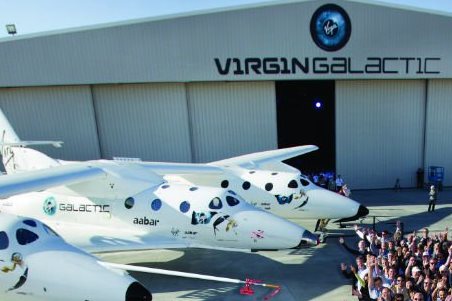 Virgin Galactic is a bold entrepreneurial technology. It’s driving a revolution. And Bitcoin is doing just the same when it comes to inventing a new currency.

I think the fact that there’s going to be a limited number of Bitcoins out there and it will ultimately be capped — unlike normal currencies where governments can print more currency — gives it a sense of security. There have been spikes and lows. But I think one day it will settle at a price that, I personally believe, is higher than the price today.

The entrepreneur also focuses regulation on Virgin’s website: “Bitcoins aren’t yet formally recognized by governments as a currency, but with some regulation I hope that it will become more widely accepted. A few years ago many people had doubts about whether Virgin Galactic would ever get off the ground. Now we have gone supersonic, are a long way along the testing process, and are looking forward to launching commercial space travel”.