Skip to content
You are at: Home » News » Andersen Throws Another Proposal to Increase Block Size Limit

For the past couple of months, Bitcoin community has been dealing with Gavin Andresen and his proposals for increasing block size limit on the Bitcoin network. And the Bitcoin Core developer is at it again with a new proposal. In his latest pitch, he has suggested a hard fork patch for Bitcoin XT. But so far, the community still remains skeptical over his plans to increase the limit of the block size.

How it all started

Most experts agree on the fact that Bitcoin network will not be able to process more than seven transactions per second without an increase of the block size limit, at some point. But The Bitcoin Core development team has yet to reach on the same page about the proper timing and approach to achieve this. When Andresen failed to convince them about the urgency of the situation, he decided to proceed through Bitcoin XT, a fork of the Bitcoin Core developed by Mike Hearn. Andresen expects to initiate bigger blocks on the network using this fork once Bitcoin XT surpasses Bitcoin Core. Bitcoin Core will be able to adopt bigger blocks, or turn out to be immaterial due to the compatibility of the two versions,according to Andresen. 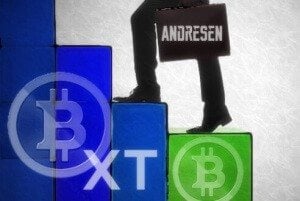 The debate began back in October last year when Andresen proposed Bitcoin Hard Fork to address network scalability. In reaction, some of the major members of Bitcoin’s technical community regarded Andresen as a “threat” to the community. Although his new proposal has gained some support from Bitcoin’s Reddit community, critics still remains unconvinced.

Lead developer of Bitcoin Core, Wladimir van der Laan strongly opposed against an autonomous hard fork. The compatible nature of Bitcoin Core and Bitcoin XT might result in a split of Bitcoin’s blockchain. It would create confusion among the users and they might end up losing money to double spending. Van der Laan feared that continuous use of a hard fork will frustrate the people on the losing side of the fork which might result in permanent shortfall of Bitcoin value.

Co-founder of Blockstream and inventor of hashcash Dr. Adam Back, is also among the group who opposed Andresen’s Bitcoin XT fork suggestion. He strongly recommended that the people who have the knowledge and expertise to maintain Bitcoin should avoid taking unnecessary risks of an autonomous hard fork.

Another criticizer of Andresen’s proposal, Peter Todd is well aware of the risk involve in hard fork and the probability of destroying Bitcoin in long term or causing substantial short-term harm to the network.

Overview of the New Proposal

Andresen’s proposal had several loopholes that paved the way for the community to criticize. Peter Todd mentioned that a proposal should include a complete and valid test result and details of the attributes of preserved Bitcoin and preservation process. It should also have a clear statement of security measures.

Adam Back criticized Andersen’s proposal over a fact that it is creating difference of opinion among the core developers. He thinks the best way for Bitcoin is to operate in a collaborative way rather trying to outsmart and overtake each other.

But the critics have not shut the door on Andresen yet. There’s still an open invitation for anyone with an idea to improve Bitcoin network. And with a combined effort, Bitcoin network will have better chance to survive which is the prime objective.