Skip to content
You are at: Home » Reviews & Comparisons » ICOs » What is Zen Protocol? November’s ICO Analysis

The following post reflects the author’s opinion alone, and does not constitute investment advice.

“Zen Protocol is a blockchain built for finance.” It’s a decentralized, peer-to-peer financial system, which contains a smart-contract platform that’s capable of creating, issuing, and trading digital assets. It runs alongside the Bitcoin network (a sort of opt-in sidechain), but has functions like smart contracts on the Ethereum platform. In a nutshell, it aims to take the best features of Bitcoin and Ethereum, in order to build a new financial platform.

Bitcoin is the gold standard for secure cryptocurrency, but it has issues with bandwidth and scaling. On the other hand, Ethereum has not been known to be the most secure place to store value as cryptocurrency. But it’s one of the easiest ways to create smart contracts.

Smart contracts are self-executing documents, which allow code to replace third-party intermediaries, such as brokers, banks, escrows, insurance companies, and financial advisers. Smart contracts can also greatly reduce counterparty risks by automating the terms of the agreement, prior to taking action.

By automating the process of these intermediaries, smart contracts reduce the manpower, costs, and friction associated with running the large amounts of data that these services process. Thus, the users of these platforms and services can now receive faster, cheaper service.

The current Bitcoin protocol uses a “one-time contract.” In other words, each transaction consumes the contract it uses. So it’s used to record the transfer of ownership of Bitcoin into an individual transaction. But it does not currently provide open-ended “smart contracts,” which continue to run self-executable code on the network.

On the other hand, Ethereum contracts are providing this code more frequently. In fact, Ethereum has open contracts that can run an infinite amount of times. But they run on “gas.” What does that mean?

In Ethereum, gas is somewhat similar to transaction fees in Bitcoin. Each operation on the Ethereum network requires a fixed amount of gas. (For example, adding two numbers costs 3 gas, calculating a hash costs 30 gas, and sending a transaction costs 21,000 gas).

Gas is paid in ether, but you can’t own it. It’s just calculated at a fixed gas/ether exchange rate, which you send as a transaction on the Ethereum blockchain.

If there is not enough gas to run the contract, then it fails, but whoever is trying to run it still owes money. Thus, it takes resources from both users and the network, even when it’s unsuccessful.

So there is an opportunity for a new protocol to improve or expand in both Bitcoin and Ethereum, which is something that the over a thousand altcoins are attempting to do. The question is: Can Zen Protocol make good on their claim to deliver something different than the two largest public blockchains?

Let’s take a look at how they make this claim through the lens of five important elements that make up a successful ICO:

Is it a nice-to-have or a must-have solution, with a very large and easily identifiable market? Is there competition?

Is there a real need for the new coin or token in the platform? Is it legally and beneficially structured.

Do they have the skills and experience to pull it off?

How well-defined are the team’s growth strategy and business development plan for scaling the network and finding a fit in the product market?

According to the Zen Protocol White Paper, Zen is “a blockchain to trade in any kind of financial asset with the same consensus on ownership and freedom from central control that Bitcoin provides for money. These assets connect to digital agreements with powerful, programmable abilities to process information and grant rights. Zen observes the Bitcoin network, and allows for assets backed with Bitcoin.”

Think of Zen replacing some of the services and functions that a financial advisor or broker might do for their clients. It greatly reduces counterparty risk, without the need for an intermediary. So while it’s is not the largest market, it is a well-defined, very profitable one.

The whitepaper goes on to say: “The Zen blockchain is designed to support real financial products, with powerful automation and freedom from control… Any blockchain which attempts both to create money and to provide smart contracts must limit one or the other.”

This challenge is one of the things that sets Zen apart, and it is being addressed by using the F* programming language, which was developed by Microsoft Research. It is a functional language that addresses formal verification.

The whitepaper continued: “Zen is a public blockchain secured by proof of work that has a scarce native token for contract activation.”

Zen provides direct ownership of digital assets, which represent promises that are enforceable. On the Zen network, smart contracts act as lockboxes, and tokens are their keys. Any digital asset, such as cryptocurrency, stock call, ETF, and corporate bonds, can be placed in the smart contract with the terms of the agreement —in exchange for the token.

The Zen protocol uses Oracles as a mechanism, which can prove the correctness of contracts. So on the Zen network:

So the Zen token supports tight integration with Bitcoin-backed assets. In other words, Zen contracts never cost the user resources, unless they successfully execute them. This feature is one of the ways Zen differentiates itself from other protocols, and it proves it can keep run costs down. They also integrate several trust-building methods in their protocol, such as Multihash mining proof-of-work, and atomic swaps or cross-chain swaps with other blockchains.

According to Zen’s website: “Zen contracts are paid to remain active for a set amount of time: after running out of payment, they are inactivated and left out of the mining pool, so resources are not a burden on miners or nodes. When reactivated, contracts appear with their original code, as if they were never deactivated.” 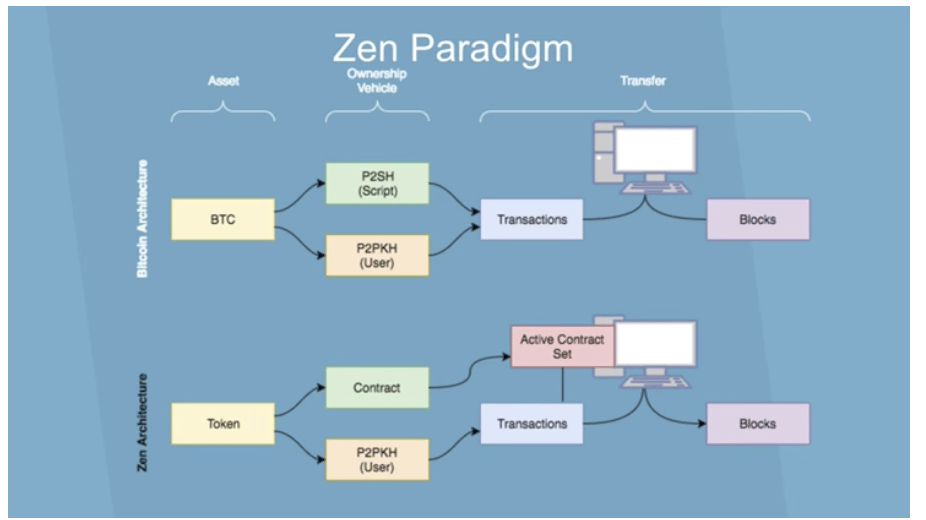 One of the benefits that Zen architecture has over Bitcoin’s architecture is that Bitcoin’s only asset is Bitcoin. Meanwhile, Zen can securitize any digital asset. Plus, Zen can hold assets off-chain until a function of the contract reactivates it. Thus, when it’s inactive, it doesn’t require resources from the network to continue to move it from block to block in the blockchain.

The key here is that there is a solid purpose for the Zen protocol, with plenty of technical documentation to support this. The Zen Protocol Alpha client is actually running. It demonstrates how their use of Oracles and Derivatives of these new Bitcoin-backed digital assets are utilized in Zen smart contracts.

It’s great that Zen has a whitepaper, a website, many blog articles, videos, and an active GitHub account. And that’s not to mention that they have an alpha version of their protocol currently running. So Zen is not just an idea or vaporware.

Having this much documentation does not make my job easy, but it does increase trust—when there seem to be no discrepancies in their claims or messaging. At one point, founder Adam Perlow stated, “We’re building a decentralized platform backed by a breakthrough protocol for creating, issuing, and trading digital assets.” With all this documentation and the code to support Zen’s progress, it’s easy to believe him.

The whole team is strong. A good variety of developers and engineers have experience in startups. They also have experience in crypto, finance, math, and physics. The only area I can see where they are a little lacking is marketing. They have put out some nice videos of them talking at events, but they need to do more than that if they want more people to know about them.

What about the Zen Token?

First of all it’s not designed to be a store of value or to compete with Bitcoin or any other crypto. As their website states “Zen is not another competitor to become digital cash. We believe that Zen is most valuable as a financial complement to Bitcoin.” Its function is to fuel the transactions on the Zen Protocol.

This schedule seems sensible to providing enough tokens to run the network, but also increases them as the network grows. The method of purchase involves using Bitcoin through their wallet. Some discounts are provided in the pre-sale, which is happening right now. The pre-sale discounts are as follows:

The pre-sale discounts will end when the total purchase amount reaches 3,000 Bitcoins.

The pre-sale is not a heavily discounted, so I don’t think investors will be flipping these tokens. I usually like to see a lockout period for large, heavily discounted investors, as well as for the founders. However, I’m not sure it’s necessary with this token. It’s structured to be stable, so we will not see large discounts in other ICOs, which will become targets for flipping or for pump-and-dump vehicles.

One last item to consider: Is there competition? Yes, in fact, it’s one of the largest ICOs in history. Back in June, Bancor Protocol raised over $153 Million in just 3 hours. And it offers a very similar solution.

Since this tech is needed to advance the financial industry, the platform can be applied to any digital asset, which seems to be a good future for Zen’s technology. With the utility of their token fueling their network and reward miners, it should be stable, as long as the platform and protocol remains in use. Overall, if you’re thinking of using the Zen Protocol platform, it seems like a promising ICO.