This post represents the author’s personal opinion, and it is not investment advice.

At first glance, I thought this review of the NAGA ICO was going to be fun. After all, I like researching and writing about ICOs, and this company has a ton of information about research to write about. In addition, the NAGA ICO website states that it is “the only token sale by an IPO’d FinTech, uniting the financial, crypto and gaming markets.”

Wait, what? An IPO’d FinTech company doing an ICO?

It seems that many people read that information, and think it could only be a good thing. It shows success, growth, and the ability to meet compliance regulations. But there are potential downsides. It could be a signal that the market they are in is not as profitable as it appears, or that all they care about is money.

I mean, why would a successful, profitable company risk being stigmatized as being money- hungry if they didn’t need the money? That could alienate their existing users and shareholders. Specifically, NAGA states on their website: “Investments and trading are ruled and governed by greedy banks and corporations that control access, operate non-transparently, and always take a cut of your money.”

Yet the two main investors in the NAGA Group AG are:

Yes, this ICO is indeed unusual, and it’s one that will require some in-depth analysis.

So why is a company that just had a successful IPO doing an ICO? In this unusual ICO review, I am going to attempt to answer this question, and address some of the inconsistencies I see in NAGA’s messaging. There are already a ton of general reviews on NAGA, which just ask the usual questions. So I thought this unique ICO deserved more serious consideration.

Before I get into NAGA, their many connected businesses, and their somewhat confusing messaging, I want to at least want give a high-level overview of their token economics.

Yes, that’s very high, and it’s pegged at $1 each. They say they will burn the ones that don’t sell. And right now, it looks like they might fall short of their target, which is $30,000,000. But they can still make it up in the final days.

In a Medium.com article by the NAGA executive team , they address the issue of why they have a 220M hard cap of tokens for sale. They list some good references, provide a spreadsheet, and encourage people to tweak the numbers and use their own assumptions:

The part that really starts to throw the token distribution numbers off is the possibility of only raising $30M, when they presold more than $15M with a discount. That’s a very big difference from their proposed 5% pre-sale amount.

Below is a breakdown of allocation and distribution of their token-sale proceeds. If you really believe time is of the essence and want to hurry to grab market share, this allocation makes sense—especially if they truly are close to having the software done. But if 50% of the tokens end up being purchased at a 30% bonus (plus another 5% given away for referrals), there is a chance that some may flip their tokens. 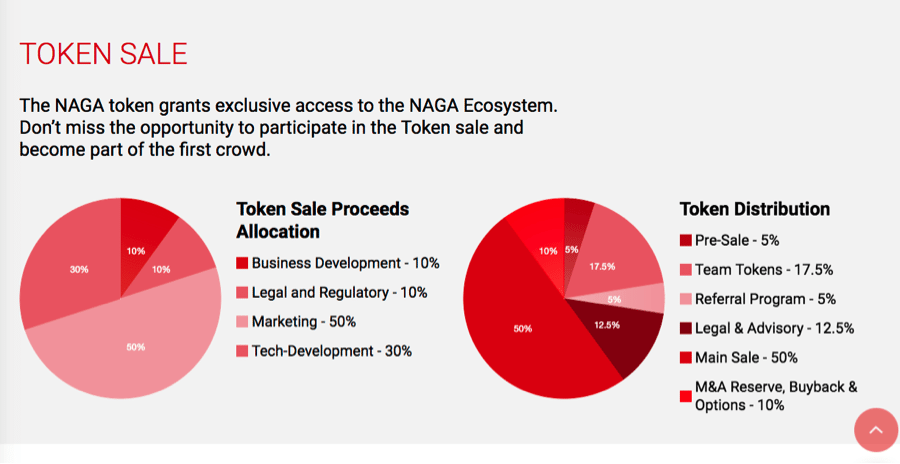 Based on the high hard cap and the $1 price, many people have shied away from this ICO. Even though I particularly like that they only gave a 30% discount, the high percentage of tokens acquired in the pre-sale from the bonus could be a concern in the short term.

What Value Is Provided in the NAGA ICO?

So what is NAGA? Well, it’s actually quite a few companies with different partners and investors. They also do not make determining this situation easy in their documentation, as they often refer to NAGA when they talk about any number of their companies, products, or services.

Sometimes, the documentation differentiates, but not always. If it didn’t matter, then why not make it clear? I understand they are doing an ICO roadshow and running a company. But they have between 120-170 employees, and they have already raised over $15MM. Plus, they are doing several hundred-thousand transactions per month (according to their whitepaper).

NAGA and the Firms and Services

NAGA Group AG and NAGA Development Association, Ltd., have partnered to introduce the NAGA Coin “NGC.” It’s a token that will serve as a unit of accounting in all existing and future projects of NAGA Group AG.

NGC allows discounted access to SwipeStox, the social network for financial traders. The only part of the platform is up and running, which is also why I saw problems when I first started researching this ICO. These issues mostly lie in this statement:

Then this statement immediately follows it:

One decentralized cryptocurrency for:

Benefit from the digital transformation of the largest industries in the world.

In my opinion, they should not have placed the statement “well, it’s already live” after the above description. Rather, they should have placed it after a description of SwipStox, the part of their platform that is live. Then I wouldn’t have had an issue with it. I made this point on their telegram chat channel, which seems to mislead readers.

They disagreed, and said that they encourage people to do their own research. Then if people look at the timeline, they will know which parts of the platform are built, and which are not. If you scroll down, you’ll find it about 11 screens below it. There is a “Roadmap” link in the menu, but I’m not sure most people see it.

Switex Gmbh is another JV with NAGA Group, which created the service Switex. They claim that they “will be the first legal market eco-system for virtual goods, which will enable gamers, game developers and publishers to profit fairly.”

In my opinion, this statement is another gross exaggeration. There are a number of other services that are already trading on major exchanges, and have agreements or partnerships with popular game producers. If you do not have the game producers on board, your platform has little chance of adoption.

Hanseatic Brokerhouse Securities AG is an introducing broker, which focuses on private investors and traders. They also provide training sessions.

The Ministry of Programming is a startup marketing and development firm that is “powering powerful startups in Europe.”

Together, these firms are using the funds collected from NAGA’s token sale to develop these services: 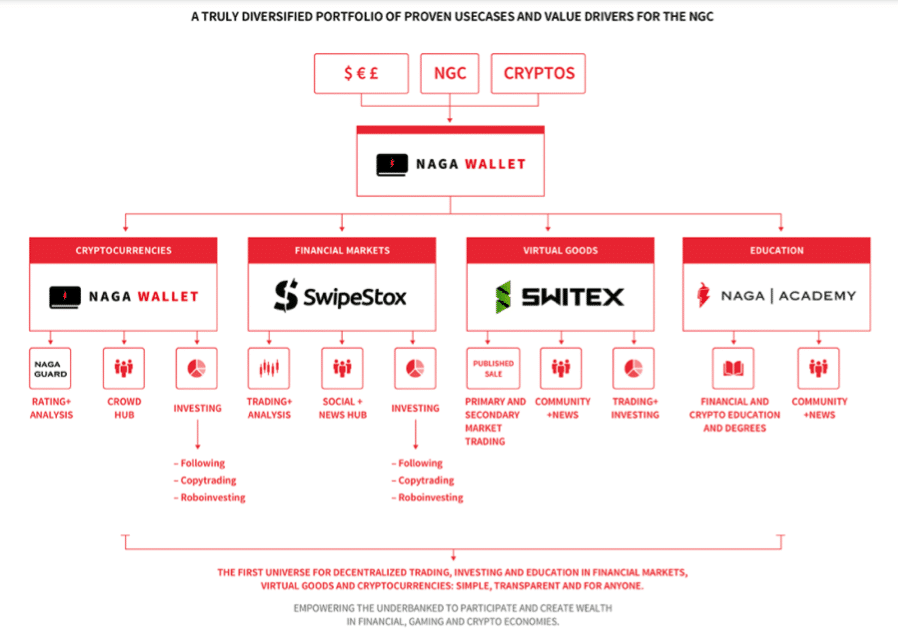 So the only product above that is currently built is SwipeStox. From looking at all the documentation, it seems like the NAGA Academy was added as an afterthought, because it is left out of some of the documentation.

In my mind, the NAGA Wallet is the platform, and it’s what the NGC is for. So the comments about it being already built—or about it being “the first crypto gaming exchange”—are distractions, which cause one to question the integrity of the messaging.

By monitoring the chatter on social media and the NAGA Telegram channel, it seems that few understand the contrast in rights between owners of stocks or shares in a company, and the owners of the tokens offered by a company. They are very, very different. For example, if a company is sold to another company, shareholders will get something, but token holders will not.

Trying to break the token value apart from the company (or companies) is not an easy task, especially when they are all so often referred to as NAGA. In addition, we are talking about a utility token, where the utility is the platform that grants access and discounts to a number of services. But when the value of that access and the services provided are not yet determined, it makes figuring out a value for such a token nearly impossible.

When I asked them about this situation on their telegram channel, they just posted a bunch of links to their website and online documentation, rather than simply explaining the value.  At first, I thought this tactic might involve avoidance, but now I think the person I asked just did not know the answer.

Here’s a simple equation I use to calcualte the value of a specific token:

In my opinion, the value of a platform-utility token is the value of the service or discount it provides. So as long as there are no exclusive rights to token holders, the value of the token should equal the discount being offered. In this case, it’s 50% on SwipeStox, which is the only part of the platform that is currently built. So if you trade on the German Stock exchange, it could be of value. As that is a good discount. They also offer some small rebates and other benefits. For instance, I received the one below after a few more days of asking questions.

So does the price of GDX have a chance of going up? Well, not as much as I first thought, since I misunderstood their messaging and claims. If the wallet and Switex were already built, they could grab a market share prior to the other virtual exchanges that are focusing on this one vertical move, rather than attempting to do as much as NAGA is.

According to their timeline, I might have some concerns regarding whether or not they would be able to deliver the wallet and Switex. However, considering their experience in building SwipeStox and the fact that they have a large team behind them, I’m more at ease.

Moreover, the design of that app won awards and has an appealing simplicity, which they will likely build into their other products. With the promise of additional offerings to holders of GDX (such as free education and a few other products), they have stated that there is a good future for the value of this token—especially as they build other services, and the demand for these services increases.

Finally, NAGA has some strong advisors, such as Roger Ver and Miko Matsumura, who are both well-known in the Blockchain community.

Conclusion: Would I Personally Invest in NAGA?

In spite of some messaging I found to be confusing and misleading, I am still really excited to see NAGA’s platform come to fruition. A well-designed, single, virtual wallet for financial markets, virtual goods, and cryptocurrencies could be very well-received.

So on one hand, we have mixed messaging and a high hard cap. But on the other hand, there’s a team that has already shown some huge success. Finally, there is a lot of hype around this platform and the token sale, so it definitely helps raise the token value.

For more information check out the official NAGA website.

*This ICO is not available in the markets in the US, China, and Singapore.

*This post is represents the author’s personal opinion, and is not investment advice.