Skip to content
You are at: Home » Reviews & Comparisons » Miners » The History of Bitcoin USB Bitcoin Miners

Note: USB Bitcoin miners (aka Stickminers) are not profitable ways to mine Bitcoin.

To quickly get up-to-speed on what Bitcoin Mining is all about, check out our introductory guide.

Here’s a brief summary of the history: Originally, Bitcoin mining was only performed on desktop or laptops. Remember the rule “one CPU, one vote”? But as Bitcoin grew in value, developers released a more efficient method called graphics processing unit (GPU) mining. GPU mining was followed by FPGAs, then ASIC miners.

In fact, when the Block Erupter Sapphire was released in May 2013, the very first ASIC miner appeared in the form of a USB miner: 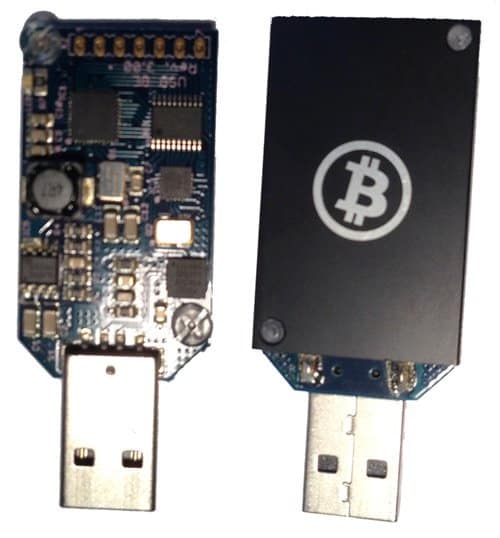 Mining Bitcoin with a USB Stick

Standard Bitcoin ASIC miners are shoebox-sized pieces of equipment, which consume more electricity than most desktop computers. Since such devices cram many mining chips (which span multiple circuit boards) into a single case, they end up being big, hot, noisy, and heavy.

Although economic efficiencies favor this design, Bitcoin miners don’t have to be built this way. Each USB Bitcoin Miner is about the size of a memory stick; this is proof that one or two mining chips (which are contained in a compact device) are all you need to mine cryptocurrency.

Bitcoin USB miners can also mine 13 other SHA-256 coins, including Bitcoin Cash, Peercoin, and Namecoin. You can view the full list on CoinWarz, which will also allow you to calculate the profitability of any USB miner’s hashrate for each coin.

The Pros of USB Miners

The Cons of USB Miners

Use Cases for USB Miners

Don’t expect big money—or even small money—from USB miners. This kind of profit is a thing of the past.

So USB miners are definitely not an economical choice for miners. You’re almost guaranteed to lose money running a USB miner, unless Bitcoin’s price really shoots to the moon. But even then, you’d make a lot more money by running regular mining hardware.

However, USB miners are fun, educational devices. They’re good ways to learn about the aspects of mining that involve software and hardware—or even electronics in general— without investing hundreds of dollars. USB miners can also be compelling tools for teaching others about these fields.

If you want to experiment with overclocking or underclocking ASIC miners, USB sticks are perfect. It’s better to blow up a $50 Stickminer than a full, $1000+ ASIC miner! Many experts recommend getting a USB hub for overclocking, which can supply enough power for USB miners.

A final use of USB miners is collecting them as Bitcoin memorabilia, a bit like physical Bitcoins. They can be interesting conversation pieces, especially for those with stories to tell about the early days of Bitcoin.

If you want to pick up an inexpensive USB miner for educational purposes, a second-hand Block Erupter Sapphire is available on eBay, and it’s a fair option. It hashes at 333 MH/s, and a new one sells on eBay for around $35. Second-hand ones will be about half the price.

Bitmain’s Antminer U1 USB reaches 1.6 GH/s. A new Antminer sells for $33, and a second-hand one sells for around $12.50. In terms of bang for the buck, it’s a slightly better option than the ancient Sapphire.

Are you looking for something that might earn more coin? Perhaps a small amount of SHA256 altcoin? Then we definitely recommend the GekkoScience 2Pac Stickminer. Just keep in mind that it won’t earn Bitcoin. 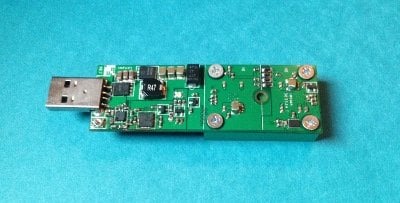 This miner contains two Bitmain BM1384 chips, which are the same chips used in the Antminer S5. The device mines at a maximum hashrate of 15 GH/s, which makes it the most powerful USB miner available.

Since the 2Pac is close to the cost of the Sapphire or U1, it offers the best value for the money, as well as the most power efficiency. So you really can’t go wrong. But to reach maximum mining speeds, you’ll have to manually tweak the device’s frequency and power.

Although this Stickminer contains Bitmain chips, it’s produced by GekkoScience, a hobbyist electronics company. The 2Pac is the successor to the GekkoScience Compac, which achieves a respectable hashrate of 8 GH/s.

You can buy the 2Pac from the recommended reseller, or perhaps other resellers in the official forum thread. It currently sells on the forum for a minimum of $32, plus $10 shipping within the US. In addition, you can find it on Amazon or eBay.

In forums, you can find further information or ask support questions. As these USB miners still enjoy a considerable amount of community support, they’re probably the best options for learning purposes. So in all likelihood, someone will be able to offer assistance if you get stuck.

2 comments on “The History of Bitcoin USB Bitcoin Miners”