Bitcoin Gold (BTG/Bgold) is an upcoming hard fork of the Bitcoin blockchain that’s scheduled to occur on October 25. Bgold has nothing to do with the yellow metal, so it shouldn’t be confused with BitGold, the gold investment and payments firm. Bgold is equally unrelatedf to both the previous hard fork, Bitcoin Cash (BCH/Bcash), which occurred on August 1, and the upcoming SegWit2x (S2X/Bizcoin) hard fork, which is scheduled for mid-November.

Bitcoin Gold will alter Bitcoin’s proof-of-work algorithm from SHA-256, which is currently dominated mostly by Chinese ASIC miners, to the Equihash algorithm. Equihash is also employed by the zCash (Classic), Zencash, and Hush cryptocurrencies. Equihash is mostly mined by graphics cards (GPUs).

According to the Bgold pitch, returning Bitcoin mining to home users will bring forth greater decentralization. However, massive Russian and Japanese Bitcoin mining operations have been planned for 2018, so it seems that Bitcoin’s mining centralization problem is slowly resolving itself.

The man behind Bgold, Jack Liao, is also the CEO of LightningASIC, a Hong Kong–based company that mines mostly Litecoin and produces cryptocurrency hardware. It’s surely no coincidence that LightningASIC produces a multi-GPU mining unit, of which it currently holds 913 units in stock. Should Bgold succeed in taking market share away from Bitcoin, LightningASIC would benefit greatly from both mining the new altcoin and selling miners for it.

Because the Bcash and Segwit2x forks are just as transparently motivated by financial self-interest, it’s hard to single out LightningASIC for its actions. Were Bitcoiners not compensated with free altcoins by these spin-off forks, the confusion and disruption they caused would be intolerable.

How to Safely Claim Bitcoin Gold

Any bitcoins (BTC) held in your Bitcoin wallet at the time the fork occurs will grant you an equal amount of BTG. This applies only if you have access to the private keys of your wallet, so no exchange wallets apply.

Although the fork will occur on October 25, exchanges are likely to only open Bgold for trading one week later on November 1. This allows time for technical issues to be resolved by all participants.

Right now, no clear instructions are available for how to split your BTC from your BTG. Exchanges and software/hardware wallets are still deciding on whether they’ll support this fork.

If you participated in the Bitcoin Cash split, the procedure will be similar—though likely smoother, as exchanges and wallets have had practice and more preparation time. As always, the most important thing to do is safeguard your Bitcoin private keys, as BTC’s value is far higher than BTG’s.

Warning: Beware of scammers who promise to give you BTG early if you share your Bitcoin private key with them. At least one such scam site is currently in operation. Sharing the private key of your Bitcoin wallet is sharing full control of any and all bitcoins therein. Beware!

When guessing at the future price of Bgold, the closest example to follow is Bcash. It’s reasonable to expect Bgold to see a far lower launch price than Bcash achieved. Bgold enjoys far less support from miners, companies, and what might be termed the “anti-Core community.”

My personal expectation is that Bgold will initially trade at ~10% of Bitcoin’s value at most, probably closer to 5%. I expect high volatility on November 1 when it launches on exchanges, followed by a sharp sell-off, subsequent pumps, and (depending on how Bgold develops) a steady decline. In other words, we’ll see a repeat of the Bcash pattern but at lower price levels. 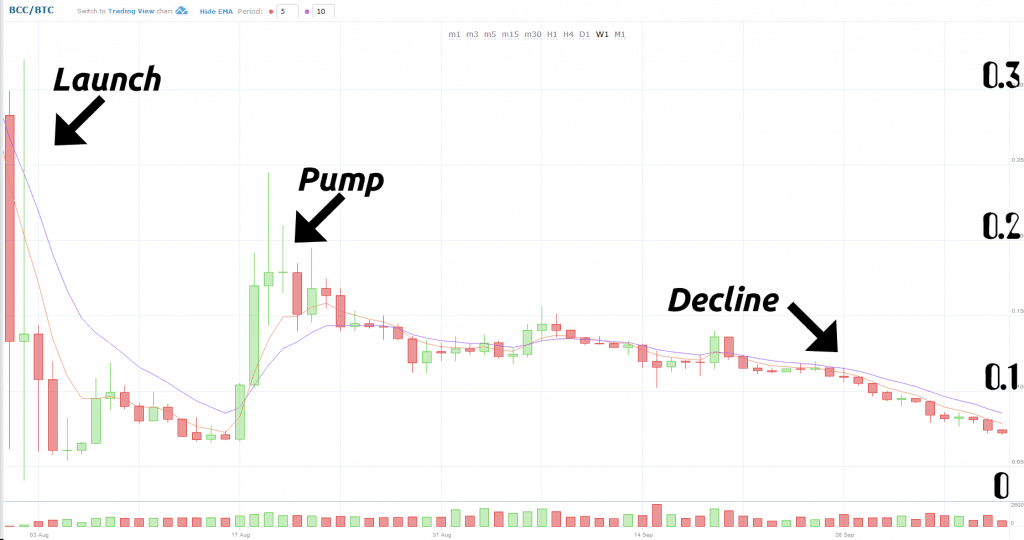 Bcash priced in Bitcoin on the HitBTC exchange, August 1 to October 9, 2017

Consider the technical differences among Bitcoin and the various pretenders to its crown: 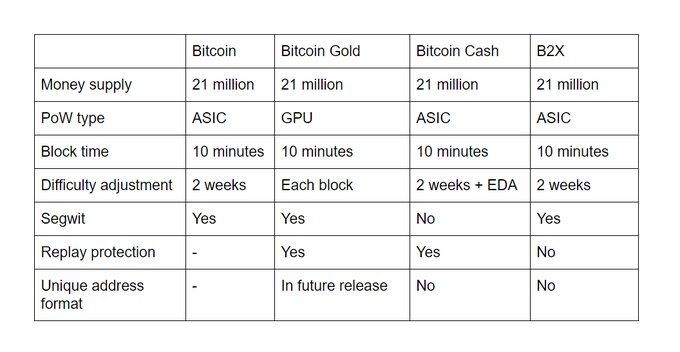 Whereas Bcash has deliberately rejected Bitcoin’s SegWit upgrade, Bgold has embraced it. Thus, Bgold may copy forthcoming Bitcoin improvements, such as Lightning Networks.

It appears that Bgold has plans to change address formatting too—a welcome change made to prevent the accidental sending of BTC to fork-coin addresses.

Further, Bcash’s Emergent Difficulty Algorithm (EDA) has produced erratic block times that are either too slow or too fast. Bgold’s per-block difficulty adjustment will likely encounter difficulties of its own.

These technical considerations lead me to believe that Bgold has a better chance at long-term sustainability than Bcash. Because of the additional attractive prospect of home mining Bitcoin, Bgold may eventually absorb much of Bcash’s value. However, as a mere clone, it seems doubtful that it’ll have much impact on Bitcoin itself.

Bgold was initially announced as an ICO, although these early announcements have since been (unsuccessfully) scrubbed from the internet. To put it mildly, it seems that the BTG plan has undergone multiple revisions.

Serious questions remain as to whether LightningASIC and its partners will be mining BTG between the fork and exchange listing dates. This kind of midstream pre-mine would send such strong scam signals that LightningASIC would be foolish to attempt it.

Another potential problem is that Bgold and SegWit2x haven’t yet implemented replay protection. Unless this feature is added, in sending BTG, a user might inadvertently send BTC also, which could be a costly mistake.

Warning: avoid trading BTG (and S2X) until replay protection is in place!

Another compelling reason to be bearish on Bgold is that there’s simply no real need for it. Were BTG to launch as just another Equihash coin without the benefit of Bitcoin’s name and transactional history, it’d go largely unnoticed. The only reason Bgold is interesting is that it’ll be freely distributed to Bitcoin holders. If the majority of Bitcoin holders are hostile to it, it’ll tank.

For further cautions regarding Bitcoin Gold, check out this Reddit thread. While the thread is probably too harsh, I agree that buying Bgold is risky and best avoided.

To my mind, the only question is how much Bgold to dump and when. Holding a small percentage (maybe 5%–25%) long term, as a gamble on future upside, doesn’t seem entirely unreasonable.

The following is my own personal take on Bgold and should not be considered as investment advice.

While I dumped all my Bcash as soon as possible, I’ll probably adopt a more patient strategy with Bgold. With Bcash, I had the advantage of being able to sell before most other market participants. This is unlikely to be the case with Bgold. I expect a big rush to sell when it goes live.

Unless Bgold sinks without a trace upon its launch, Bcash history suggests that it’s better to wait for a later pump to sell. If a futures market develops for BTG—similar to Bitfinex’s BT1 and BT2 tokens for Bitcoin and SegWit2x—it will greatly aid the decision on how much Bgold (if any) to sell when it launches. However, it seems like most exchanges are ignoring Bgold at this time, so a futures market probably won’t appear.

In Conclusion, Here Are 3 Things to Do to Survive Any Hard Fork:

What are your thoughts about Bitcoin Gold? I would love to hear them in the comment section below.