Skip to content
You are at: Home » Bitcoin Values » Senator Manchin Sent Letter To Congress Asking for Bitcoin Ban In US! 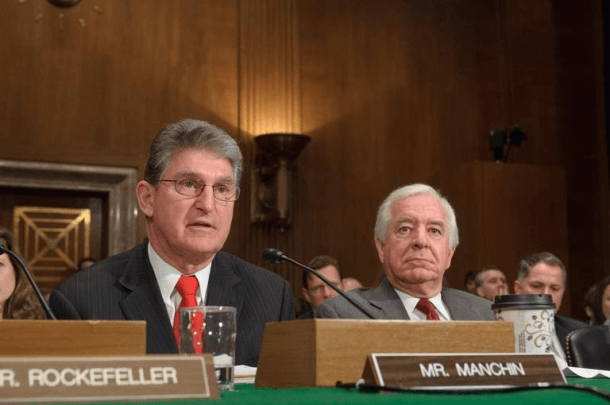 A number of government officials are calling for bitcoin ban from different part of the world. These officials are using Mt.Gox as evidence why bitcoins should be banned and not be use anywhere around the world as an alternative currency. What these morons are not realizing or care to research is that any other form of currencies have face some type of technical issues.

I don’t see any of them calling for the ban of the dollar after the movie “The Wolf of Wall Street” revealed the hole in our financial industry. No one called for the head of the greedy SEOs and Wall Street scam artists that have virtually bankrupted the United States’ economy. Yet, their calling for bitcoin ban worldwide.

A Democratic senator from the redneck state of West Virginia named Joe Manchin sent a letter to the United States’ Treasury Department, Federal Reserve, and other government officials claiming that the virtual currency is “illicit activity” and that bitcoin is “highly unstable and disruptive to our economy.”

ALSO READ: List of Countries That Have Banned Bitcoins

Manchin, an active member of the Senate banking committee, suggested in the letter titled “Manchin Demands Federal Regulators Bitcoin Ban” that Bitcoin should be banned in the United States because countries like Thailand, China, and South Korea have already enacted bitcoin ban restrictions, laws and policies.

The exact content of Machin letter calling for a bitcoin ban is below:

I write today to express my concerns about Bitcoin. This virtual currency is currently unregulated and has allowed users to participate in illicit activity, while also being highly unstable and disruptive to our economy. For the reasons outlined below, I urge regulators to take appropriate action to limit the abilities of this highly unstable currency.

By way of background, Bitcoin is a crypto-currency that has gained notoriety in recent months due to its rising exchange value and relation to illegal transactions. Each Bitcoin is defined by a public address and a private key, thus Bitcoin is not only a token of value but also a method for transferring that value. It also means that Bitcoin provides a unique digital fingerprint, which allows for anonymous and irreversible transactions.

The very features that make Bitcoin attractive to some also attract criminals who are able to disguise their actions from law enforcement. Due to Bitcoin’s anonymity, the virtual market has been extremely susceptible to hackers and scam artists stealing millions from Bitcoins users. Anonymity combined with Bitcoin’s ability to finalize transactions quickly, makes it very difficult, if not impossible, to reverse fraudulent transactions.

Bitcoin has also become a haven for individuals to buy black market items. Individuals are able to anonymously purchase items such as drugs and weapons illegally. I have already written to regulators once on the now-closed Silkroad, which operated for years in supplying drugs and other black market items to criminals, thanks in large part to the creation of Bitcoin.

That is why more than a handful of countries, and their banking systems, have cautioned against the use of Bitcoin. Indeed, it has been banned in two different countries–Thailand and China–and South Korea stated that it will not recognize Bitcoin as a legitimate currency. Several other countries, including the European Union, have issued warnings to Bitcoin users as their respective governments consider options for regulating or banning its use entirely. While it is disappointing that the world leader and epicenter of the banking industry will only follow suit instead of making policy, it is high time that the United States heed our allies’ warnings. I am most concerned that as Bitcoin is inevitably banned in other countries, Americans will be left holding the bag on a valueless currency.

Our foreign counterparts have already understood the wide range of problems even with Bitcoin’s legitimate uses – from its significant price fluctuations to its deflationary nature. Just last week, Bitcoin prices plunged after the currency’s major exchange, Mt. Gox, experienced technical issues. Two days ago, this exchange took its website down and is no longer even accessible. This was not a unique event; news of plummeting or skyrocketing Bitcoin prices is almost a weekly occurrence. In addition, its deflationary trends ensure that only speculators, such as so-called “Bitcoin miners,” will benefit from possessing the virtual currency. There is no doubt average American consumers stand to lose by transacting in Bitcoin. As of December 2013, the Consumer Price Index (CPI) shows 1.3% inflation, while a recent media report indicated Bitcoin CPI has 98% deflation. In other words, spending Bitcoin now will cost you many orders of wealth in the future. This flaw makes Bitcoin’s value to the U.S. economy suspect, if not outright detrimental.

The clear ends of Bitcoin for either transacting in illegal goods and services or speculative gambling make me weary of its use. The Senate Homeland Security and Governmental Affairs Committee issued a report just this month stating, “There is widespread concern about the Bitcoin system’s possible impact on national currencies, its potential for criminal misuse, and the implications of its use for taxation.” Before the U.S. gets too far behind the curve on this important topic, I urge the regulators to work together, act quickly, and prohibit this dangerous currency from harming hard-working Americans.

Should the United States regulate bitcoins or enact a bitcoin ban completely?