Skip to content
You are at: Home » News » Legal » Member of Board of Directors says Bitcoin Foundation is “effectively bankrupt”[UPDATED]

UPDATE, 8th April 2015 – The Bitcoin Foundation might be splitting into two different organizations, according to an internal document originally drafted a month ago by its management team. One of the organizations would continue the work of the foundation in order to promote Bitcoin, while the other one would focus on core development.

The Bitcoin Foundation is “effectively bankrupt.” The accusation was recently published on Reddit by Olivier Janssens, elected to the foundation’s Board of Directors last month.

The post published on Bitcoin’s sub-Reddit starts with a ‘note to the press’, which reads “the Bitcoin Foundation does not represent Bitcoin in any way. It has historically hired some Bitcoin developers, lobbyists and organized a conference.”

After a few weeks as a member of the foundation’s Board of Directors, Janssens felt he had to share his experience with the public.

“I was elected on a platform of transparency and decentralization of core development. Since the beginning, the Foundation has been sorely lacking any transparency of its actions. I can no longer in good conscience hide the truth on what I have witnessed in the Bitcoin Foundation since I was elected last month.”

Bitcoin millionaire Olivier Janssens, who was elected alongside Jim Harper, then moves on to explain that the foundation has funds at the moment. “First of all, the Bitcoin Foundation is effectively bankrupt. As a result of two years of ridiculous spending and poorly thought out decisions, they almost ran out of money in November of last year.” 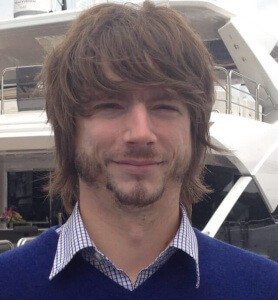 According to Janssens, the foundation tried to find a way out by selecting a new executive director, who will leave the organization in two weeks. At the time, Patrick Murck “decided that the only way to still get funds at that point, was to focus solely on funding core development, in the hope that people would see that as a good cause.”

However, “people were smart enough not to trust the Foundation anymore.” Janssens says the foundation wasn’t able to collect the necessary funds. “With the election in February-March, it became clear that people did not want the Foundation meddling with core development. The truth is that the Foundation’s plan was to hire even more core developers to start a Bitcoin Standards Body. No organization should have this much control over Bitcoin, and a disaster was avoided.“

The cryptocurrency entrepreneur adds that following the imminent bankruptcy, the foundation has “fired 90% of its people,” while some of the workers will stay on as volunteers.

Janssens goes back to tell an episode that happened when he first joined the foundation. During his first board meeting, Janssens and Jim Harper “immediately put forward a vote to have the board meeting recorded.”

“We followed Robert’s rules of orders, and everyone else basically shut us down and failed to follow procedures. […] It was critical for us to vote on a plan that would save the Foundation. When I mentioned that such a critical vote is all the more reason to make sure the whole meeting gets recorded, I was ignored.”

So what’s in store for the Bitcoin Foundation? According to Janssens, a special trust fund is being created to finance the work of the core developers. The Bitcoin millionaire has promised to donate $100,000 to secure the wages of some major names like Gavin Andresen and  Wladimir van der Laan for the next year. “The control of this trust fund will be handed over to the core developers, who can decide who can join it. Alternatively, we can give voting power to everyone who puts money in it (pro-rata). I will also organize crowdfunds and help make this fund public. At no point do I want to have any control whatsoever.”

Janssens is also encouraging the members of the foundation to speak up. “The bylaws allow for a special board meeting to be called by 15% of members. I would recommend you to do so and ask for all information to be released so you can learn the truth. Additionally I would recommend for you to replace the whole board if you want this organization to last. Alternatively you can vote to shut it down and get your money back. There might not be enough money left in the Foundation to pay its members back, but I will personally try to help make up the difference, even though I have not been part of it,” he wrote on Reddit.

The post currently available on Reddit was originally published on the Bitcoin Foundation’s official forum and the thread now includes replies from the foundation’s chief scientist Gaving Andresen, among others. The majority of people are supporting Janssens’ public complaint and asking for a board meeting. 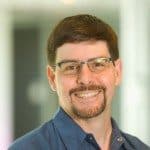 “The Foundation will support core development” vision didn’t work; I took a couple of weeks off from doing technical work to meet with people capable of funding that vision and it very quickly became clear most “deep pockets” don’t trust that the Foundation would stick to that vision, or aren’t willing to risk their reputations being closely associated with an organization that had two of its Board members resign in disgrace last year.

Unfortunately I’m pessimistic about a coherent vision arising– too many of the “squeaky wheels” here want to wallow in past mistakes. I expect what will happen is there will be lots of Monday-morning quarterbacking and discussion (“you lost how much money on the Amsterdam conference? Conferences should make money, how could you be so stupid?” … when all of the “yous”, and the money, are long gone).

And very little productive discussion of how to move forward. Please prove me wrong…

However, the Bitcoin Foundation’s current executive director is not happy with Janssens’ decision to go public. Replying to a tweet published by software engineer and Bitcoin entrepreneur Jeff Garzik, Patrick Murck said “when you have two board members openly working against efforts to sustain the organization might not be worth the effort.” 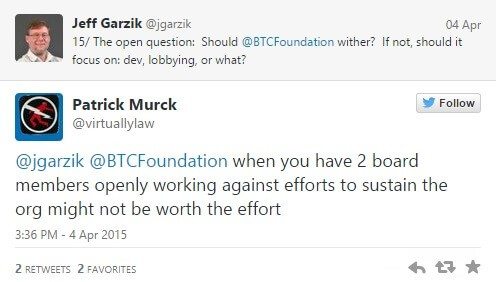 The first consequences of Janssens’ public outflow are now obvious. Greg Egan, responsible for the foundation’s Corporate Counsel & Operations section, announced his resignation on Saturday (4th). Janssen suspects he will be next in line. “If I get asked to leave the Foundation for telling the truth, so be it. The truth is being told.”