Although half the world is currently welcoming spring, the UK-based exchange Bit121 decided this was the best time to get some sleep. The Bitcoin platform has announced it is suspending all trading operations and temporarily closing down.

The decision is not permanent, according to the company. It is more similar to a “hibernation” process, Bit121 revealed in a statement published on its website: “we like to think we have simply gone into hibernation, and we fully intend to re-open at some point in the near future“.

We have learned a great deal and gained a lot of experience in our 4-5 months of running a Bitcoin exchange. It has been a challenging few months without a doubt but also a lot of fun. We would like to thank all our customers for your business, your support, your feedback and your understanding.

However, the exchange didn’t reveal when it would be back to business. The only date announced on their website is the day of the suspension, March 31st. 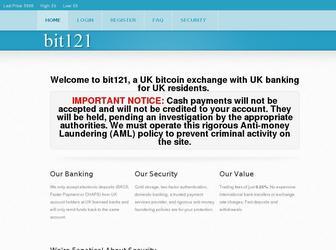 According to Bit121’s statement, most of the site’s functionality was removed on March 26th. Still, so far users have been able to view their account balance and account statement, withdraw any sterling balance greater than $50 without having to pay the usual fee and withdraw any Bitcoin balance available.

However, “users will no longer be able to deposit Bitcoins or trade. All open orders will be cancelled by bit121 administration”. The exchange also started carrying out withdrawals on every account with a positive GBP balance from March 27th.

In the meantime, the exchange revealed to Coindesk that it decided to close because it was taking too long to secure an alternative banking partner.