Skip to content
You are at: Home » Guides » Trading » Bitcoin volume

One important indicator in markets is the “volume” of assets being bought or sold. Simply put, volume refers to the number of stocks that are being bought and sold. When there is a large volume of Bitcoins being traded, that means that a lot of people are buying and selling. The deeper question is why are people buying and why are they selling? Are Bitcoin users selling their coins because prices have gotten very high and they believe that coins are over priced? Are Bitcoin users purchasing coins because they believe that the coins are currently undervalued? 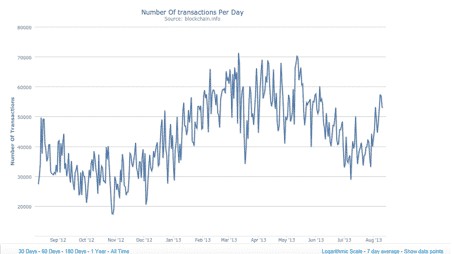 Currently Bitcoin prices are averaging over 50,000 trades per day. As you can see from the chart above, transactions tend to swing up and down by large amounts in a short period of time. This is normal for a financial instrument and goes to show how fickle trading can be. While you can glean useful information from trading volumes, make sure you don’t over over think volumes and read them too deeply. Current prices, news and other developments, and other things are better indicators.