This is the Coin Brief weekly Bitcoin price report for the week of September 21, 2014-September 27, 2014. This week was was fairly quiet; the price stayed between $390 and $410 all week, barring a huge, short-lived spike that came as the result of some major news. Overall, throughout the duration of the week, the price fell by 1.95%. 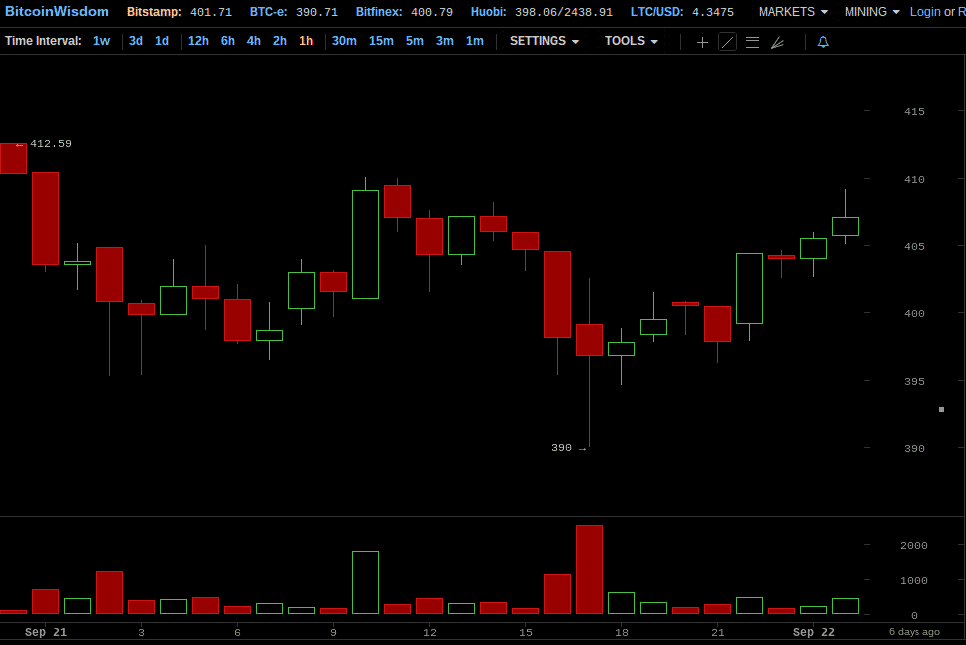 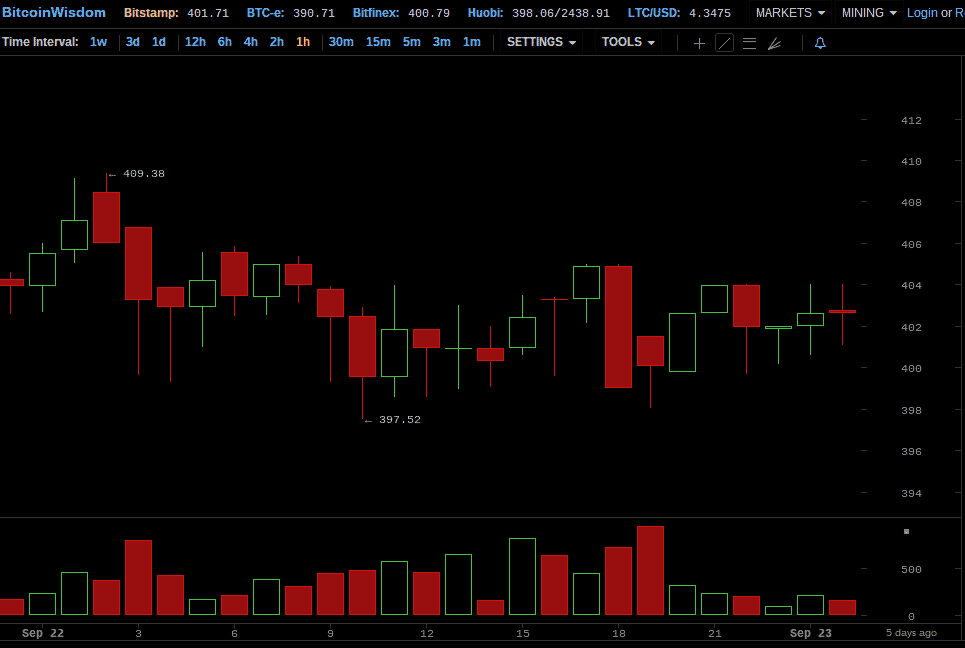 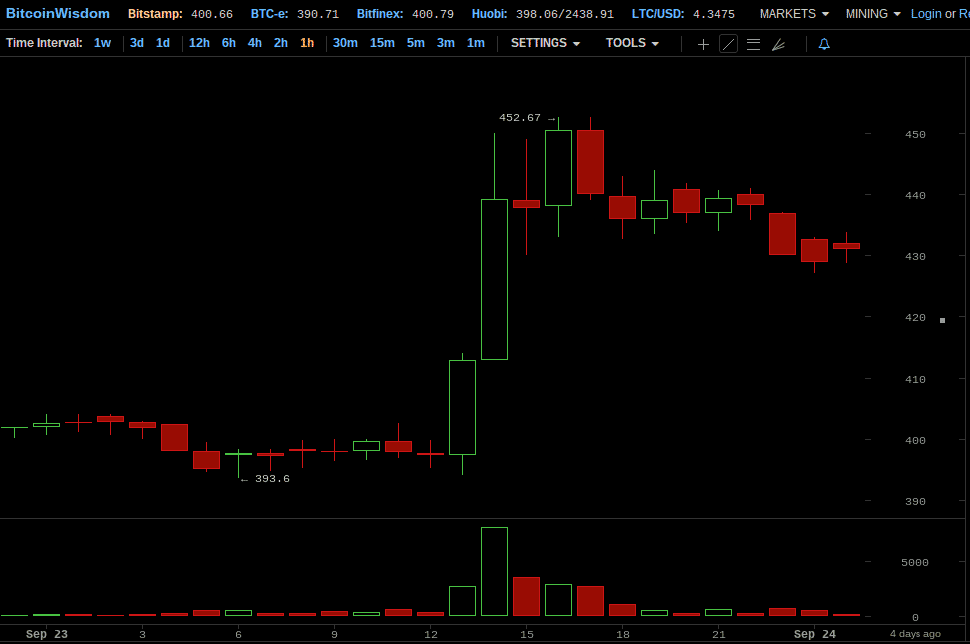 The 23rd opened at $402, down 0.50% from the start of the previous day. The first half of the day followed the pattern of the previous two days, fluctuating between the $390s and $400s. But then, starting at 1 PM, the Bitcoin price shot up. It was not a gradual or even steep climb, but rather was a vertical jump from $397 at the top of 1 PM to $450 at the bottom of 4 PM — a 13.35% increase within a 3 hour timespan. After this massive jump, the price went down slightly and leveled out, ending the day at $433. The substantial price spike that occurred at midday immediately followed a major announcement that Paypal would be integrating Bitcoin into its Paypal Payments Hub. We will cover the connection between this story and the price jump below. 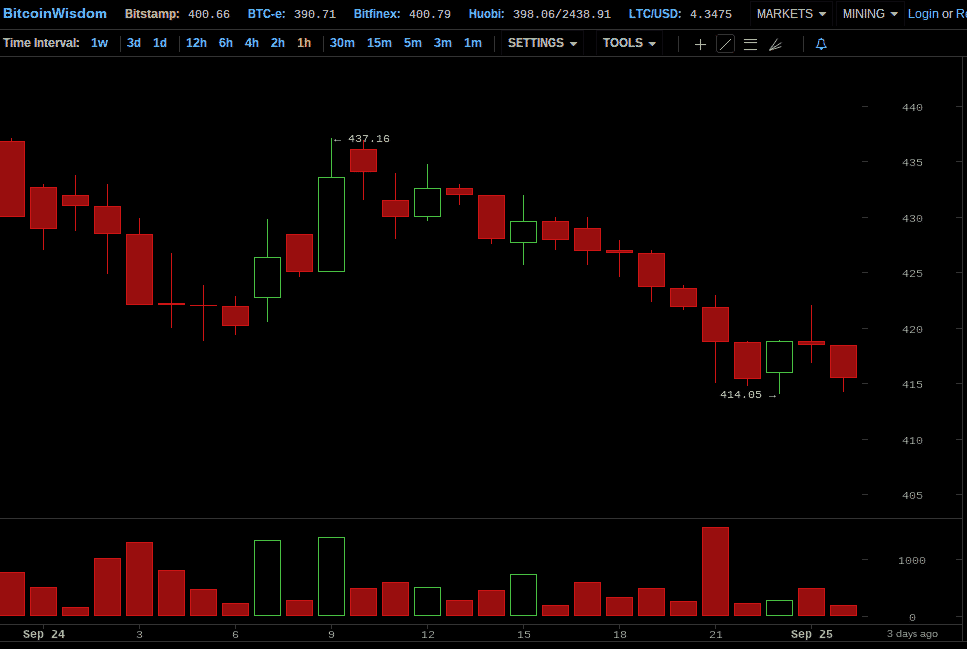 Wednesday started out at $433, a 7.71% increase from the open of the 23rd. On this day, we began to see the gains from the Tuesday Bitcoin price spike disappear, embarking on a return trajectory to the lower $400 range that persisted before the spike. By the close of 5 PM, the price had fallen to $428, and at the end of the day the price was down to $419. 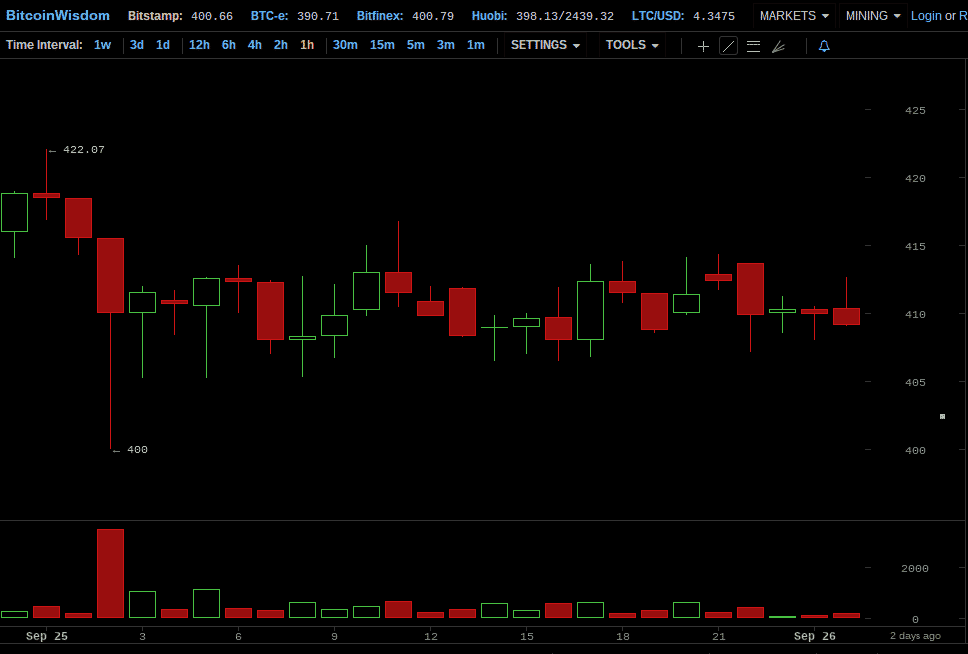 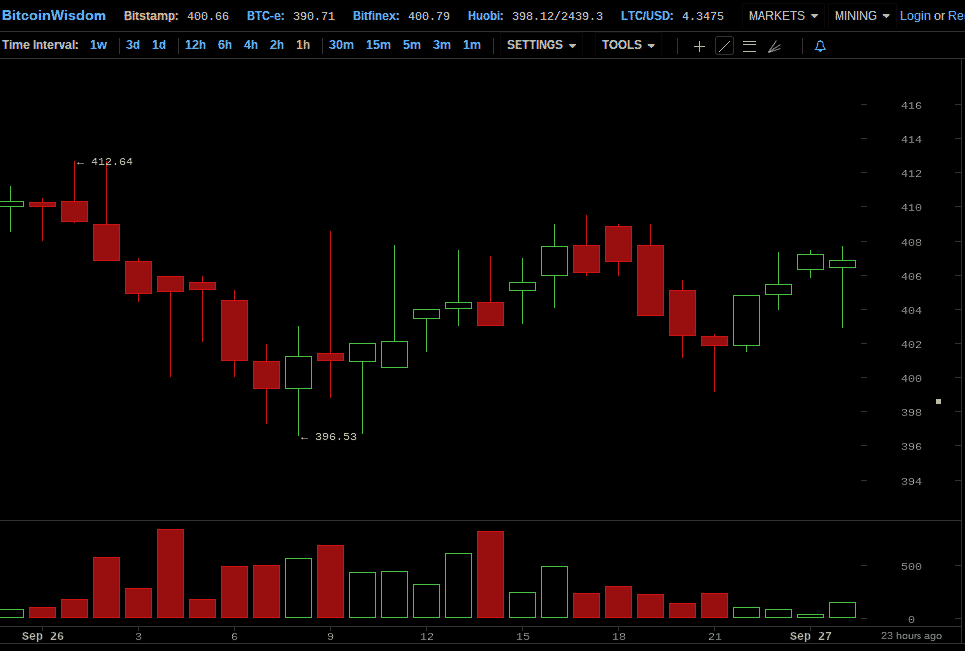 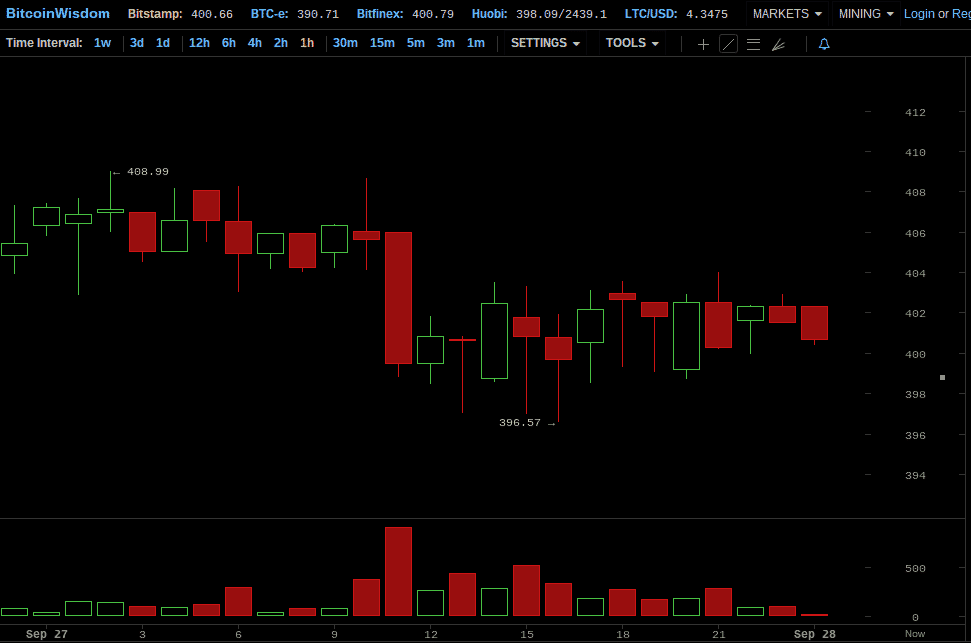 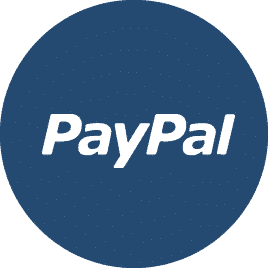 Around midday on September 23, Paypal announced that it would be integrating Bitcoin into its Paypal Payments Hub. This “Hub” is a payment platform that producers of digital content can use to allow their customers to easily pay for things like songs, movies, e-books, instructional videos, etc. Once Bitcoin is integrated into this platform, anyone who accepts payments through the Payments Hub will automatically be able to accept Bitcoin.

Now, as has been made clear throughout the last few months, news of merchant adoption does not have the positive impact on the Bitcoin price like it did last year and earlier this year. In fact, the Bitcoin price has actually been on a downtrend since July, despite a constant stream of news about merchants deciding to accept Bitcoin. So, why does merchant adoption no longer affect the price, and why did the price jump by 13.35% in response to the Paypal announcement?

The answer to the first question is this: the Bitcoin price used to respond positively to news about merchant adoption because the legitimacy of the digital currency was in question, even by people in the Bitcoin community itself. If I can’t spend Bitcoin anywhere, then what good is there in buying it? Therefore, every time Bitcoin users got a new place to spend their Bitcoins, the currency became a little more legitimate in the eyes of skeptics and potential investors. As a result, more people invested in Bitcoin, subsequently increasing the price. However, those newly “converted” investors did not buy so they could spend, they bought because they foresaw an increasingly legitimized Bitcoin and expected the value to go way up; in other words, they saw an opportunity to use Bitcoin for fiat profit.

But that stage in Bitcoin’s evolution is over, it has already proven itself legitimate in terms of merchant adoption. Now, whenever a new business accepts the currency as payment, no one is surprised — merchant adoption is old news! The major developments that will move the price will now have to occur higher up in the economic infrastructure. Suppliers accepting Bitcoin, wages being paid in Bitcoin, governments either banning or embracing Bitcoin; these developments will signal increasing or decreasing legitimacy, and will either spur new investors to buy in or old investors to cash out.

So why did Paypal produce such a spike in the price? The answer is quite simple. Paypal accepting Bitcoin has been highly anticipated ever since major companies began accepting the currency. Paypal’s integration of Bitcoin into their Payments Hub is one step closer to outright acceptance, so of course the community was ecstatic. Obviously, a news story that has been as highly anticipated and hoped for as Paypal would cause a burst of excitement and buying. That is all it was, though, a burst of excitement, not a signal of an increase in Bitcoin’s legitimacy or staying power. At the end of the day, Paypal is just another merchant. The price reflected that reality, returning to the $390s to $400s range that had established itself before the news — showing that the gains made in response to the Paypal news was merely the celebration of the partial arrival of a long awaited story, and not an influx of new investors.

Our ceteris paribus (all things remaining equal) forecast from last week came true. Except for the major, unexpected price spike that came from the Paypal news, the Bitcoin price stayed within that $390s to $400s range throughout the entire week.

The overall price movement for this week, a 1.95% drop, was incredibly stable compared to last week’s drop of 13.87%. For our ceteris paribus forecast this week, we will advance two possibilities. The first possibility is that the Bitcoin price will continue to hover in the $390s to $400 range. On the other hand, the price could continue falling, going below $390.