This is the Coin Brief weekly Bitcoin price report for the week of September 14, 2014-September 20, 2014. This week was one of great fluctuation; the Bitcoin price fell from the mid $470s to mid $480 range that the market had persisted for a while, dropped as low as the $370s, and finished the week out in the high $400s. Overall, throughout the duration of the week, the price fell by 13.87%. 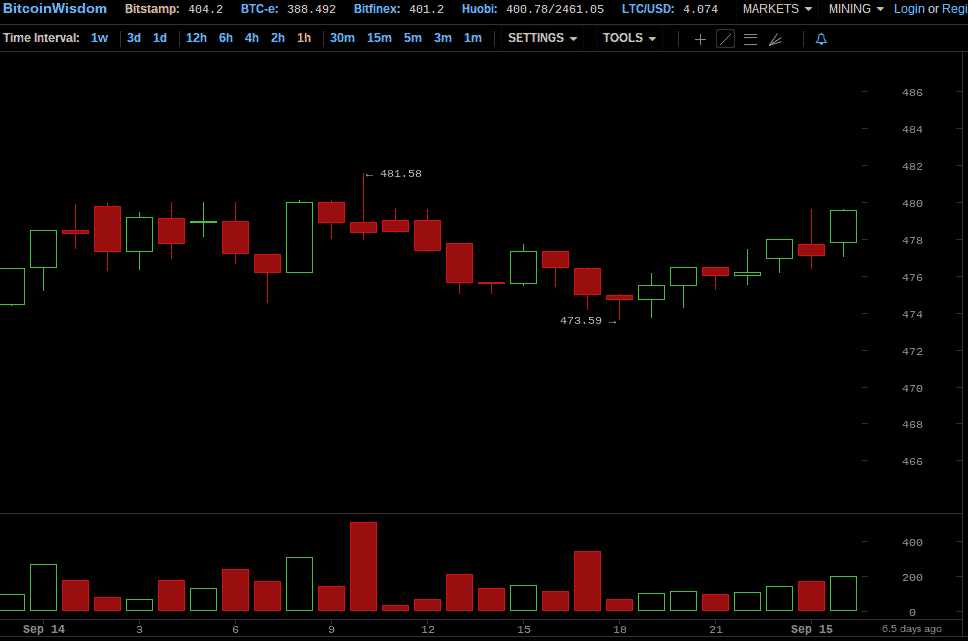 The week started out on Sunday, September 14, at $476. The first day of the week was a relatively calm one, with the Bitcoin price hovering between the mid $470s and the low $480s. Sunday closed on a quiet note at $478, barely moving from the start of the day. 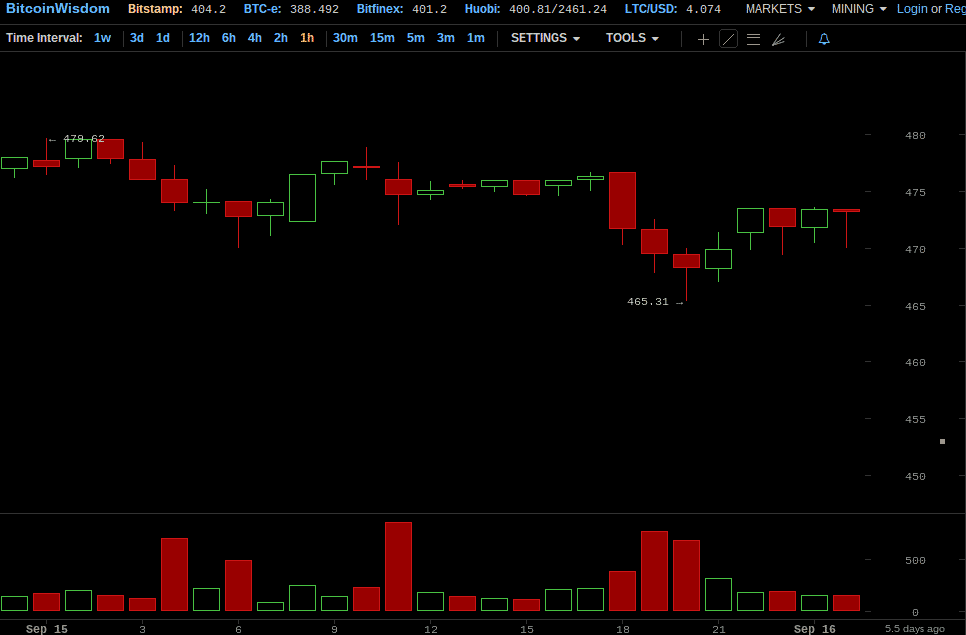 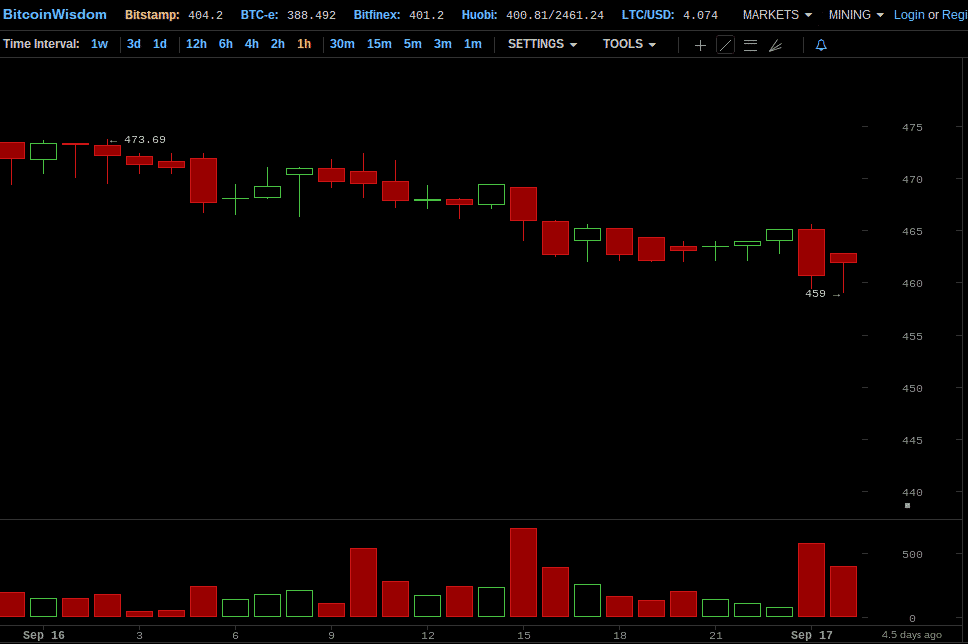 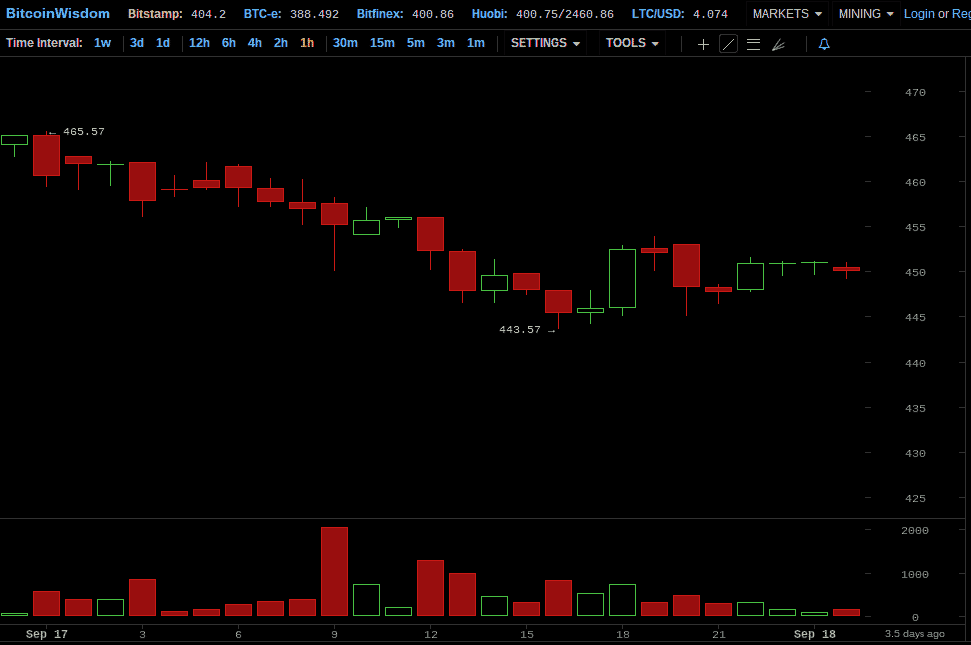 This day kicked off at $465, down 1.48% from the open of the 16th. The first half of the day served as a continuation of the previous two days, with the Bitcoin price gradually dropping. by the close of the noon hour, the price had hit $448 — going below $450 for the first time since Spring (not including the BTC-e flash-crash). After going under $450, the price leveled out for the rest of the day, hovered between the high $440s and the low $450s, and finally closed at $451. 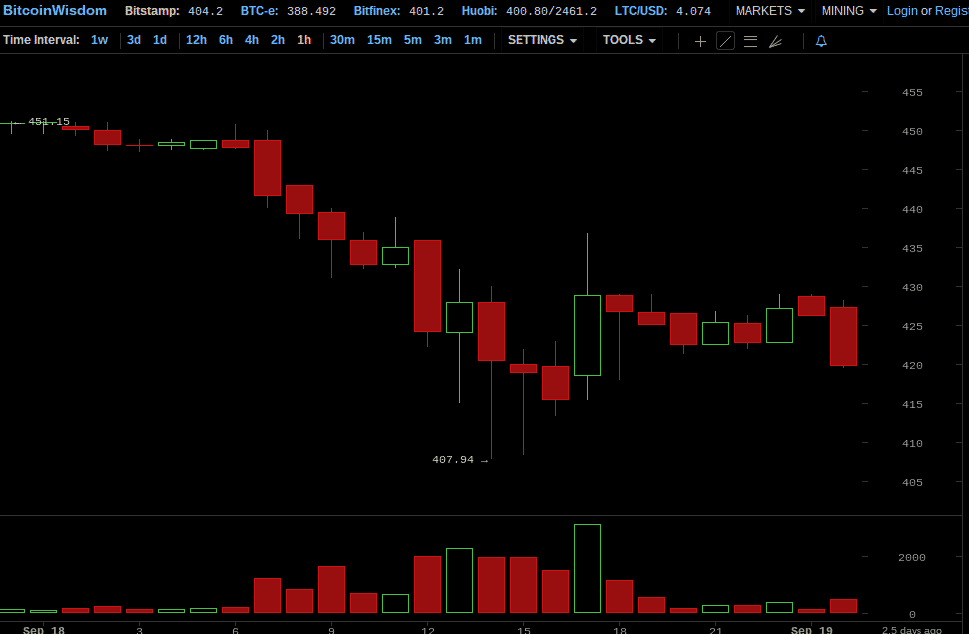 On Thursday, September 18, the Bitcoin price suffered considerable losses, dropping dramatically throughout the duration of the day. Opening at $451, the price was down 3.01% from the start of the previous day. For the first few hours of the morning, the price stayed in the high $440s to low $450s range that characterized the latter half of the 17th; but then, starting at 7 AM, the price dove downward. The Bitcoin price was at $448 at the top of 7 AM, and by the end of the noon hour it had fallen to $424. The price continued falling for the next few hours, and hit $418 by the close of 3 PM, with an hourly low of approximately $408. Afterwards, the price returned to the mid-to-high $420s, and stayed there for the rest of the day. September 18 ended at $429. 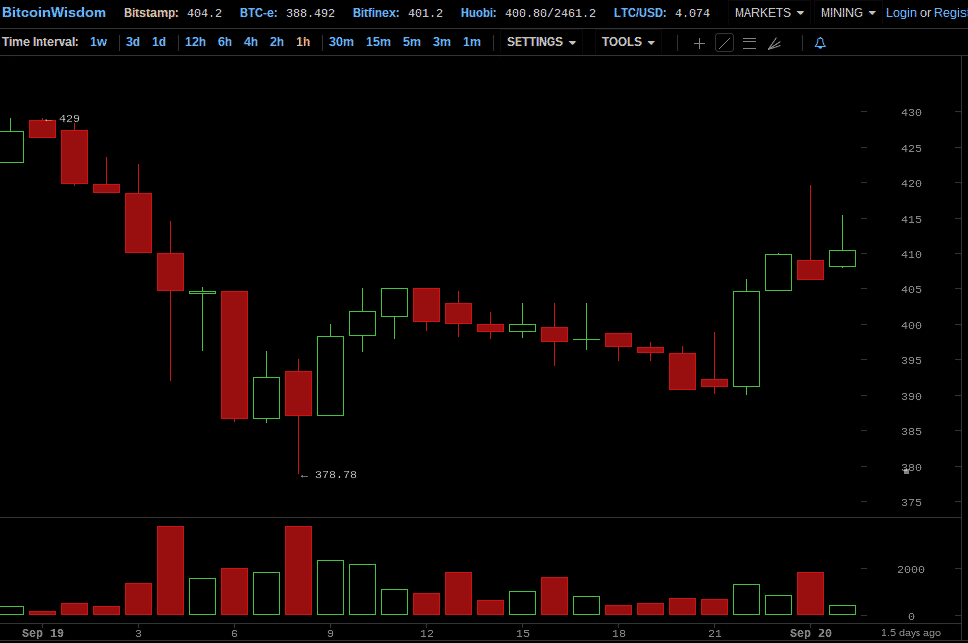 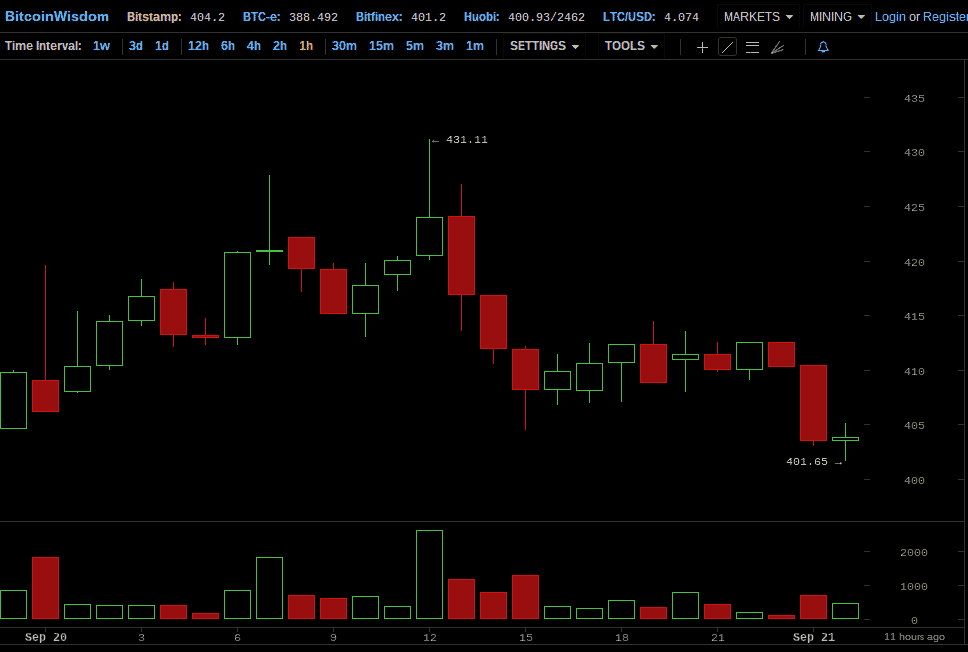 September 20 was a day of attempted recovery on the market, which ultimately failed to maintain its relatively significant increases. The day started at $409 — down 4.66% from the open of September 19. The Bitcoin price creeped upwards for the first half of the day, returning to the $420s at noon, with an hourly high of $431.11. However, after the close of the noon hour, the price took another dive into the $400s. The price fell to $408 by the close of 3 PM, and stayed within a $408-$412 range for the rest of the day. Our week ended at midnight on the 20th, with the Bitcoin price at $410 — a modest 0.24% gain from the beginning of the day.

The ceteris paribus (all things remaining equal) forecast we gave for the Bitcoin price in last week’s report ended up severely missing the mark in terms of what happened in reality. However, that inaccuracy just goes to show the essential uncertainty of the economy and the futility of employing quantitative analysis to any aspect of the economy — let alone the Bitcoin price, which is wildly volatile. Although our forecast last week was very inaccurate, it was a drop in the bucket compared to the inaccuracies in essentially every quantitative analysis that has been posted on any Bitcoin-related website. Therefore, the best analytical method is one based in the praxeological economic method, for that is the basis of our ceteris paribus forecasts and it has been far more accurate than any prediction based on quantitative tea leaf reading. Even though our method works far better than other analytical methods, it can only go so far, a fact which can clearly be proven by this past week’s price activities.

Last week, we said that–given the Bitcoin price activity during the week — the price would stay relatively sideways, staying between the $470s and the $480s, ceteris paribus. The factors determining that trend, which persisted for nearly two weeks, obviously did not remain equal. As we warned in our forecast last week, some unforeseen change in valuations caused individuals to embark upon a selling spree that caused the Bitcoin price to fall a total of 13.87% throughout the course of the week. We will not use this report to analyze the cause of this price drop, for there is no concrete reason and any attempt to explain the drop would be speculation, impossible to proof without a doubt. Thus, we will save the discussion on the theories behind the recent downward trend for another article.

As for next week’s price activity, there is not a clear trend that we can say will likely prevail. Although the Bitcoin price recovered slightly from its dip into the $300s, it has been fluctuating between the $420s and the $390s since the 19th. Therefore, our ceteris paribus forecast for the coming week is this: the Bitcoin price will continue to fluctuate, moving anywhere between the $300s and $400s, until the market finds a new resting place.