Skip to content
You are at: Home » News » Mining » Bitcoin platform Cex.io announces pause in cloud mining due to low profits

The chief information officer of the Bitcoin exchange and provider of mining services CEX.IO has announced that the company is pausing cloud mining due to the low profits that are being generated at the moment.

Jeffrey Smith said on Twitter that “taking into account the Bitcoin price drop, and the increase of difficulty, we will pause cloud mining after the next difficulty increase“. The price of the world’s most famous cryptocurrency was a bit over $268 at the time of writing. 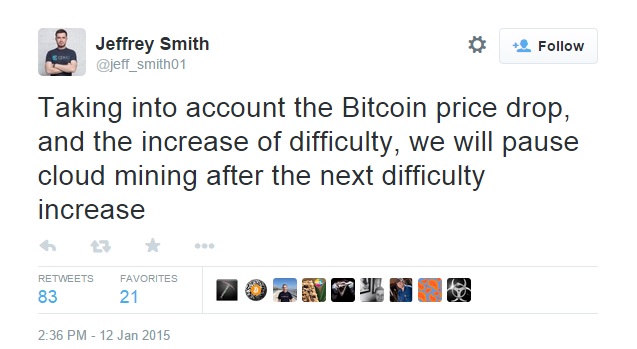 The decision won’t interfere with the remaining operations. CEX.IO has assured it will continue operating as a full service exchange platform for trading cryptocurrencies and fiat money.

In a blog post, Smith quoted the 11.5. paragraph of the platform’s terms of use to justify the decision. “Mining with using User’s Gigahashes can be stopped by CEX.IO if the amount of the Maintenance Cost exceeds rewards for each mined block or if the mining is economically inexpedient”, reads the document.

This means the company has the right to temporarily alt the mining operations. “All GHS formerly purchased by CEX.IO users remain their absolute property, with appropriate figures reflected in users’ profile balance. Additionally users will be able to manually enable mining with Gigahashes by their own choice”, the post adds.

The suspension was announced after some of the platform’s customers reported disruptions to their cloud mining service. CEX.IO attributed the problem to thrid-party complications, Coindesk reports, and claims that the two situations are not connected.