Skip to content
You are at: Home » Reviews & Comparisons » Currencies » The Billion Coin (TBC) Review – How a Scam Goes Bust

The following article reflects the author’s opinion alone and is not investment advice.

There’s been quite the buzz over a coin called The Billion Coin (TBC), so I decided to dig a little deeper to see what all the fuss was about. TL;DR version: It’s a scam. Stay away at all costs.

The actual market cap of TBC

When I perform research on potentially profitable cryptocurrencies, I start by looking them up on Coin Market Cap. It’s a nice way to check out a coin’s price, volume, and history, and it has links to various resources about any given coin.

Unfortunately, I came to a dead end right from the get-go, as TBC isn’t listed there. No big deal—there are a lot of brand new coins that aren’t listed yet, and truthfully, finding a coin in its infancy has the potential to offer 10x the profit.

Now let’s check and see if The Billion Coin is on World Coin Index.  Again, no luck: it’s not listed there either. So it’s time to run a Google search and check out their website, TheBillionCoin.info. At first glance, it appears to be one of those cheesy slider WordPress themes that no one uses much anymore, at least not anyone who’s running a cryptocurrency promotional website.

On the site, the makers claim that The Billion Coin has a market cap in fourth place behind Bitcoin, Ethereum, and Litecoin. That seems like a stretch considering I hadn’t even heard of TBC until a couple of days ago. Given the fact that I study the crypto industry day in and day out, I’m going to guess that is a lie. If that were indeed true, TBC would be listed on Coin Market Cap.

The next image on the slider says “Get out of debt fast.” It seems like they’re preying on the emotions of desperate people—a classic telltale sign of a scam. The picture of the woman cutting up her credit cards is what anyone thinking about buying this coin should do so they don’t end up losing everything they have.

It gets even worse. According to the website, the current price of 1 TBC as of a few days ago was allegedly 68.2 Bitcoin—roughly $286,000.  However, today, the website claims that 1 TBC is worth 105.93 BTC. So the price of each TBC is 105 BTC, yet it isn’t even listed on Coin Market Cap? It’s almost comical that anyone would think this is true.

Apparently, The Billion Coin can be purchased and sold on the site’s exchange, but only there and nowhere else. There’s a page, and even a YouTube video (which, not surprisingly, has comments disabled), on the website dedicated to buying and selling TBC on the exchange. However, the actual exchange is “offline for maintenance,” so who knows if it was ever online to begin with.

The main question remains: why isn’t TBC exchanged on public exchanges like every other cryptocoin?

It should be clear at this point that anyone who is thinking about buying TBC should steer clear. However, those who still have a shred of hope in this project should read on.

According to its website, TBC is going up 2% per day, every day. In other words, the creators of this scam claim that the price never drops and always goes up. That’s not logical at all if the market dictates the price.  Markets go up, and markets go down; this is why the logic behind perpetual profits is fallible.

According to the TBC website, original stakeholders who purchased €100 of TBC on March 21, 2016, all received 10,000x gains in six months’ time and are millionaires. The site goes on to say that anyone who purchases soon will earn similar gains. Finally it says, “Buy as much TCB as you can afford today. The price of TBC will never be this low again!”. There’s also a video version of this post narrated by a $75 spokesperson on Fiverr. 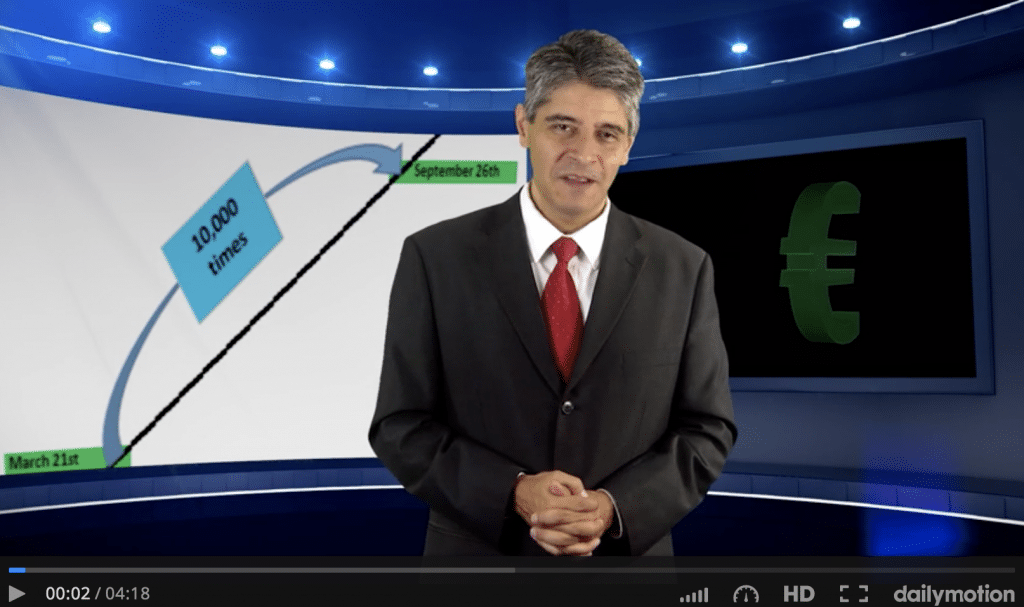 As we stated before, at the time of writing, the alleged price of 1 TBC was 68 BTC, and it’s now 105 BTC, so it would be tough to really load up on it. To create one billion millionaires is TBC’s mission, or so the site says. TBC also wants to end world poverty. In all reality, its makers have lined their pockets scamming people and might disappear any minute.

Enough about the cheap website. Let’s take a look at what members on Bitcointalk have to say.

On Bitcointalk, there’s a thread about TBC that was started on May 16, 2016. The original poster, savasori, has a trust rating of -2, meaning “trade with caution.” He explains the idea behind TBC in one large block of text that’s nearly impossible to read. The second comment by Woody20285 sums it all up pretty well:

Anyone who has been in the cryptocurrency industry long enough knows that this type of scenario can never be true.

Another comment by leigh2k14, a legendary member on the forum, says, “Time to sell the wife and kids, I’m all in on this bad boy.” You’ve got to appreciate the sarcasm.

At the end of this Bitcointalk discussion, one user asked, “[Is] this [a] scam or not?” Mr.Pro, a senior member, quickly replied, “I don’t know if you are blind or dumb or maybe it could be both.”

The TBC Wallet Is Disabled

In relatively recent news, the TBC web wallet was disabled on January 31, 2017, and all holders were encouraged to move their coins to yet another centralized site, which apparently doesn’t work either.

Because there are no open exchanges that allow for TBC to be traded and the TBC mediated exchange doesn’t work, holders have to convince others to buy their coins. In terms of P2P sales, generally on Facebook, the only way to sell TBC is to rope someone else into the scam.

Holders were allegedly trying to sell their TBC though Facebook groups for less than $0.05 each—a far cry from their listed price of $286,000 each—just to recoup some of their losses.

The real value of TBC is 0. Truthfully it’s absolutely worthless, so don’t allow these con artists to separate you from your money by convincing you to buy this coin.

Who Does This Scam Target?

The TBC scam isn’t targeted at people who are already actively trading cryptocurrencies and understand the business. Instead, it’s aimed at people in third world countries, and it’s trying to separate them from their hard-earned money. For the most part, TBC is being heavily promoted in Africa and the Philippines. TBC scam artists are simply robbing poor people.

The sad truth is that they’re good at it. According to Similar Web, TBC’s site gets around five-hundred thousand visits per month.

To recap, the TBC scam took place between April 2016 and June 2016. If this scam, or one similar to it, comes back online, avoid it like the plague. Don’t invest in anything that makes impossible claims of something for nothing. I can also assume that the name TBC was intentionally chosen so that it might be confused with Bitcoin’s BTC.

While the makers of The Billion Coin claimed that their goal was to make one billion millionaires and battle world poverty, it’s clear that the real goal was to scam one billion people out of €100. If you’re presented with the opportunity to buy The Billion Coin, avoid it at all costs. In the future, remember that 99Bitcoins supplies you with tools such as the Bitcoin Scam Test to try to assess whether cryptocurrency opportunities are legit or not.

Had your own experience with TBC? We’d love to hear about it in the comment section below.