Skip to content
You are at: Home » Guides » Trading » A Real Live Example for Bitcoin Trading for You to Copy

A few weeks ago we talked about the basics of Bitcoin trading and gave a very thorough overview on the subject. We talked about how you can use Bitcoin CFD trading from companies like Plus500 or Fortrade in order to trade Bitcoins without actually owning the currency. Keep in mind that when trading CFDs your capital is at risk. Today I want to give a real live example of an actual trade we put together.

Putting it all Together – An Example Trade

This is not a specific trading recommendation but an illustrative example only.

The objective here is to find a promising medium-term trade to take best advantage of our CFD trading method. We will be using the methods described above.

Market Overview for the 26th January 2016

Medium-term opportunities are most easily found on higher timeframe charts. A daily chart suggests a possible triangle pattern forming as of the 26th of January, 2016.

Zooming in, a 4 hour timeframe better reveals the pattern structure, as well as other notable market features: 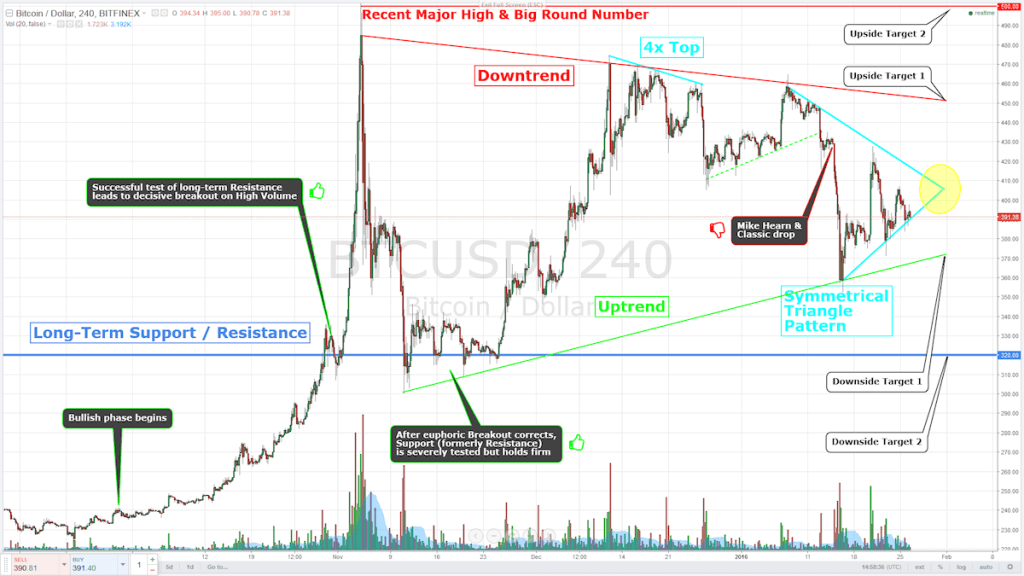 The Long-Term Support / Resistance line in blue is of primary importance. This approximate level was established April 2014, during the initial correction from the wild spike above $1000. Following the correction from Bitcoin’s all-time high, price turned at this level to rally for a couple of months before resuming its downtrend. During late December 2014, the failure of this level to act as Support led to it becoming Resistance for 2015, until it was breached in November. For as long as we remain above this level, Bitcoin can be assumed to be bullish.

The bullish phase has been limited by the red Downtrend line. The breakout clearly failed at $500. Price has struggled to approach this $500 level ever since, being turned back ever lower by the bears. The $460 level represents the turning point of the last two impulses towards $500. The market is bouncing between trendlines at this time; it’s currently in ranging mode.

On the positive side, the green Uptrend line was formed when “Long-Term Support / Resistance” was tested to the downside. This line was tested to the downside when Mike Hearn had his “whiny ragequit” and Bitcoin was declared dead for about the 90th time, this time by the Washington Post. Sour grapes and dubious journalism aside, the green Uptrend line held firm.

Upside exuberance and downside drama are reaching a point of agreement, as demonstrated by the converging red and green trendlines (with apologies to the colour-blind). It seems the zone around $400 currently represents the current balance point between bulls and bears. This is confirmed by the formation of the second Symmetrical Triangle Pattern, also focused on this $400 zone. So, we have a near-term triangle forming within the medium-term triangle defined by the trendlines; very interesting. Let’s see what the venerable Thomas Bulkowski has to say about the Symmetrical Triangle Pattern:

“Symmetrical triangles, sometimes called coils, are a popular chart pattern because they appear often and perform reasonably well in a bull market. This opinion is based not on the performance rank, which is mediocre, but on trading experience.”

OK, so that checks out with the view that Bitcoin is in a bull market. However, they’re not the highest-probability pattern. Let’s drill down into the pattern’s statistical performance, which Bulkowski has compiled from his long experience in American stock markets: 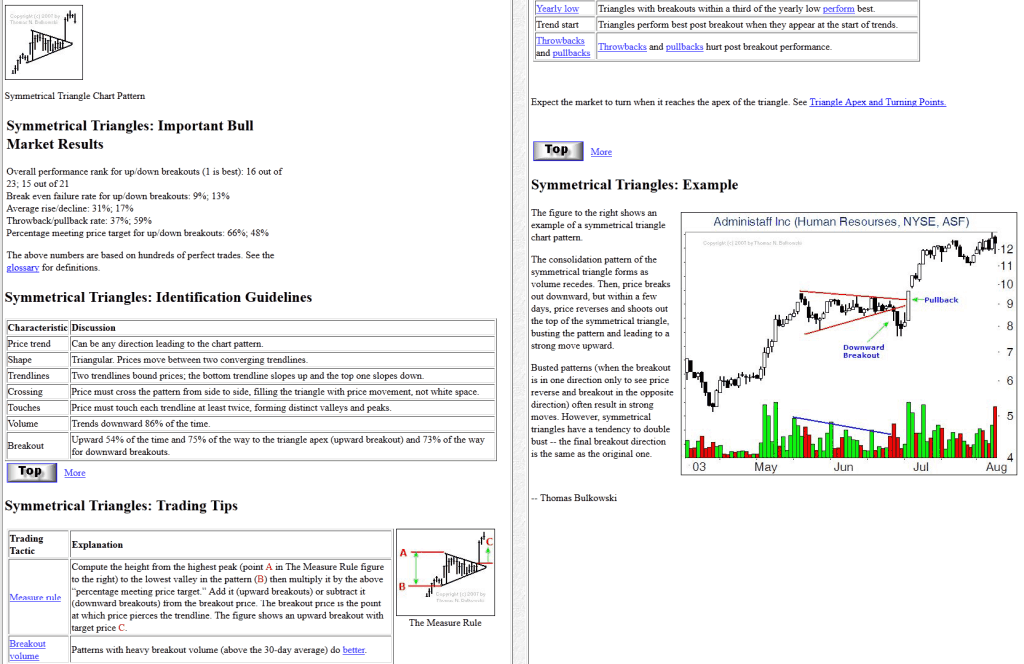 Let’s analyse our triangle in relation to the Identification Guidelines. The Price trend obviously applies, as do the factors defining Shape, Trendlines, Crossing and Touches (at least two touches are seen to the upside and three to the downside). Volume is indeed declining. Regarding Breakout: the apex is projected 24 days from the peak at A. At the time of writing, the triangle pattern has persisted for 19 days. The triangle is thus overdue, at roughly 79% of the distance to the apex. The pattern may thus be reasonably expected to resolve shortly.

Interestingly, Bulkowski goes on to say, about Triangle Apex and Turning Points, that triangles price patterns show a tendency to resolve around their apex, in other words within a few days of when the up and down lines meet… 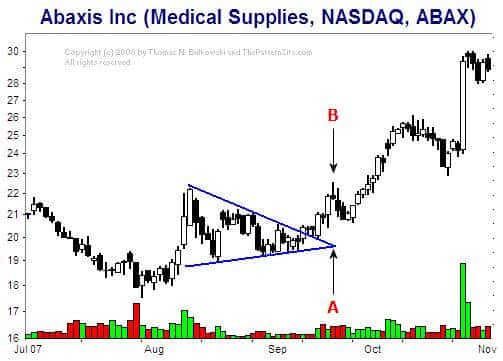 Point A shows the triangle’s apex, point B shows the pattern’s target hit.

Bulkowski’s research put the chances of resolution near the apex between 60% and 75%. This would put the expected resolution of the current, smaller triangle around the end of January / start of February, which is when the Classic team has projected to release their code.

Indeed, it does make sense for the market to monitor the Classic hardfork risk before deciding its future direction. If it appears that miners will support the Classic hardfork, Bitcoin price may be expected to plummet, testing the uptrend and likely the $320 support level. On the other hand, if the hardfork is rejected in the interests of maintaining cohesion then doubts will be dispelled. Markets hate uncertainty and each time a hardfork has been proposed – whether XT, Classic or via certain BIPs – the market has fallen. Whatever you might think of forcing a higher blocksize, if the hardfork attempt fails then sentiment and price will likely soar. A restest of the Downtrend line and $500 resistance level is quite possible.

To recap, the above levels were selected as Upside or Downside Targets for either a long or short trade, depending on how the triangle resolves: 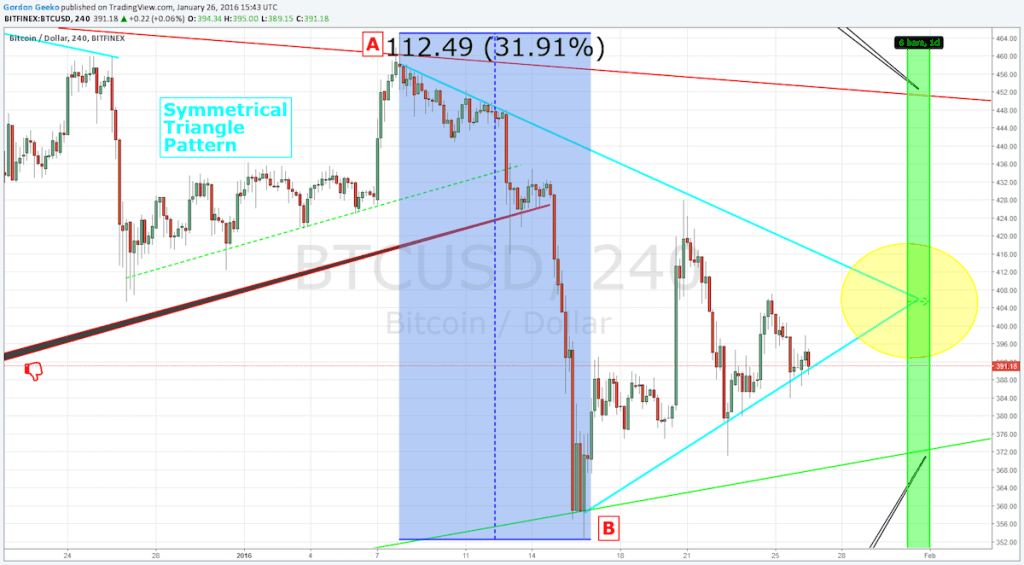 The range between the highest peak (A) and lowest valley (B) is $112. This suggests an upwards breakout target of +$73 for a long trade, and a downwards breakout target of -%$53 for a short trade. However, until such pattern targets have been tested within the Bitcoin space, they should not be relied upon. As there’s also no way of knowing when and which way the pattern will resolve, these targets have not been charted.

This trading perspective was published to Trading View on the 26th of January 2016 for comment. Press the “play” icon to see how the trade develops.

At the time, the live chat indicated that many others are looking at similar triangular patterns, notably Saj who linked the following daily Bitcoin Wisdom chart: 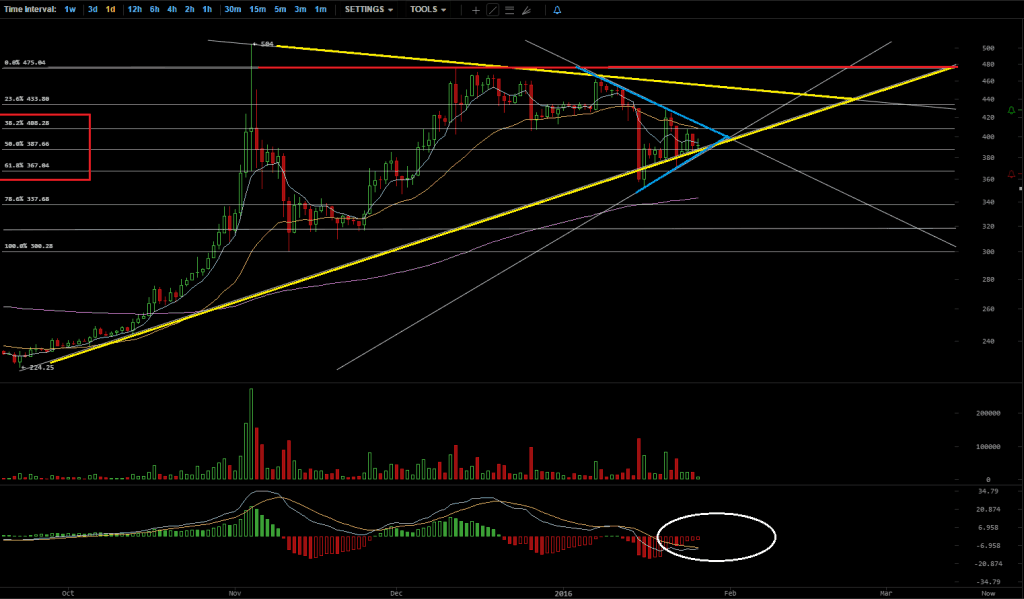 If others traders are also watching the pattern it raises the odds that the market will react to it.

The above daily MACD suggests an upwards break although price action, which is currently hugging the supporting trendline, suggests a downwards break. Preference should always be given to price above indicators. However, the lack of confirmation from indicators makes this a somewhat lower probability trade. It should therefore be traded fairly lightly and with tight trailing stops. An experienced trader might risk around 2.5% of trading capital on a trade like this, up to a maximum of 3%.

Developments as of the 28th of January 2016: Short Trade Opened

The pattern appears to be resolving to the downside. As the triangle was decisively breached, the down move accelerated. This indicates that the market did indeed recognise and was paying attention to the triangle pattern formation.

A short was opened shortly below the break at $392.  The Uptrend line is the Downside Target 1. Notice that the previous significant low would also make a decent target. Following the “whiny-rage quit” incident, price could not decisively breach the $360 level on the 4 hour, so it seems like a probable support level.

Price will be closely monitored around the Uptrend, with a view to taking profit if price bounces sharply from this line. As there is little confirmation from indicators or higher timeframes such as the weekly or monthly, it makes sense to take most of the profits (say 75%) at Downside Target 1.

The stoploss was set at $403; slightly above where price has been trading for a while now and also above the big round number $400 level. This trade provides a Risk / Reward ratio of 2.22, making it well worth the risk. 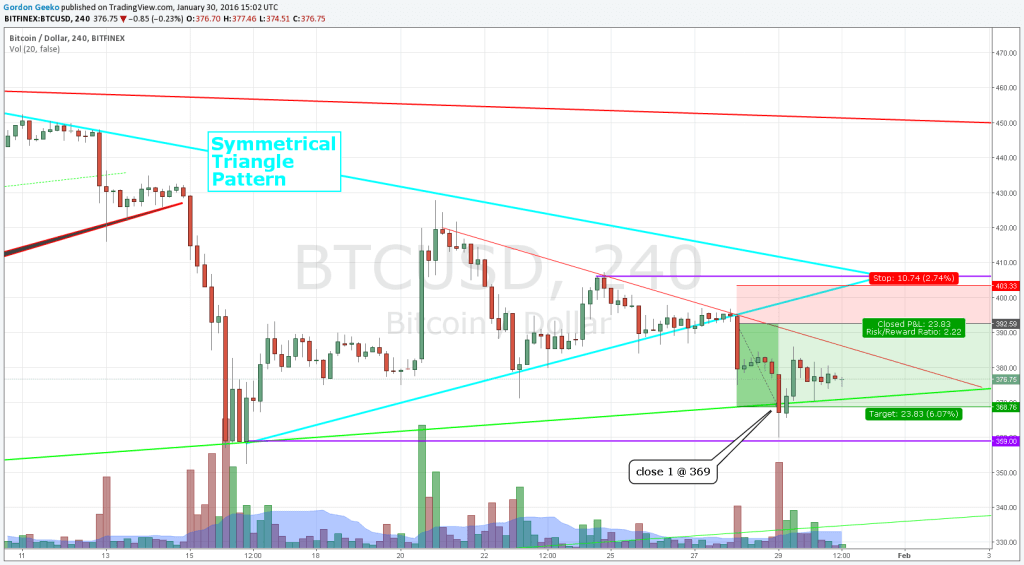 Further Developments as of the 29th of January 2016: Short Partially Closed

The triangle pattern has played out fairly successfully and profit was taken at the $369 level (remember to set your targets slightly before the next expected point of S/R, in case price is unable to reach them). Although more profit could have been made on this trade by setting a tight following stop, taking 75% of profit at the target line still nets a nice gain.

Note that while the candle wick reached down to $360, at which level there was no follow-through and price reversed quickly.

It may have further to fall, so if price remains below the triangle breakout level it will be interesting to see if a bottom develops around the apex date.

The next question is where to from here… It seems rather unlikely that price will make Downside Target 2 near $320. The blocksize drama seems to be resolving and it appears unlikely that Classic will receive much support. It therefore makes sense to move this target up to around the $360 support level instead, and move the stop-loss down to just above the last high, at $385.50. This ensures that the trade eithers make a little bonus profit or gets closed without loss. If the market continues sideways, it may be best to close the trade at minor rather than waste any further time, energy and capital opportunity.

If you have any questions about this trade or any other trade for that matter feel free to leave your comments in the comment section below and I’ll do my best to answer them. Good luck!