BitPay, one of the earliest payment processors for Bitcoin, has released the Android version of its open-source, multi-signature wallet dubbed Copay. The app is in beta, but it’s already proving to be an innovative implementation of the cryptocurrency’s core protocol. Copay enables multiple people to control the funds of a single wallet — any one of them can propose a transaction, but it takes a certain number of them to approve it.

The wallet is free to use — aside from Bitcoin’s normal transaction fees — and is now available as an Android app, Chrome extension, or a simple web app. This means that the application has a wide reach, and the platforms are all compatible with one other. As long as one has the secret key to join someone else’s wallet, it doesn’t matter if one is on his Android phone and the other is using her Chrome browser.

The Android version of Copay is the first mobile Bitcoin wallet to seamlessly integrate multi-signature transactions, a feature that has been built into the core protocol for years but was underutilized until very recently. It’s a useful feature that is mainly being used to beef up security of personal wallets, as in the case of BitGo — which recently received $12 million in venture funding for it’s ultra-secure multi-sig wallet. 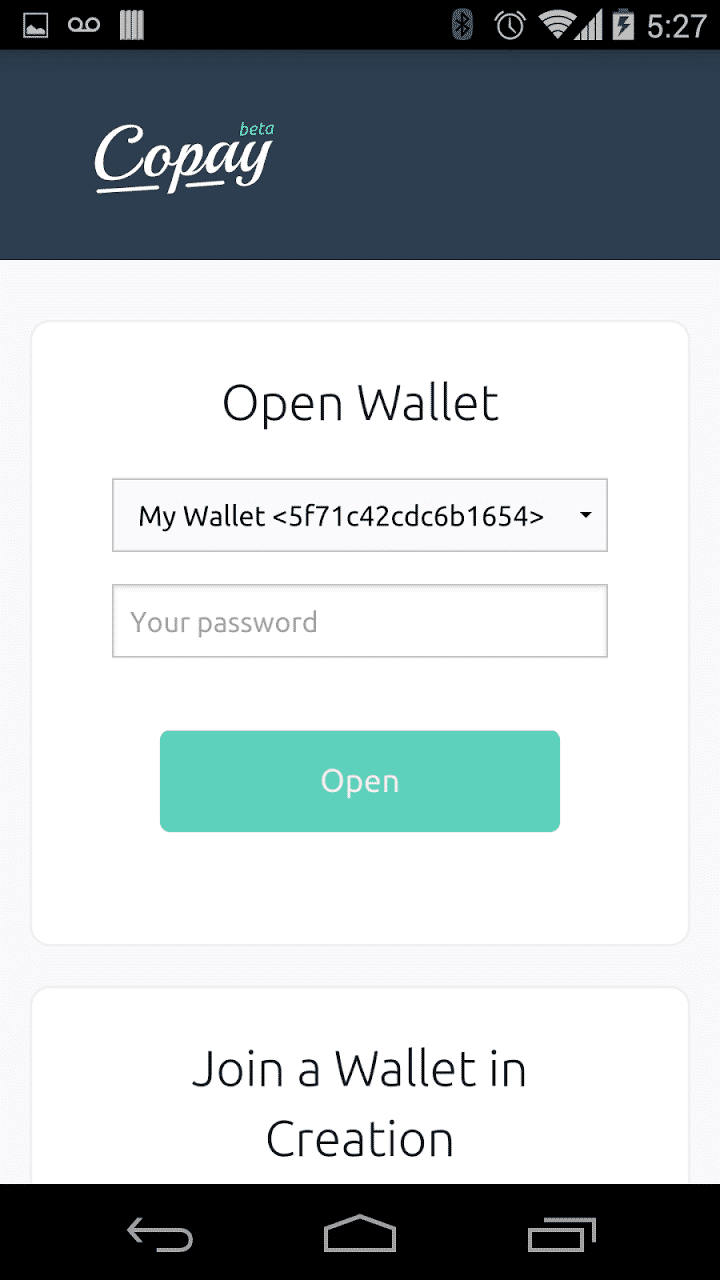 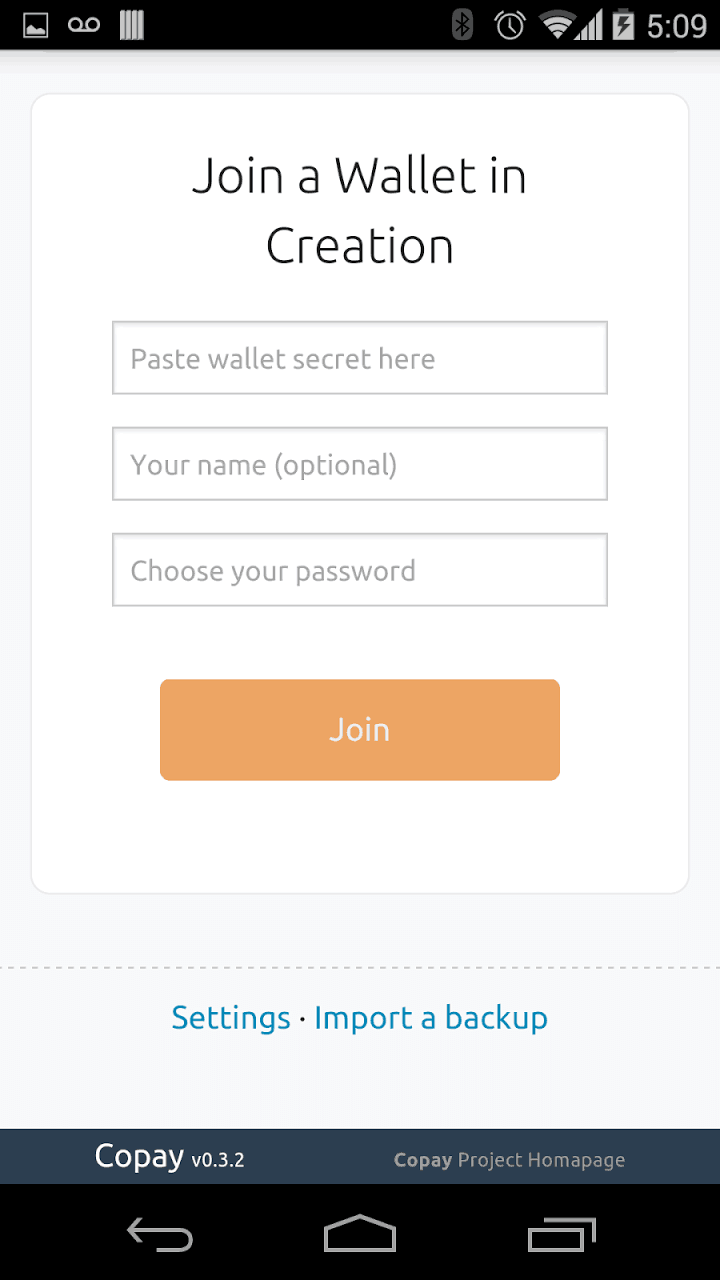 However, BitPay has taken a decidedly different approach to multi-signature wallets. Copay — which was first designed for internal use by employees and is now in beta — is geared more toward groups of people each holding their own fraction of a key to the same wallet, rather than a single person holding all of them for a personal wallet. This opens up a host of interesting possibilities for companies, organizations, and families that want to manage funds in a fair and democratic manner.

Copay streamlines the process of creating and customizing a multi-signature wallet that depends on the permissions of several people to spend funds. When creating a wallet for the first time, it’s possible to choose between 1 and 12 total copayers, all of whom are able to propose and vote on transactions. The number of signatures required to finalize a transaction can be set between 1 and 4, depending on the amount of copayers selected. The wallet can also be labeled with a useful name, such as ‘vacation funds’ or ‘company reserves.’

Once the wallet is created, Copay generates a secret code that can be shared to the other intended copayers. It allows them to claim their fraction of the multi-signature wallet and become democratic participants in spending those funds. 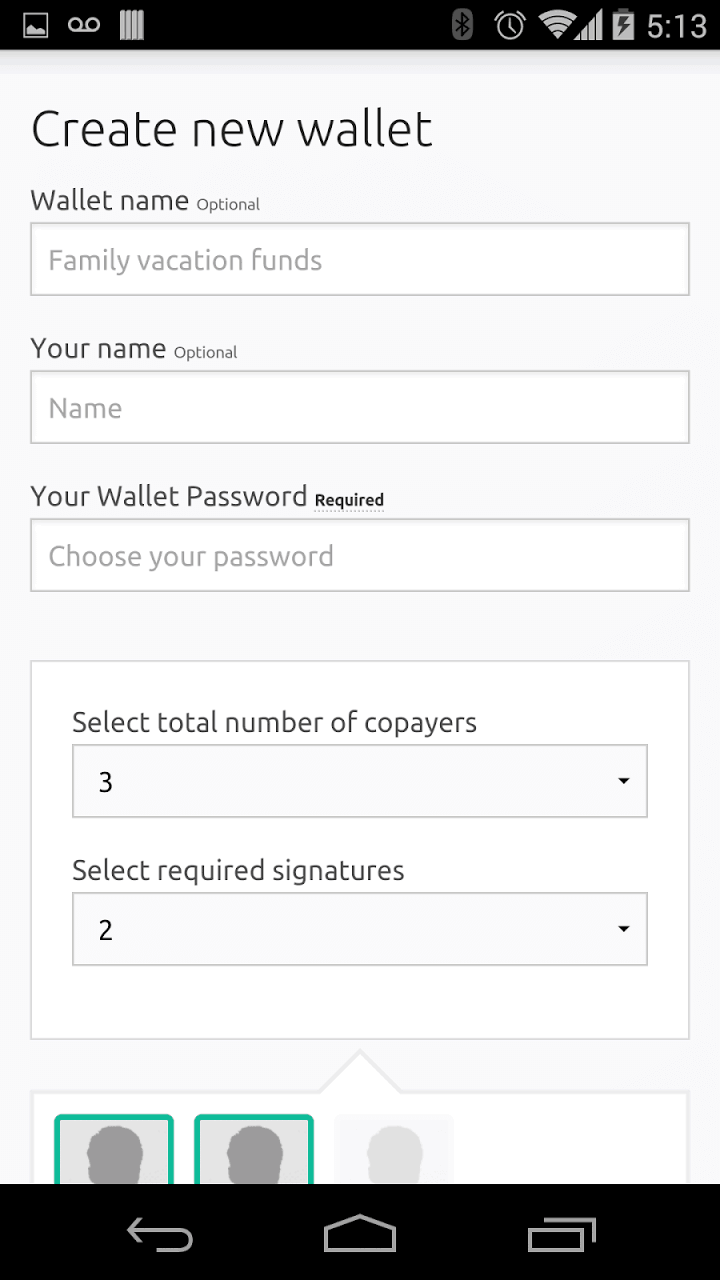 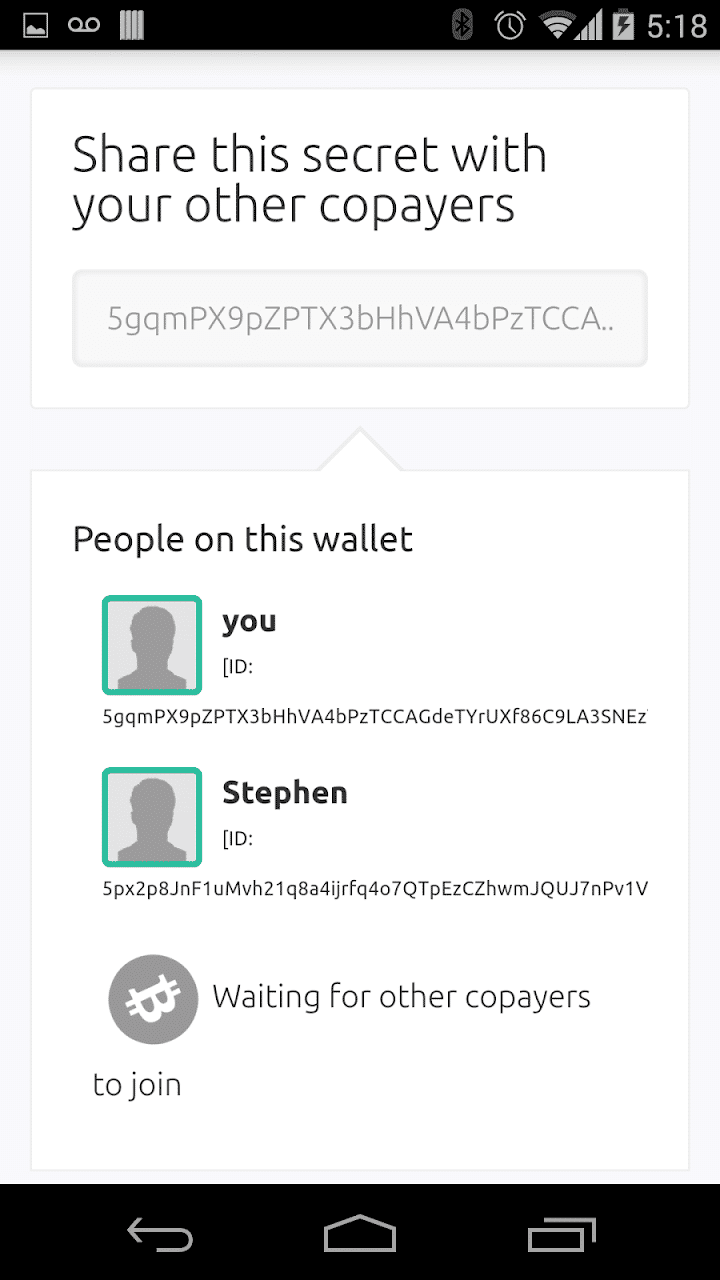 Depending on the rules that were set at the creation of the new wallet, there could be as many as twelve different people with equal control over a single stash of Bitcoin — however, in that specific case Copay limits the number of required signatures to just one. This is probably due to limitations of the code, but the prospect of a 1-of-12 wallet is both absurd and interesting. Twelve people would all have the ability to spend funds from the wallet on a whim — that money isn’t going to last for very long.

Needless to say, a 1-of-12 multi-sig wallet would be impractical in most cases. But more useful variations made possible by Copay are those that require at least 50% agreement among participants to sign a transaction: 2-of-3, 3-of-5, or 3-of-6 for instance. Beyond that, choosing to have 7 or more copayers doesn’t allow the option of requiring at least 50% of them to approve transactions. Again, this is likely due to limitations of the code but may be modified in the future.

Now that Copay is released to the public in beta form — and on three different technological platforms, no less — the possibilities are only limited by one’s imagination.

Suppose that six friends start a company together, and they have some fantastic ideas but very limited capital to start with. Unfortunately two of them are very bad at managing money, but the company won’t work without their creative ideas.

To rectify this problem, the top executive can create a 3-of-6 wallet with Copay and use it to store a certain amount of Bitcoin for use on company expenses. Any one of the founders can propose a transaction, but it takes at least three to agree and finalize it. That way Bob won’t spend all the company cash on margaritas without permission from at least two of his colleagues. 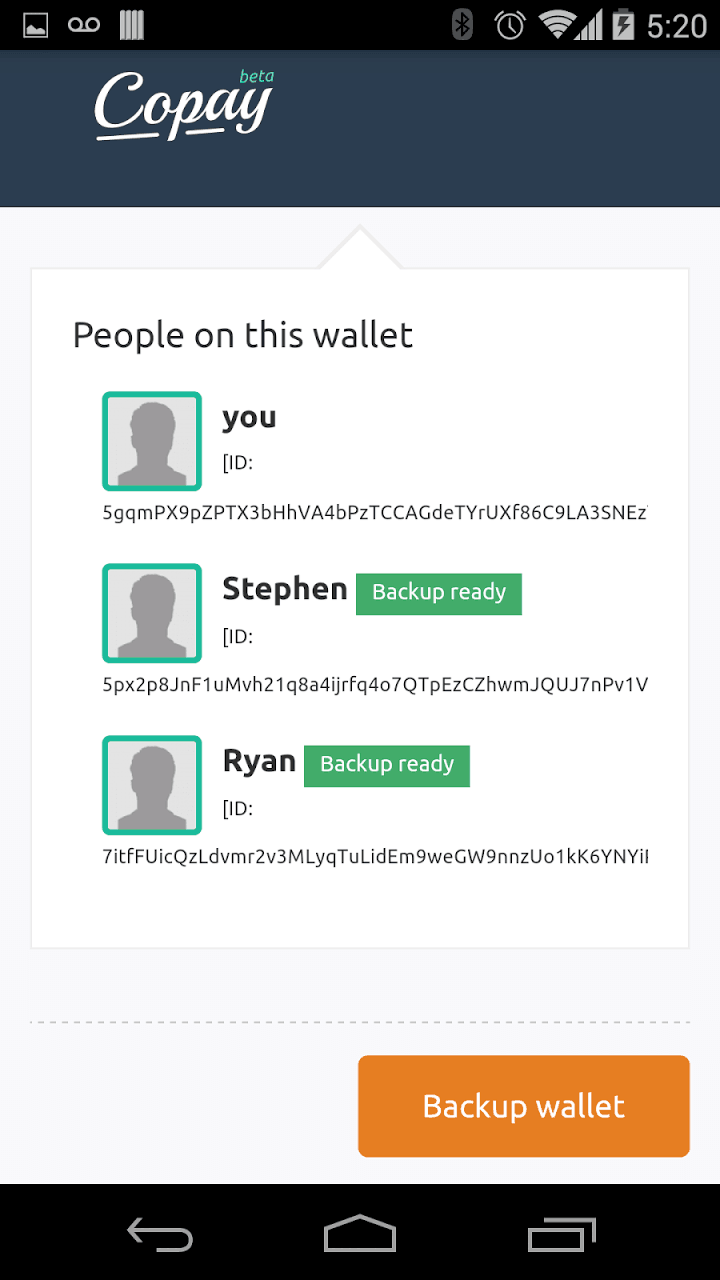 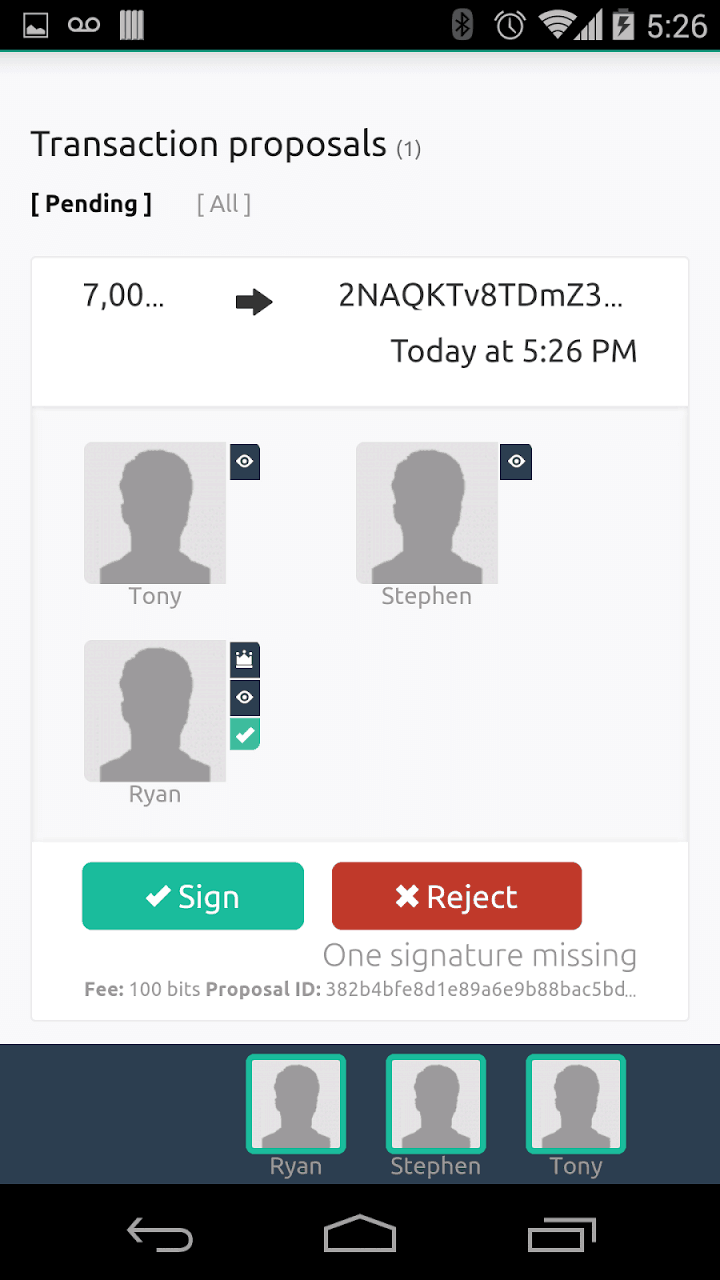 Now imagine a different use for Copay, this time in a family setting. Five people living in a house together don’t always get along, and they certainly don’t always agree on how much money to spend on things that would potentially benefit all of them.

Copay introduces a democratic mechanism for spending money that would allow family members to vote on where and how to allocate funds for the greater good. Suppose the father creates a 3-of-5 wallet and gives keys to his wife, daughter and two sons. Now the parents can propose a family dinner at Red Lobster, and if any one child agrees on the proposal then it becomes finalized. If the other two children don’t like seafood, then they’re out of luck — the Bitcoin blockchain has the last word on this matter.

Multi-signature transactions are just one example of smart contracts — referred to as “distributed contracts” on the Bitcoin wiki — which are possible with the Bitcoin technology. The system allows users to set up decentralized systems for managing contracts in a trustless manner — including multi-sig Bitcoin addresses and Kickstarter-esque assurance contracts. This is what insiders refer to when they say Bitcoin is the first programmable currency.

However, it has taken until 2014 for companies and developers to truly make multi-sig — and the majority of these smart contract possibilities — usable for anyone but computer programmers and hardcore enthusiasts. This year finally marks the beginning of Bitcoin smart contracts getting implemented for use by the general public. The aforementioned BitGo is merely the most successful thus far in this budding subsector of Bitcoin.

Now BitPay — which is primarily a payment processor that helps over 30,000 businesses accept Bitcoin — has given back to the community in a new way with its innovative multi-sig wallet. Copay pushes the boundaries of what’s possible with Bitcoin and it unlocks new potential for democratic and fair management of funds by multiple people. The implications for companies and families could be huge, and this early beta is merely scratching the surface.