Mining pools allow individual miners to join their mining resources with other miners, to improve their chance of mining a block and earning Bitcoins. There are several pools to choose from, that are different in size and the payment methods they offer.

If you want a detailed understanding of how mining pools work and reviews of each one keep on reading. Here’s what I’ll cover:

1. What are Bitcoin Mining Pools?

New Bitcoins enter circulation as a “prize” for miners who managed to guess the solution to a mathematical problem. The winning miner gets to add the latest block to the blockchain and update the ledger of Bitcoin transactions.

For a detailed explanation about mining watch this video

By design, the more miners you have, the more difficult it gets to solve the math problem, and vice versa.

This system is called ‘mining difficulty’ and it was designed to regulate the flow of new Bitcoins into the system (i.e. to prevent inflation).

As more and more people jumped on the mining wagon, the mining difficulty rose to a point that it became unprofitable to mine with a home operation.

Throw in the initial & ongoing costs involved in home mining (buying the gear, electricity bills, etc.) and not only you’re not making a profit, you’re actually losing money.

With mining pools, miners manage to solve problems more often than they would mining solo. The rewards are then split between the pool members, proportionally to the amount of hashing power their gear contributed to the solution.

The mining pool owner usually charges a fee for setting up the pool as well. The pools vary in their payment methods, as well as in the fees they charge and other parameters.

2. How to Choose a Mining Pool?

Here are a few factors to consider when you’re choosing a mining pool:

Pool size – Bigger pools offer more regular payments. However, the payout is smaller because it’s shared among more members. Smaller pools offer less frequent payments but larger payouts. Whichever you choose, the return should even out in the long term.

Fees – Some Bitcoin mining pools charge fees, and some don’t. Fees can range from as little as 0%, and go as high as 4% off the reward.

Reliability and security – An important thing to look out for is whether you can trust the pool to not cheat and steal your funds, or not get hacked and lose your earnings.

A good way to mitigate such risks is by joining a more veteran, established pool. Make sure to also read user reviews before you join, keeping in mind that there’ll always be disgruntled users so nothing should be taken at face value.

Payout policy – Whether you want regular daily payments or to get paid whenever a block is solved by the pool, make sure to do your due diligence before you sign up to a pool.

Before we can understand how mining pool reward methods work, we need to first understand what shares are, in relation to mining.

Simply put, shares are units that allow pool owners to calculate an individual miner’s contribution to the hashing effort. Whenever miners are mining via a pool, they receive shares that are proportional to their contribution to solving a block.

Miners can then get paid by the pool, according to the amount of shares they received.

To be clear, in terms of the Bitcoin network, shares are invisible, they are only used internally by the mining pools. According to the share amount the pool’s payment can take several forms.

In a PPS payment scheme, miners receive shares that can be paid out at any point along the hashing process. PPS allows miners to get paid for shares they received, regardless of whether a block has been solved during their participation.

To achieve that, the pool operators pay miners from their own balance. The shares’ rate is fixed and known in advance.

A newer version of PPS exists, PPS+ rewards. This method takes the form of PPS as well as the TX fees included in the block. The reward TX fees are distributed using PPLNS.

This payment method guarantees payments and leaves the miners with very little risk of not being paid for their contribution. The downside of this scheme is the high fees the pool owners charge, to mitigate the risk they take by paying regularly.

The more hashing power you have and the longer you mined for the block, the more shares you can submit. Once a block is found, the pool pays the miners according to the amount of shares they received.

However in this payment method, the value you will receive for each share will equal the block rewards divided by the total number of shares submitted by all miners.

This means that the more miners that join the pool, the lower the value of each share you receive.

This payment method was designed to prevent miners from pool-hopping.

Your mining time and hashing power are calculated into a ‘scoring hash rate’ score. The longer you stay on the pool, the greater your score is and the greater the value of the  shares you receive.

Once you stop mining, your score gets smaller and the value of your shares drop accordingly. Miners are rewarded once a block is found.

In PPLNS, miners only get paid for shares received during a predefined “window” that ends with the solving of a block.

Unlike other payment schemes, shares received outside of the window will not be rewarded at all. This window can either be defined as a time frame (uncommon), or by a certain number (N) that represents the last shares received up to the block solving.

For example, if N equals 1 Billion, once a block is found only the last 1 Billion shares will be rewarded. While not defined anywhere explicitly, N is usually set as a multiple of the mining pool difficulty with a constant (usually 2).

Due to this, PPLNS is also called Pay Per Luck Shares. When implemented correctly, miners can’t predict the right time to join.

With PPLNS miners can either get higher rewards if they get to receive more shares within the last N shares, or get no reward at all if they didn’t.

Naturally, if you hang around a certain pool for long enough, your hits and misses should eventually even up. 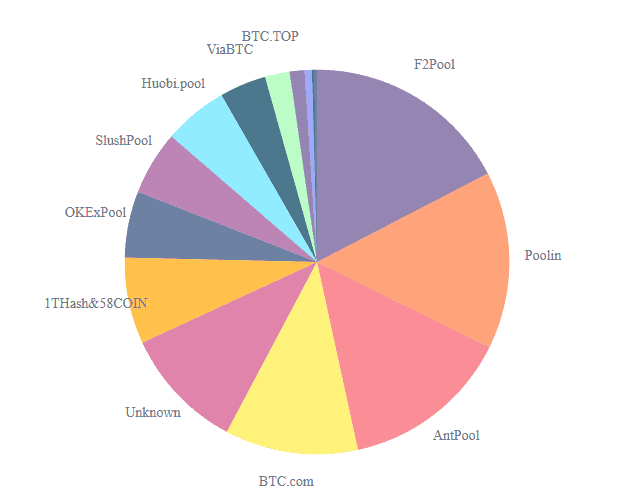 Cons: 2% fee may be too much for some people

Announced in 2010, SlushPool was the very first Bitcoin mining pool and undoubtedly led the way for many other mining pools to come.

Founded by SatoshiLabs current CEO Marek Palatinus (aka Slush), it’s based in the Czech Republic and follows a score-based system to discourage pool-hopping.

This is a medium-large sized pool. SlushPool claims a 2% fee from every block solving reward. SlushPool’s dashboard is very user friendly and provides excellent detail with regular updates.

While it may not be the largest of the Bitcoin mining pools, it’s certainly considered one of the best.

Cons: Owned by Bitmain (considered a drawback for Bitcoin maximalists)

One advantage Antpool has is that you can choose between PPLNS (0% fee) and PPS+ (4% fee from the block reward and 2% from mining fees). Payments are made once per day if the amount exceeds 0.001 Bitcoin.

Those new to Bitcoin mining will appreciate the clean interface. The dashboard clearly displays earnings and hashrates.

There are also a variety of security options, including two-factor authentication, email alerts, and wallet locks.

Known for their wallet and their own blockchain explorer, BTC.com have been around for a while, before opening a pool in 2016. Owned by Bitmain Tech, BTC.com is one of the largest pools around.

BTC.com have their own payment method, FPPS, which similar to PPS+ includes TX fees in the payouts, along with the block reward. As for mining fees, BTC.com charges 1.5% and has a 0.001 BTC payment threshold.

F2Pool is a medium-large pool established in 2013. Operating a PPS+ reward system, F2Pool takes a 2.5% fee, which is a bit on the high side.

Aside from Bitcoin, F2Pool also supports mining Litecoin (LTC), Ethereum (ETH), Zcash (ZEC), as well as other coins. There’s a daily automatic payout, and the minimum withdrawal is 0.005 BTC.

Unlike some Chinese Bitcoin mining pools, it has an English interface. The layout is quite simple, with information presented in a clear and concise manner.

With regard to payout, per each block found you will need to wait +101 block confirmations to get paid, which might take some time.

The pool’s interface could do with an update as it’s not the most user friendly. It doesn’t have much in the way of features, but it does have two-factor authentication as an extra layer of security.

Launched in 2016 and headquartered in China, ViaBTC is a medium mining pool. In addition to BTC, the pool supports LTC, BCH, ETH, ZEC and DASH mining.

ViaBTC offers both PPS (4% fee) and PPLNS (2% fee) payment methods. ViaBTC is known for being able to maintain a high uptime, more than 99.9% as of writing.

Poolin was founded by 3 former Bitmain employees and quickly became one of the world’s largest mining pools. In fact, with hundreds of blocks a month mined, Poolin is now one of the top 5 mining pools in the world.

The pool charges a 2.5% FPPS BTC mining fee. Additionally, poolin allows you to mine other coins including BCH, BSV, LTC and more.

What is the Best Miner for Bitcoin?

The best performing miner today is the Antminer S17 Pro that can reach up to 62 TH/s with a power consumption of 2790 Watts.

How do I join a Mining Pool?

Here’s how to join SlushPool:

A detailed explanation can be found here.

How Many Bitcoin can You Mine a Day?

Yes. With the right configuration Bitcoin mining is still profitable. However, you’ll need to have low electricity costs and a cool environment. You can calculate the exact profitability of Bitcoin mining with a Bitcoin mining calculator.

Remember that home mining is practically extinct and you’re up against some big player, so in most cases it won’t be worth mining if you’re not doing it professionally.

6. Conclusion – Which pool should you choose?

Joining a mining pool is the logical thing to do if you want to make money mining Bitcoin. As you can see the pools vary in size, payment methods and fees.

If you’re just starting out perhaps it would be best to join a large established mining pool in order to gain some experience. Once you feel comfortable you can optimize your earnings by choosing smaller or low-fee pools.

If you want to share your experience with one of the pools above, or tell us of a new pool, feel free to leave a comment below.