On March the 29th of 2019, the world’s leading mining hardware producer, Bitmain, officially announced the sales date of the Antminer S17.

This new ASIC miner is exclusively for coins using the SHA-256 algorithm, such as Bitcoin and Bitcoin Cash. In this review I’ll cover the miner’s pros and cons and also compare it to its competition.

The Antminer S17 is a profitable piece of hardware (at current conditions) that still yields a positive ROI when mining Bitcoins. However, as more and more companies emerge in the mining hardware market, it becomes easier to find cheaper alternatives to Bitmain if you can’t find an S17 at a decent price.

S17 miners run on the second-generation BM1397 chip. This is a 7 nanometre chip architecture which was introduced with the Antminer S15, the previous model.

Unlike the S15, the Antminer S17 represents a dramatic increase of hashing power. Compared to Antminer S15, which achieved 18 to 28 terahash per second (Th/s), depending on the operation mode, the latest Antminer S17 model boasts 50 to 56 TH/s. 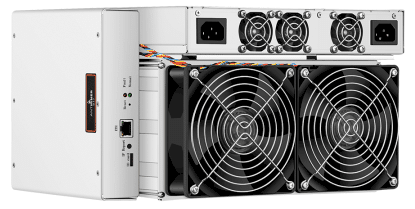 This significant leap in hashrate – roughly a doubling – is a result of significant technological advances made by Bitmain’s product development team.

While the S15’s hashpower failed to impress when measured against its rivals, this new model is a return to form for Bitmain.

As with the previous model, the Antminer S17 comes with a PSU attached to the miner’s chassis so you don’t need to buy one separately.

There is a significant difference between the standard and Pro versions of this ASIC, which is the ability to manage the power consumption of the device.

Such efficiency is the key to profitable mining, as electricity is always a miner’s major recurring expense. The Antminer S17 and S17Pro continue this successful mode-switching functionality that was first introduced with the S15.

The Antminer S17 is capable of producing anywhere between 50 and 56 TH/s, depending on the version and batch. The power consumption rates for this model range from 39.5 Joules per terahash (J/TH) up to 45 J/TH.

This works out to anywhere between 2094 – 2568 watts per hour of normal operation, although an ambient temperature above the device’s normal operating range can increase power consumption.

Heat is always the enemy of electronic efficiency, and the S17’s fans consume significant power.

Lower temperatures enable the miner to operate more efficiently, so it’s advisable for miners to create the coolest possible conditions (within reason) in which to run their mining rigs. Proper ventilation is key to prevent heat buildup.

Below you can find the overviews of the product specs, as supplied by the manufacturer:

Both batches of the S17 and S17 Pro were quickly sold out. In fact, initial sales were so enthusiastic that all units were sold within a record-breaking five minutes. Finding a good deal on the S17 may be a difficult task to accomplish or at least an expensive one.

Most second-hand Antminer S17 miners sell for an absurd price, considering the original price stated by the manufacturer. It’s safe to say that a second-hand purchase is not recommended for everybody.

The length of time that a miner takes to pay off its initial price tag and operating cost is usually the determining factor in any rational purchase decision. The longer the projected time until a miner reaches profitability, the less likely it ever will.

This is due to the ever-increasing level of competition in the mining space, which increases the mathematical difficulty of mining.

I’ve taken the Antminer 17 56Th/s specs and inserted them into our Bitcoin mining calculator, here’s what I got: 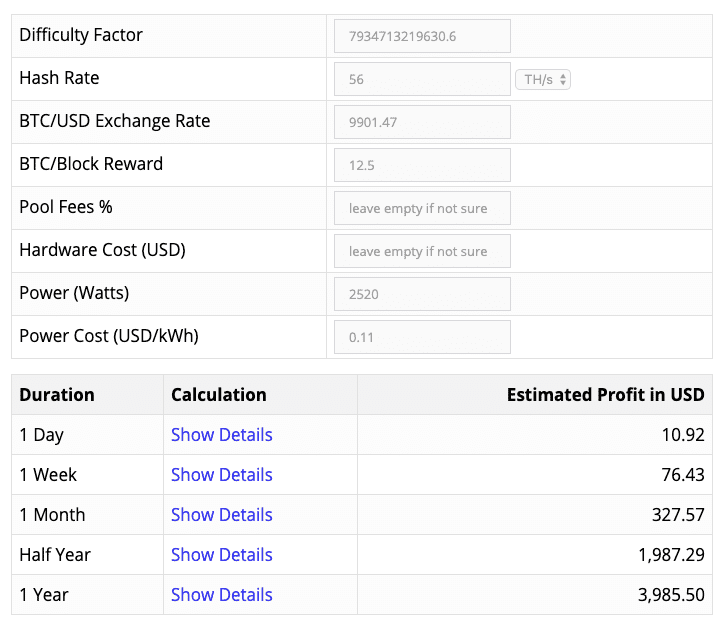 The Antminer S17 is a pretty reliable choice for miners at the time of writing. However, any volatility in the price of the cryptocurrency will impact this calculation, as well as variability in the electricity fees.

You may find yourself reading this review at a time where Bitcoin’s price or difficulty are different than what I’ve used in the example. If this is the case, use the mining calculator and run your own calculations – the price and difficulty are automatically updated.

As can be seen on the example above, the calculations indicate a period of roughly 1 year for the miner to pay itself back. However, you need to remember that these numbers are heavily influenced by the electrical fees paid by miners.

In the example above, a miner will become profitable within a year, assuming a standard power cost of $0.11. However, miners will usually locate their operations in areas with low power costs than the standard, to maximize profits. The lower your power costs, the faster you’ll reach profitability.

The most important parameter besides power cost is whether or not you’re able to get the miner directly from Bitmain. If that’s not possible, then the price of the second-hand retailer will be very important.

If you’re considering buying a used S17 or from a reseller, it would take longer to have the miner pay back its price. However, the miner is very energy-efficient, so it is expected to remain profitable for a significantly long time, particularly if Bitcoin’s price rises.

As I’ve mentioned, both batches of the S17 and S17 Pro were quickly sold out. As a way to promote individual rather than industrial-scale miners getting their hands on S17 miners, initial batches were limited to a maximum of 10 units per order.

However, it’s difficult to measure real demand from small miners, so this may have been more of a marketing tactic than a serious initiative.

Many large companies have acquired a stake in the still surprisingly lucrative mining industry, notably an Asian venture capital firm called Fundamental Labs, which invested $44 million USD into acquiring the S17 miner immediately upon its release.

There is a significant number of companies and mining farms which have already acquired this miner. Various mining farm operators have already incorporated this miner into their day-to-day operations and there is a lot of discussion about the miner in the crypto community.

However, there are some concerns in the crypto community about the competition that Bitmain is facing, which includes InnoSilicon and MicroBT.

Looking at the facts, InnoSilicon is not a real competitor, even though some individuals have been vocal about projecting a reality where InnoSilicon is a better option than Bitmain. At this time, their miners tend to be slower and less efficient.

However, there is competition to be found in MicroBT, another Chinese company based in Shenzhen. Their latest model, the Whatsminer M20S, hits an impressive 70 th/s for a low 47 J/th electrical efficiency rate, which works out to about 3360 Watts per hour.

The Antminer S17 and Antminer S17 Pro are both great choices for the professional miner, especially if bought directly from the manufacturer. Its efficiency is good and should be able to provide decent returns in the current mining environment.

Purchasing the Antminer S17 from a second-hand retailer is not advisable, mainly because of the exorbitant premium at which the machines are usually sold.

If you decide to proceed down this route, your ROI will increase by at least 2.5 months, which is a long time in this unpredictable business.

For many years, Bitmain has dominated the cryptocurrency mining industry, but Chinese competitor MicroBT might be establishing themselves as the better option.

While MicroBT’s miners are still marginally less profitable than the Antminer S17, if you are able to purchase directly from the manufacturer, you will be getting a better deal buying from MicroBT, rather than acquiring a second-hand Antminer S17.