Skip to content
You are at: Home » News » 70 Sites that Give You Free Bitcoins – Do They Actually Work ?

Let me start with the bottom line – You can’t earn a significant amount of Bitcoins using Bitcoin faucets. Most of them are scams, and those that aren’t take forever to generate a relevant amount of coins.

What are Bitcoin Faucets ?

Bitcoin faucets are website that give you free Bitcoins. The original Bitcoin faucet was operated by Gavin Anderson, Bitcoin Foundation’s chief scientist. It started out around late 2010 and it gave visitors 5 Bitcoins (yes….5 whole Bitcoins) for free. Of course back at the time Bitcoin was worth something like $0.08. Here is how the website looked back then. 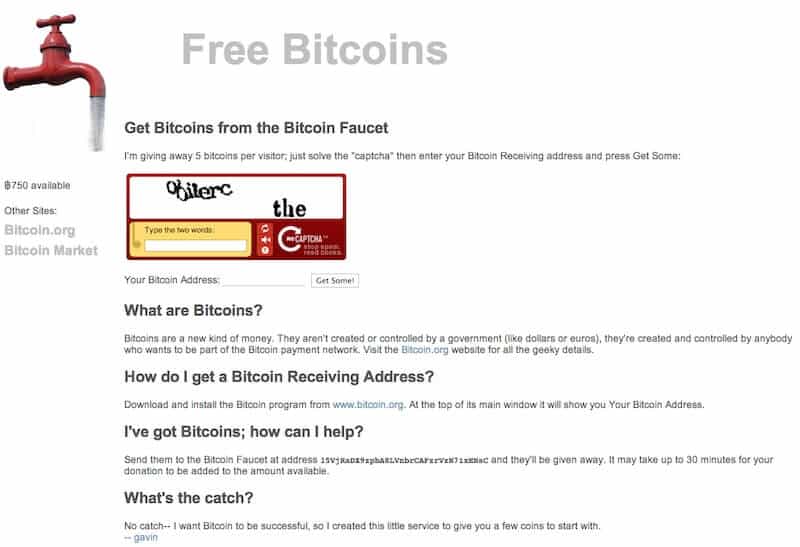 Are there reliable Bitcoin faucets out there today ?

I went  and checked out almost 10 different Bitcoin faucets (for a list of over 70 known faucets take a look at the end of this post). Of course I used an alias email account since I didn’t want to get bombarded with SPAM.

First up – FreeBitco.in – the most popular Bitcoin faucet today

The first faucet I’ve tested was FreeBitco.in. This seems to be the most popular Bitcoin faucet today with an Alexa ranking of 1,765 which is truly impressive. The website requires you to sign up with an email address. After you sign up you are led to a lottery page where you can win a certain amount of coins once an hour. But the amount of coins is so small (I won 0.00000352BTC) that you won’t even be able to transfer it to your wallet (the Bitcoin fee for such an amount is 0.0001BTC).

If this was your average payout it would take you 28 hours just to break even. 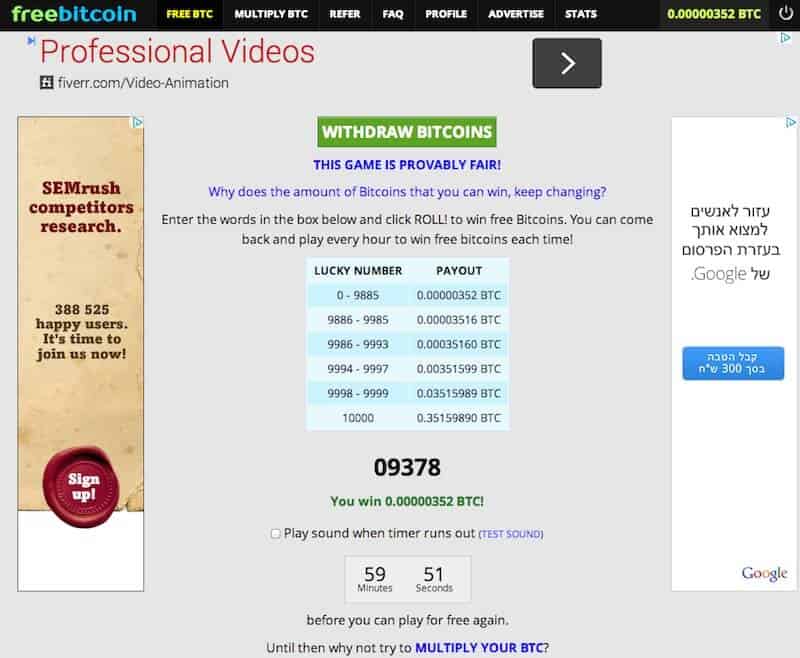 My guess is that this website is making a lot of money out of advertising since it seems to be very popular. Also it operates a referral program which lets you get more Bitcoins if you refer other people. Still, the amounts are so little that it’s not worth the time or effort.

I’ve tested around 10 different faucets and all use the same MO:

* Give you a minimal amount of Bitcoins that you won’t even be able to withdraw.

So what’s the actual deal with Bitcoin faucets ?

If you haven’t figured it out yet, there’s no way to get rich easily 🙂 Unlike the original Bitcoin faucet which aimed to help people get started with Bitcoin, today’s faucets are just website that are making money out of people who are trying to get rich for free. Here’s their recipe for success:

1. Drive massive amounts of traffic to the site by promising free Bitcoins

2. Place a disturbing amount of ads on their website

3. Hand out insignificant amount of Bitcoin so they won’t have to pay you because they know you won’t be able to withdraw the coins. There’s usually a minimal amount you need to reach in order to withdraw.

4. Keep you on the page for a certain amount of time – probably so you’ll click on of the ads and that the website will rank better on Google.

5. Make you keep coming back by promising you more Bitcoins within the hour. 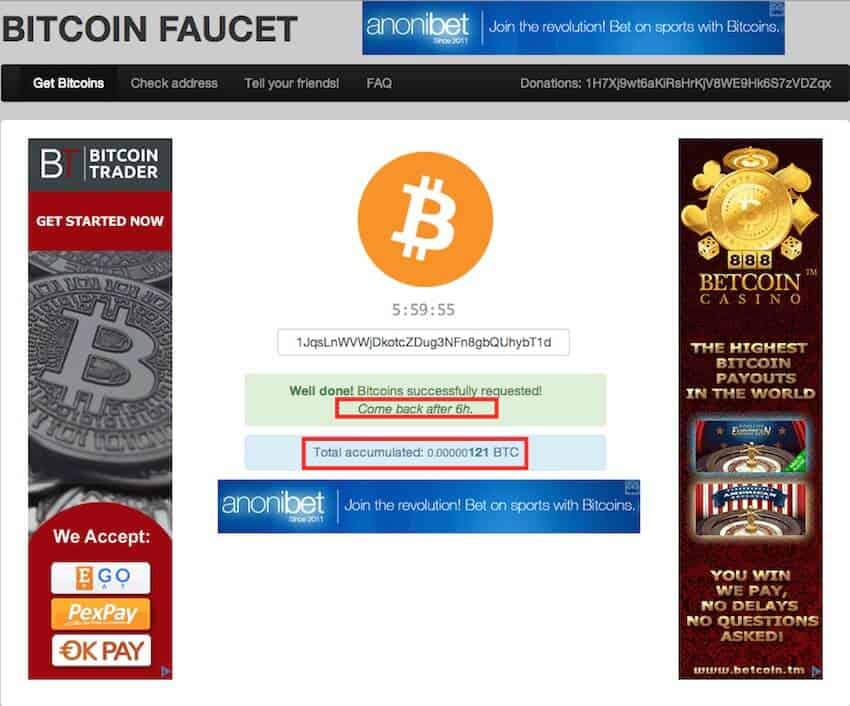 Thoughts about how Bitcoin Faucets generate even more income

Aside from making you click on ads on their website I believe that Bitcoin Faucet sites may be using additional methods to generate revenue for themselves. I have no idea if these methods are actually implemented or not, these are just my own thoughts:

Additional sites that allow you to earn Bitcoins for free

If you shy away from Bitcoin faucets there are some additional sites that will give you micro amounts of Bitcoins and seem to be a bit more legit (I did not test these site out myself).

QoinPro – QoinPro gives you a small amount of Bitcoins, Litecoins, Dogecoins and other crypto-currencies daily. Of course it won’t make you rich – I’ve been a member for a month now and I currently own 0.00000316BTC (approximately $0.001). This means that in a year os so I will have a total or 15 cents!!! Woohoo!

CoinURL – Let’s you earn Bitcoins by changing the links you put on the web to hoplinks. A hoplink is a link that moves the visitor through a 3rd party before getting him to his final destination. For example: I link to Google using CoinURL’s hoplink. If you click this link you will be taken to a gateway page which will show you an ad and only afterwards you will be forwarded to Google.

CoinAd – On the opposite end of CoinURL CoinAD allows you to earn Bitcoins for viewing ads.

CoinWorker – Allows you to earn Bitcoins by completing tasks such as filling out surveys or supplying administrative support.

Some sites I whould definitely stay away from

There are sites like Surf4Bitcoin request that you install a plugin on your browser. I highly recommend you avoid anything that asks you to install software on your computer. There have been numerous cases in which malware was installed on computers through add on promising free Bitcoins. I’m not saying that Surf4Bitcoin is a scam or anything, I’m just saying I won’t even take the risk of finding out…

30 comments on “70 Sites that Give You Free Bitcoins – Do They Actually Work ?”