This is the Coin Brief weekly Bitcoin price report for the week of October 12-October 18, 2014. This week was characterized by steady gains that persisted throughout the entire week, except for a few days of bearish activity. Overall, throughout the duration of the week, the Bitcoin price increased by 8.86%. 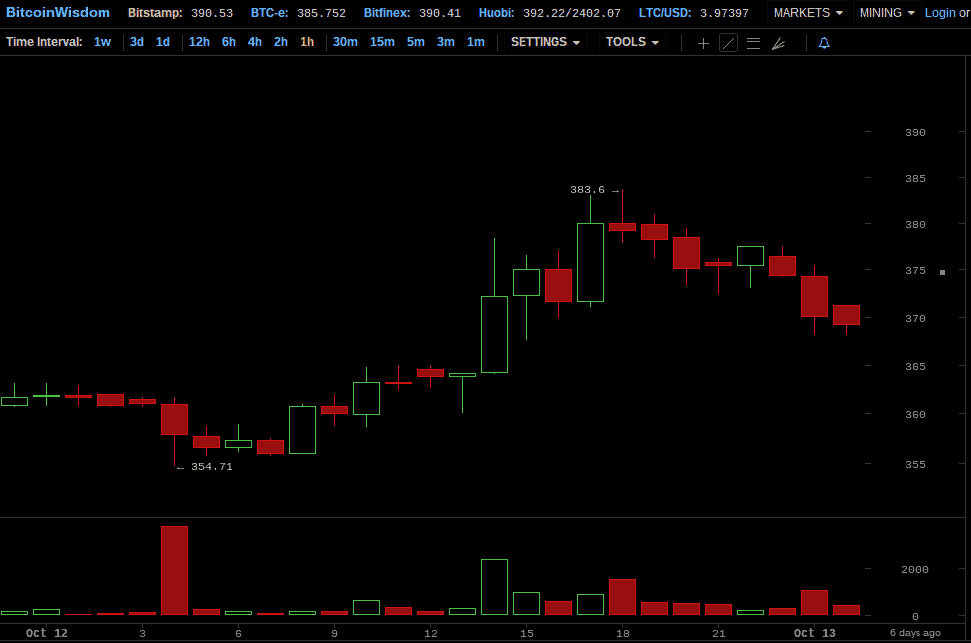 Sunday, October 12, 2014 would continue the upward momentum that was established last week in the aftermath of the BearWhale’s sell wall at $300. The day opened at $361, stayed flat for the first few hours of the morning, dropped slightly into the $350s at 4 AM, and then began climbing at 8 AM. The Bitcoin price climbed continuously until 5 PM, with the price at $380 at the close of the hour. After 5 PM, the price fell for the rest of the day. October 12 ended at $374 — still up from the start of the day, but down from the 5 PM peak. 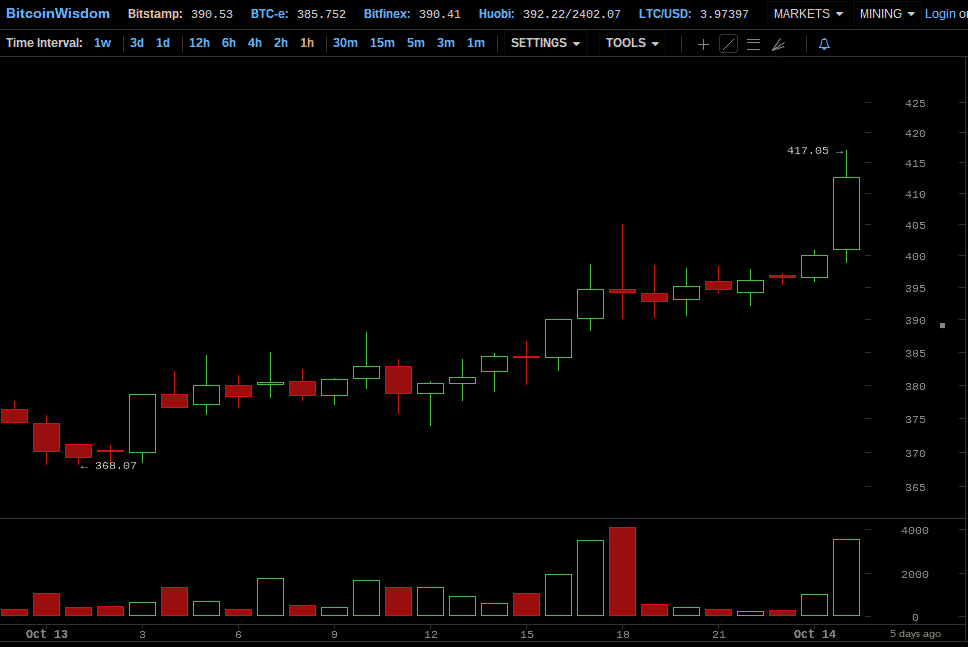 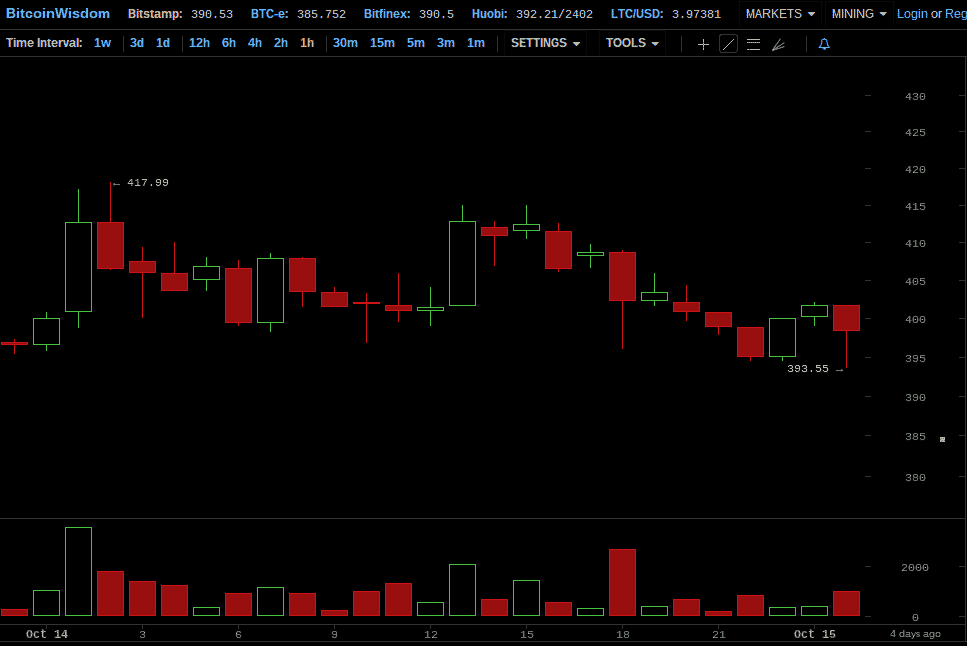 The Bitcoin price activity followed no distinct pattern on October 14. Starting at $396 — 5.88% higher than the opening price on the 13th — the day kicked off on the decline. The price fell, albeit very slightly, until midday and then began increasing. At 1 PM, the price jumped up from $401 at the top of the hour to $412 at the bottom of the hour. The price began falling again at 4 PM and declined for the rest of the day; the 14th closed at $401. 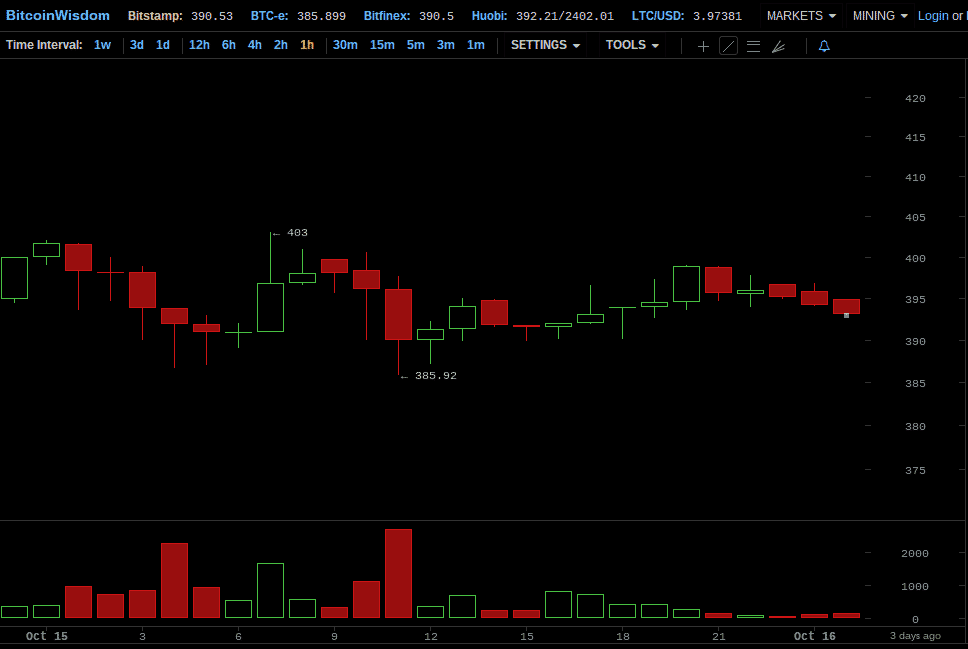 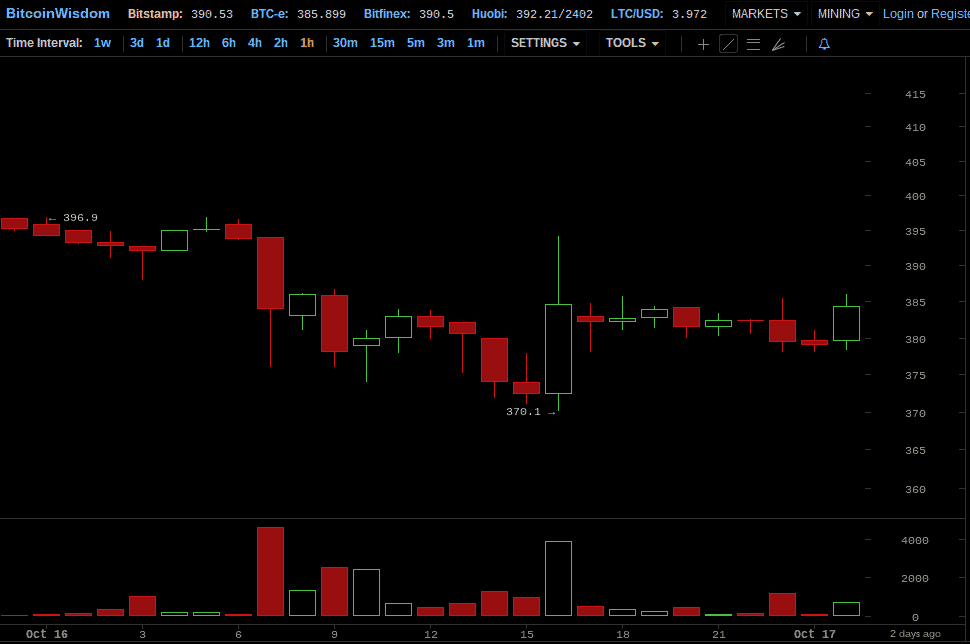 The 16th of October began at $396, a 1.25% decline from the opening price on October 15. This day was decidedly bearish, with gradual declines in the early morning and evening and some fairly volatile activity in later morning hours all the way through the afternoon. The major Bitcoin price activity began at 7 AM, when the price fell from $394 at the top of the hour to $384 at the bottom of the hour. The price continued falling until 3 PM, where it fell to $372 at the bottom of the hour. Then, at 4 PM, the price jumped back into the $380s. Throughout the remainder of the day, the price stayed between the high $370s and low-to-mid $380s. The 16th of October ended at $380.

This day opened up with the Bitcoin price at $380, a 4.04% decline from the start of the previous day. Despite some very small fluctuations throughout the day, the price activity as a whole was flat. The day closed at $381, an overall increase of $1. 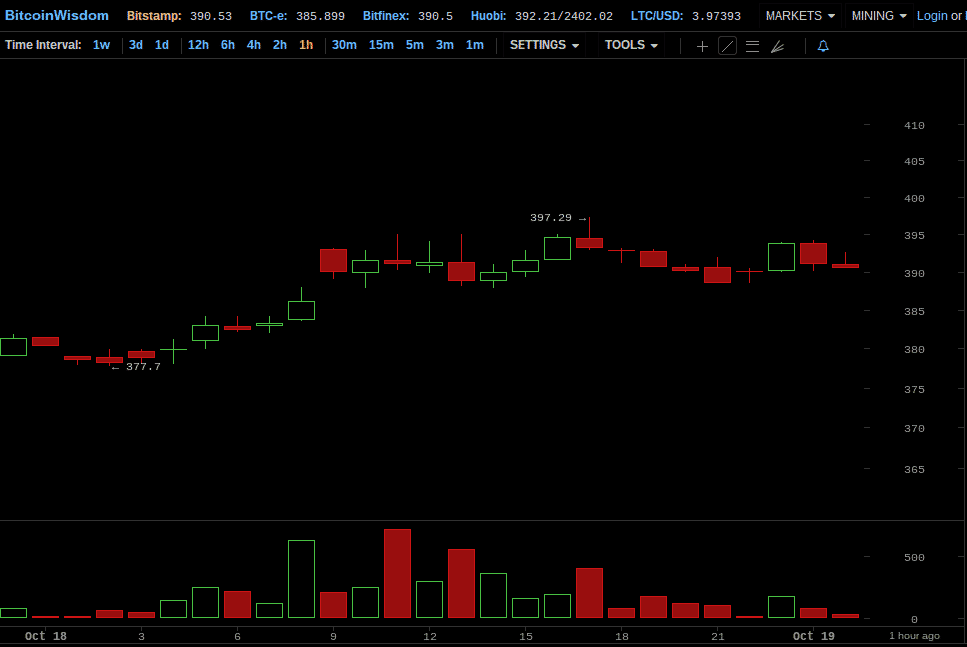 Saturday opened at $381, a meager 0.26% increase from the start of the previous day. The first part of the day, from the morning through the 4 PM hour, was characterized by slight but steady gains. by the bottom of the 4 PM hour, the price had climbed to $394. After 4 PM, though, the Bitcoin price leveled out and stayed flat for the rest of the day. The day closed out at $393, a 3.15% increase from the beginning of the day. The overall, weekly change in the Bitcoin price amounted to an 8.86% increase.

Last week, we gave two possibilities for the future Bitcoin price activity. First, we said that the price would continue rising and the community rode the wave of excitement that the BearWhale stirred up. Second, we forecasted that the upward pressure created by the BearWhale excitement would be temporary, and we would either see the price fall or remain level, awaiting a decline at a date beyond our weekly forecast. The former prediction proved to be correct. In the aftermath of the BearWhale, the markets calmed down considerably while maintaining the upward price trajectory that was set in motion last week.

As for the coming week. we will say that the price will continue to move upward — ceteris paribus (all things remaining equal), of course.