This is the Coin Brief weekly Bitcoin price report for the week of November 2-November 8, 2014. This week was bearish overall, climbing out of the mid $320s and reaching the $340s towards the end of the week. Overall, the Bitcoin price rose by 5.52% this week. 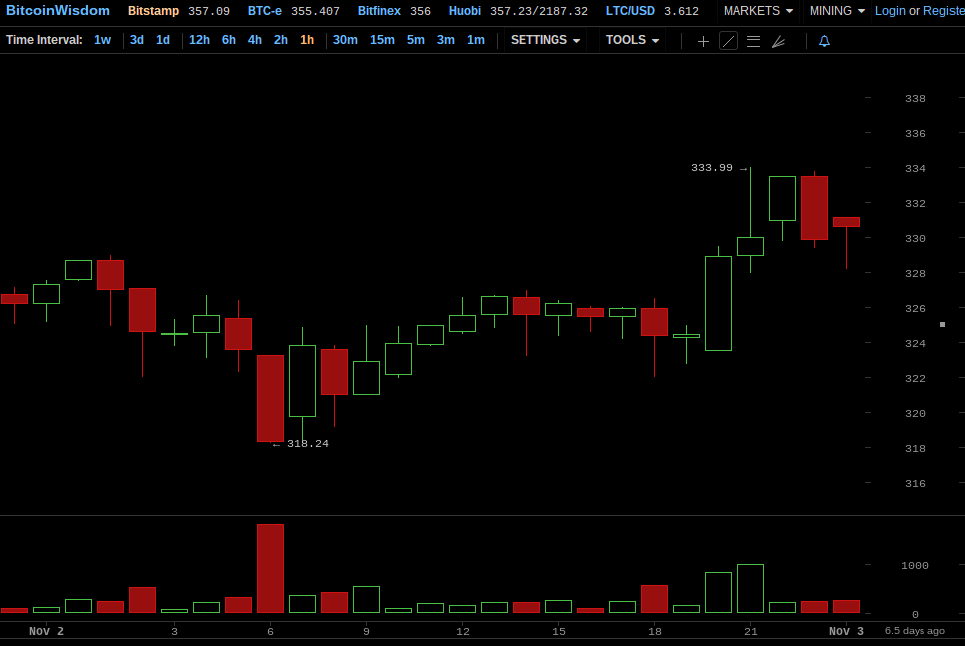 The Bitcoin price activity was fairly sideways on November 2. Opening at $326, the price began sliding downwards at 1 AM, which bottomed out at 6 AM. Afterwards, the price began moving upwards again, and almost fully returned to the level that persisted before the drop in the early morning — thus almost completely cancelling out that drop. The Bitcoin price remained relatively flat until 8 PM, when it jumped upwards. The daily peak was reached at 9 PM; at some point during the 9 PM hour the price hit $333.99. The sudden increase topped out at 10 PM, with the price at $333 by the bottom of the hour. Then, the price dropped to $331 at midnight, closing out the day. 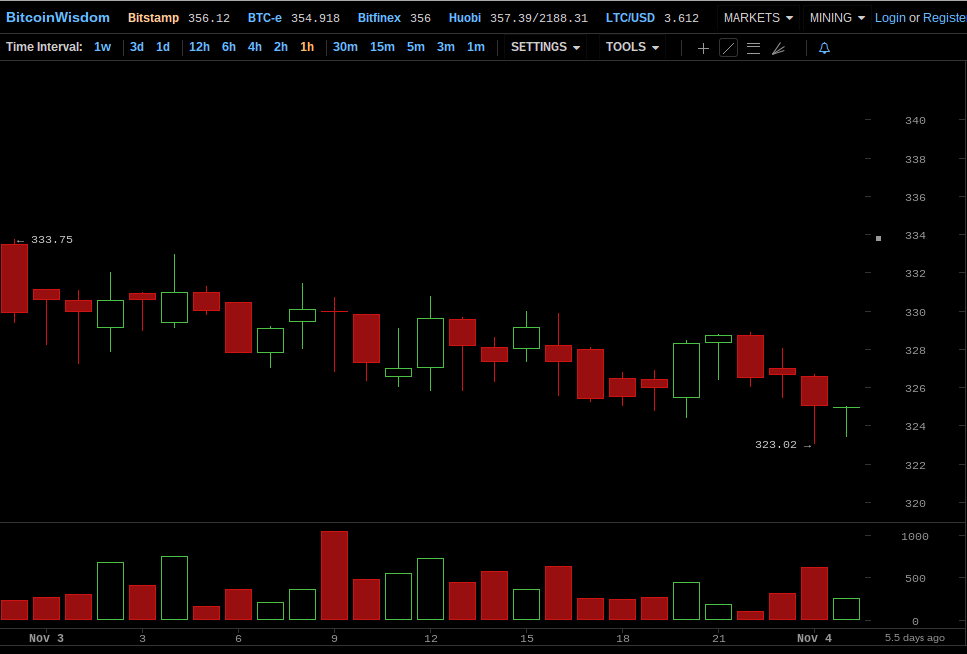 Monday, November 3, began at $331 — a 1.53% increase over the opening price for the 2nd. This day was bearish in terms of Bitcoin price activity; the price declined all day, with the downward slope being very slight. Without any significant spikes or movements in the market, the 3rd closed at $327. 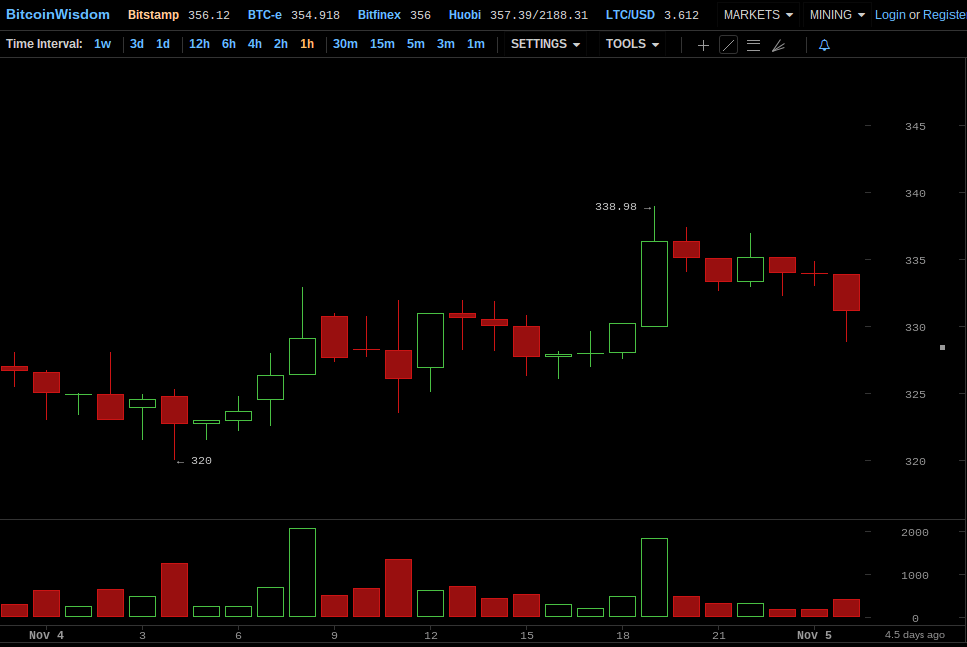 Opening at $327 — a 1.21% decline from the start of the previous day — the 4th of November would prove to be a much more active and bullish day than the 3rd. There were some relatively smooth fluctuations that were spread over the duration of the day, gradually moving back into the $330s and then sliding back down into the high $320s. However, at 7 PM, the Bitcoin price made a quick, upwards leap. By the bottom of the hour, the price had risen to $336. After this small spike, the price declined slightly, until the day closed out at $334. 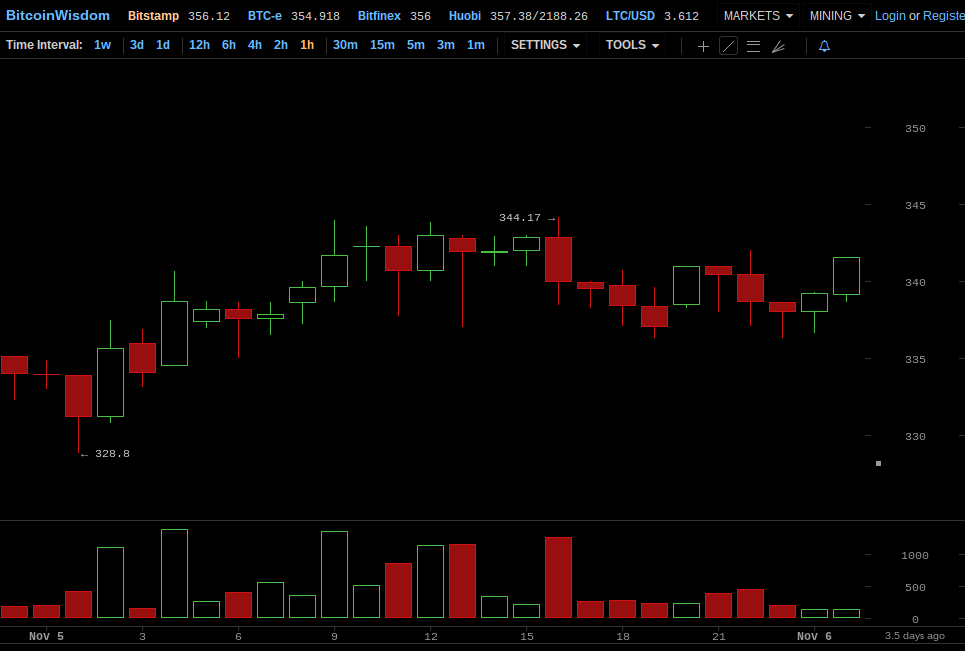 Wednesday, November 5, began at $334, a 2.14% increase over the opening price for the previous day. The Bitcoin price made it into the $340s in the morning hours, and stayed there through the afternoon. Starting at 4 PM, though, the price began falling, and was at $338 by end of the day. 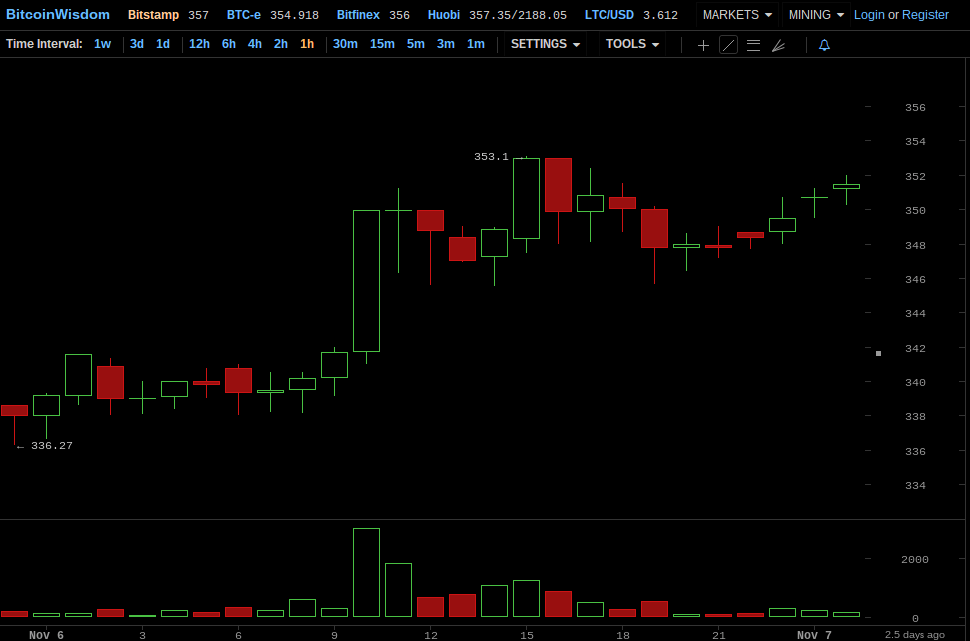 The 6th of November began at $338, a 1.20% increase from the start of the 5th. The Bitcoin price remained very flat for the first part of the morning. Then, at 10 AM, the price shot upwards; the price was at $342 at the top of the hour, and had hit $349 by the close. After this spike, the price continued to rise for the rest of the day. A daily peak of $353.1 was reached at some point during the 4 PM hour. After a brief drop into the high $340s during the evening hours, the Bitcoin price returned to the $350s at the end of the day, closing out the 6th at $351. 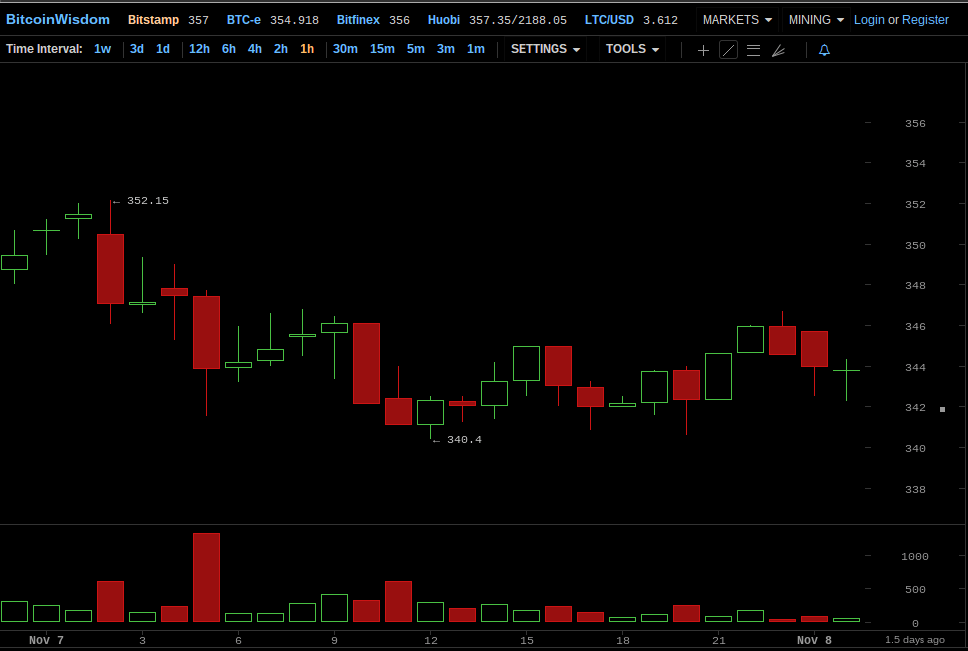 November 7 opened at $351 — a commendable 3.85% gain over the opening price for November 6. The bullish momentum generated on the 6th did not carry over, though, and the Bitcoin price began falling almost as soon as the day began. The price fell all day, with some up-and-down fluctuations occurring throughout the decline. The day ended at $346. 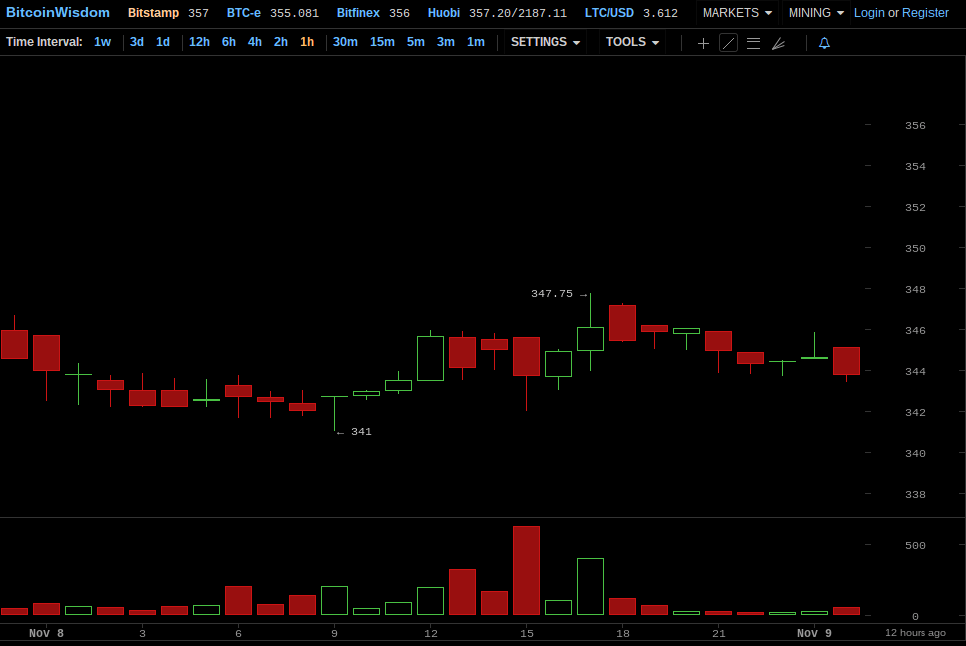 Saturday, November 8, began at $346 — down 1.42% from the start of the previous day. After the bearish activity on the 7th, the Bitcoin price remained relatively flat for the entirety of the 8th. The day ended with the price sitting at $344, a 0.59% drop from the opening price for the day.

Last week, we predicted that, all things remaining equal, the Bitcoin price would follow the bearish trend of the week and continue falling — likely going below $320. That prediction did not come true, and this week was bullish overall; this week’s Bitcoin price activity meets the requirements for a deviation from the bearish movement, which we laid out last week. We said that the direction the price trajectory would move away from last week’s bearish path if there was a swift change in market valuations. Clearly, that is what played out in reality. Additionally, it appears that, for the last 3 or 4 weeks, our ceteris paribus forecasts have not been as accurate as they usually are, signifying fluctuating valuations. These rapidly shifting valuations — constantly fluctuating between a positive and negative valuation of Bitcoin — indicates that the market is struggling to find a “comfortable” price, at which a general trend can be established.

Therefore, we cannot say that the price will move in any, definite direction in the coming week. Since the market is looking for a relatively stable valuation, from which the next short-term trend can launch, all we can say is that — ceteris paribus (all things remaining equal) — the Bitcoin price will fluctuate between bearish, bullish, or relatively neutral movements.