Skip to content
You are at: Home » News » Adoption » Understanding micropayments and Bitcoin’s role

One of the most prominent benefits of using Bitcoin is being able to send money across the world without any hassle, from as little as one cent to as much as millions. Most traditional financial services are limited when it comes to sending micropayments or large payments with huge fees attached to them, but Bitcoin is very different. 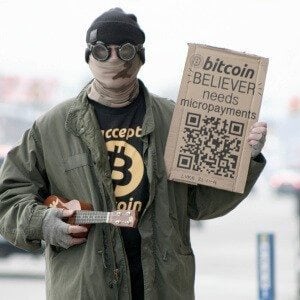 The internet has allowed all of us to be connected in real time. However, (look at the image on the right) before Bitcoin helping this ‘Bitcoin believer’ wouldn’t be feasible or convenient. So how connected were we in reality before cryptocurrency?

Most of the world’s population lives with less than $2.5 per day. These people are truly affected by the way, the remittance market operates, as it’s impossible for them to send or receive small payments. This is a real barrier in the developing world, where even a single dollar can make a big difference.

Also, take the example of the advantages of micropayments for non-profit and charitable causes. Being able to send a dollar or less than a dollar to someone allows for more people to contribute, helping to eliminate poverty and diseases in the distant corners of the world.

[tweet_box design=”box_02″]Micropayments will empower every single one of us to make a change, no matter how little we have.[/tweet_box]

The current problem with micropayments

The biggest problem associated with sending micropayments is the fee that is deducted by the intermediaries, but that problem can be minimized now thanks to Bitcoin. However, even cryptocurrency in its current form does not completely allow for micropayments to be sent on regular intervals. The problem is that most of the companies that allow for microtransactions to be made do not post them on the blockchain for public access. They use internal managing systems to keep track of these transactions.

The blockchain being the cornerstone of Bitcoin, users need to be able to rely on its security and transparency. The major reasons companies cite for not using the blockchain is its limited size and the fact that micro transactions bloat the system. They also claim that fees are higher for micropayments and the standard block confirmation time can make micro transactions very slow.

One of the possible solutions was released in the form of an API by BlockCypher, the API allows for micro transactions to take place on the blockchain. They have tackled the problem by using an adaptive method to calculate fees.

They add a suitable fee to each transaction so that it is feasible for the miners to confirm the transaction instead of delaying it.

They have also devised a system that they like to call ‘confidence factor’, which is able to predict with up to 99.9 percent accuracy which micro transactions will be confirmed, helping them to calculate and pay the miners’ fees.  This in result allows for people to receive the exact amount that is sent.

The transactions can be viewed and monitored using any block explorer.

Micropayments are huge when it comes to online businesses, mainly the ones with a large amount of traffic like news sites and blogs. The monetization of such traffic becomes easier with micropayments.

There was even an experiment done by the Chicago Sun-Times in collaboration with BitWall to see if people would pay micro amounts in BTC to view content on the site. The experiment showed that people are willing to pay for access to content using cryptocurrency. This shows that digital money-powered content monetization has a huge potential.

The other great use for micropayments is to pay for streaming websites that can charge a small amount to viewers for streaming content, thus helping artists monetize their music, for instance. In fact, Shopify calculates royalty payments for artists by paying a fraction of a cent per stream.

The reason for the decline of the music industry is not just because people don’t want to pay for music, but because there aren’t many affordable and efficient ways to pay for it. People want to pay what they think the content is worth, even if that is one cent per song. A crypto-approach to this problem would allow upcoming artists and musicians to monetize their content.

Another industry that can make good use of micropayments is online advertisement. Before Bitcoin it wasn’t feasible to charge per impression – the minimum charge was usually for 1000 impressions on most advertising sites – and that is why this huge industry needs to take a step forward using cryptocurrency.

A lot of new incentive-based models can now be introduced online where people can pay to play games, read content, give surveys and what not.

The possible prospects for content creators are limitless. With a growing number of internet users, each user counts and being able to charge even a fraction of a cent per user/action is going to be profitable in the long run.

Just recently, a company named Zapchain introduced a content monetization model where users can earn Bitcoin by creating content. The service also allows people to tip each other based on questions asked or answers given within the community.

Even Adam Draper, CEO of Boost.vc, agrees. “Microtransactions might be a new way for web content creators to make money. It could be a game changer,” he said.

Micropayments also have the capacity to put an end to many of the problems the internet currently faces, like spamming. In the future, some of the services that are free – and constantly attacked by spam, like emails – could be replaced by making use of micropayments.

Paying a fraction of a cent for an email wouldn’t bother most people, but for the spammers it would totally be a deal breaker.

Micropayments definitely have a huge role to play in the future, but how things will change because of this transition is not clear. In any case, in order for micropayments to prevail, adoption of cryptocurrencies needs to increase and that is only going to happen when people understand the possible applications and prospect that this technology offers.