One is located in Russia, Europe, and the other one in Pennsylvania, United States. These two Subway shops might be separated by lots and lots of miles, but they surely have one big thing in common: both accept Bitcoin for their fresh sandwiches.

The number of products you can currently buy with Bitcoin is getting bigger every day. The Russian store is located in Moscow, according to Coindesk, and it was probably the first Subway shop in the world to accept cryptocurrency as a form of payment. Besides, the establishment is even offering a 10 percent discount for customers who pay with digital coin.

The great news was made public when the Bitcoin software developer Alberto Gomez Toribio published a photo, on November 3, of the Moscow-based establishment on Twitter. 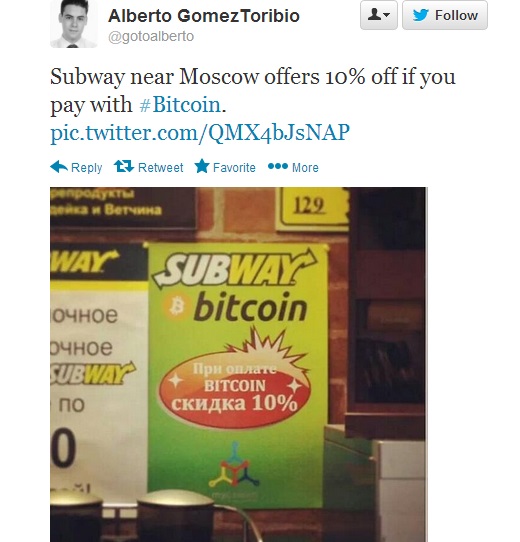 Apparently, the shop is processing the Bitcoin payments through Mycelium, a mobile system presented at the Bitcoin 2013 conference in May.

Anyway, it’s important to remember that Subway sandwich shops are franchises and not directly managed by the brand, which means this was probably an initiative of the owner or manager. However, our bet is that such a change would still require corporate approval, so could Subway be looking into cryptocurrency as an opportunity?

In the meantime, another Subway shop, this time in Allentown, Pennsylvania, also started accepting cryptocurrency. The news is being a success at Reddit, where a user recently talked about his experience as the second customer paying with Bitcoin at the restaurant, located at 3337 Hamilton Blvd.