Skip to content
You are at: Home » News » Startups » You can now tip musicians with Bitcoin on SoundCloud thanks to ChangeTip

ChangeTip launched a new tipping feature on SoundCloud that allows the users of the online audio distribution platform to tip musicians using Bitcoin. 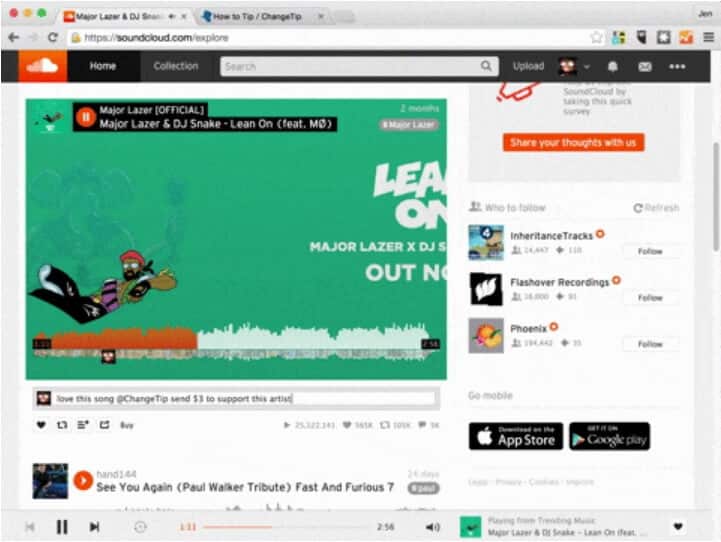 The feature works thanks to the company’s Tip.Me widget, which generates a button embeddable onto sites and allows online-friendly content producers to accept Bitcoin tips.

The cryptocurrency startup believes this new tipping option is a unique and exciting way to compensate artists. “It’s easier than ever to support local talent, instantly delivering your donations into their account,” reads a statement shared by ChangeTip this Wednesday (13th).

“Artists can use ChangeTip to consistently connect with fans on SoundCloud, live events, and social channels, and fans now have new ways to appreciate and support their favorite musicians from anywhere in the world.”

This is just another step towards ChangeTip’s ultimate goal: to become the biggest platform dedicated to the exchange of micro-payments in the digital universe.

While that doesn’t happen, the startup will keep spreading awareness about Bitcoin and digital money by allowing tippers to donate small amounts of money to content producers over Twitter and now via SoundCloud.

“Now people can actually reward content that they really appreciate, and it will go directly to the individual, rather than to the label or to an intermediary,” says Kyle Kemper, ChangeTip’s head of tipping. “We are creating a new channel for fans to engage with artists, and for artists to engage with fans. And beyond SoundCloud, with the ChangeTip platform any musicians can accept donations over Twitter and on their own websites.”

If you already have a ChangeTip account, simply connect to SoundCloud on ChangeTip’s how to tip section or within your settings. If you are new to ChangeTip, you can sign up using your SoundCloud account.