Skip to content
You are at: Home » News » Adoption » Three new Robocoin ATMs arrive in the United Kingdom

London has turned into one of the cities in the world leading the recent Bitcoin ATM fever thanks to a new UK-based startup called SatoshiPoint. These machines will allow the public to buy and sell digital coins in exchange for fiat currency.

The company is launching a couple of crypto ATMs in the British capital in partnership with the American manufacturer Robocoin. Two devices are being installed in the meantime and will be live from May 30th, during next week.

SatoshiPoint is even planning an official launch party to mark the occasion, according to the Bitcoin Magazine. The event, organised in collaboration with Bitcoin POS XBTerminal, will occur on the same day (next Friday), starting from 6pm, at the Old Street Tube location Nincomsoup.

There will also be a second party on a different date, this one to celebrate the launching of Bristol’s first Bitcoin ATM, which will be activated on June 3rd.

And this is just the beginning of SatoshiPoint’s plan, as the company plans to buy more Robocoin machines and install them in the United Kingdom. The startup’s machines, whose Bitcoin price is based on Bitstamp’s value, will charge a 5 percent fee. However, SatoshiPoint has revealed that it might swap exchanges and start working with Cointrader in order to provide faster withdrawals. 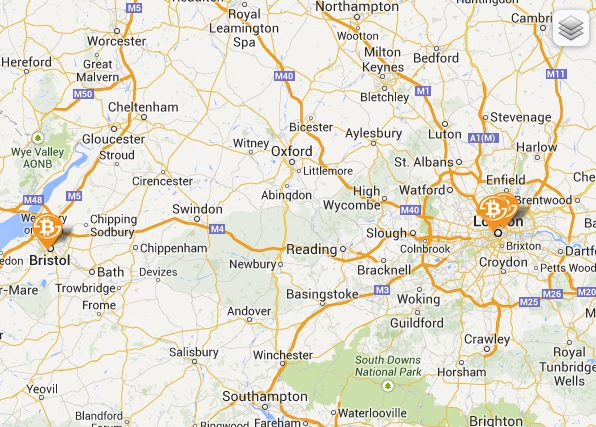 These first two London-based machines can be found at Old Street’s Nincomsoup and near Oxford Street. The one in Bristol will be installed in St. Stephens Street.