The article talks about the world’s most famous digital currency, listing its pros and cons such as its ability to transform the financial system and its volatility respectively. The latter is a huge weakness, according to the Stockholm-based financial group that serves almost five million companies, institutions and private customers. 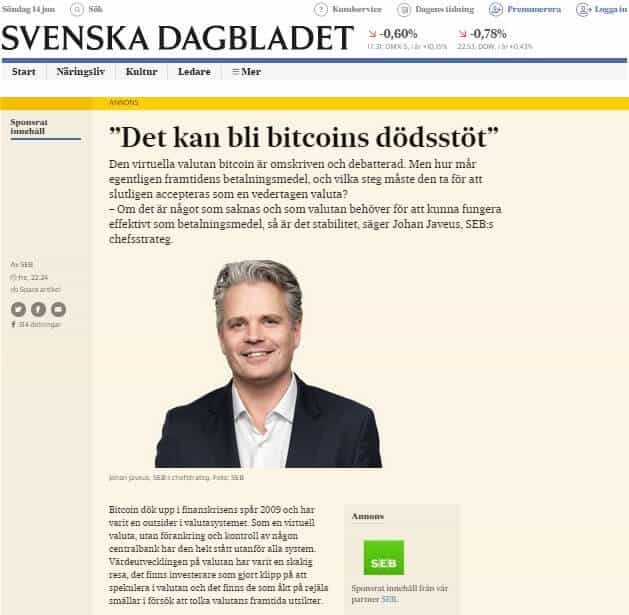 SEB, which is controlled by the Swedish Wallenberg family, reveals in the article that Bitcoin needs stability and regulation.

“If there is something missing that cryptocurrency needs to function effectively as a means of payment, it’s stability,” says Johan Javeus, the bank’s chief strategist. Also, the digital currency has legally existed “outside all systems” despite its encounters with the law in countries like Russia or the United States, the representative adds.

Nevertheless, the problems listed by SEB don’t stop here. “The essence of the currency’s popularity is that it is anonymous and untraceable. It can also be one of the biggest disadvantages of the currency’s future,” Javeus explains. “There is a problem when there is no Governor acting as an anchor to a currency, to ensure stability.”

“To use a currency to buy goods and services, you must be able to trust that the currency keeps its value. Bitcoin has been subject to enormous fluctuations, up and down. It is also important for enforcement authorities, so that the currency isn’t used for money laundering or drug deals.”

However, Javeus also recognizes that Bitcoin has simplified transactions and money transfers on a global level, making these operations easier and quicker.

Still, and although the article refers the bank’s “resilience and flexibility to adapt”, we’re probably not going to see SEB adopting Bitcoin-friendly practices in the near future.

The bank, founded in 1856 by the country’s first venture capitalist André Oscar Wallenberg, has been around for more than 150 years and was Sweden’s first private bank.