Coindesk has reported that they have been in contact with a representative from the US Marshals, who has given them an update on the results of the Silk Road Bitcoin auction. Last week, the US Marshals facilitated an auction of the bitcoins seized in the Silk Road bust of late 2013. In this auction, approximately 30 thousands bitcoins were sold off to the highest bidder. Since the auction was a sealed– meaning that bids were submitted privately– no one knows how large the bids were or who has won the bitcoins. However, the Bitcoin community is patiently waiting for this information to be released at some point today.

According to the US Marshals representative that conversed with Coindesk, there were 45 people who participated in the auction and 63 bids were placed overall. Although that was all the representative disclosed, the agency says that more information could be released in the very near future; the Marshals have not decided how much information regarding the winners of the auction and the bidding prices they will release, however.

From the US Marshals:

“The award process is ongoing, so we do not have the final number of winning bidders yet.”

While the height of the bids and the winner(s) of the auction remain unknown, we still know of many of the names that participated in this Bitcoin auction. The names of approximately 40 potential bidders were accidentally leaked by the Marshals around two weeks ago, and several of the people on this list confirmed their intent to participate in the auction. SecondMarket is a fairly large Bitcoin company that confirmed their place in the auction. The company also allowed some of their customers to indirectly participate in the auction, allowing them to contribute between $25 thousand and $50 thousand to an aggregate bid that was submitted by SecondMarket to the US Marshals. More recently, today to be more specific, The Wallstreet Journal reported that another large Bitcoin company, Circle, threw their hat into the ring and placed a bid for the Silk Road bitcoins. Other names on the list of confirmed bidders include Bitcoin Investment Trust (BIT), BitFury investor Binary Financial, Pantera Capital, and Bitcoin Shop.

Implications of the Silk Road Auction on the Bitcoin Price

Given the names of several of the confirmed bidders in the Silk Road auction, we are equipped with more information with which to better analyze the implications this auction will have on the Bitcoin price. Several of the names listed above are businesses that deal with the buying and selling of Bitcoin or provide Bitcoin-related services. With this information, we can say with a fair degree of certainty that these companies want these bitcoins to either improve their services, or to hold them as an investment. The latter is most definitely the case with the Bitcoin Investment Trust and Binary Financial. Therefore, it is reasonable to say that it is very likely that the winner(s), given that they are Bitcoin companies, will either invest their winnings in the improvement of their services, which would be a gain for the Bitcoin community and would lead to an increase in the Bitcoin value, or will hold the coins as an investment. Holding the coins as an investment would obviously keep them off the market, thereby avoiding a sudden increase in the supply and the subsequent drop in the Bitcoin price.

There is, however, a chance that the winner, or some of the winners, participated in the auction with the intent of grabbing the bitcoins below the market price and then profiting by selling them at the market rate on an exchange. In this case, the Bitcoin price would undoubtedly drop. The extent of this price drop would of course depend on the amount of bitcoins actually dumped on the exchanges. This scenario has been the point of debate in the Bitcoin community, and with good reason; whether or not the Silk Road bitcoins were auctioned off above or below the market price is the most important factor in determining the immediate future of the Bitcoin price.

Indeed, the sideways trend did persist during the run-up to the Silk Road auction, and a small deviation from that trend occurred a few days before the auction. The Bitcoin price then recovered from that downward deviation and returned to the $580-$600 range on the day of the auction. The market, therefore, proved Citi Group’s prediction very wrong; they predicted that the Bitcoin price would crash into the ground during the auction. Clearly that was not the case. Then, last night, the Bitcoin price finally broke through the $600 barrier that was established a few weeks ago, shooting upward into the $620s. This Bitcoin price increase coincides with my statement that the price could embark on an upward climb in anticipation of good news from the winner(s) of the Silk Road auction. 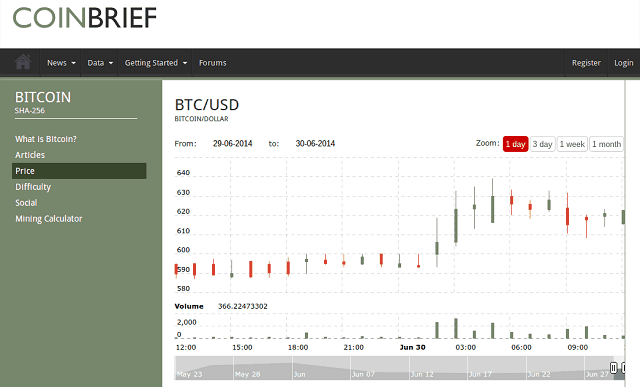