FREE BITCOIN CRASH COURSE
Enjoyed by over 100,000 students. One email a day, 7 Days in a row. Short and educational, guaranteed!
You are at: Home » News » Satoshi Nakamoto could be elected The Guardian’s Person of the Year 2013 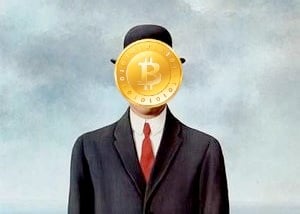 The newspaper The Guardian is organizing a new edition of its Person of the Year election and there’s a familiar name among the candidates: Satoshi Nakamoto, Bitcoin’s creator. The list has only eight personalities, suggested by the newspaper’s writers, but the readers can still submit their proposals.

The group of nominees is mainly composed of people that made the news during the year and were relevant in their fields. In this case, Satoshi Nakamoto, the still anonymous “father” of cryptocurrency, was nominated by Charles Arthur, The Guardian’s technology editor:

Nobody knows who she or he is, nor even whether s/he is a single person or a group (though the latter seems unlikely). The pseudonymous Japanese name is a fake. But that is the given name of the inventor of Bitcoin, the digital currency that has gone from a nerd’s delight in 2009 to something taken seriously by central bankers in 2013, and whose notional value passed $1,000 a “coin” in November.

(…) Given all the internet sleuthing that has gone on, it’s unlikely that a duo or group could have kept secret for this long how they devised the cryptographic protocols, peer-to-peer systems, and economic model that underlies Bitcoin. Someone would have cracked, whispered or cashed in; which points to Nakamoto being a lone operator.

(…) It’s widely believed that Nakamoto has a huge hoard of Bitcoins created back at the currency’s dawn, which could now be cashed in for vast amounts. But again, there’s no proof. All we have is Nakamoto’s original 2008 paper – and Bitcoin. 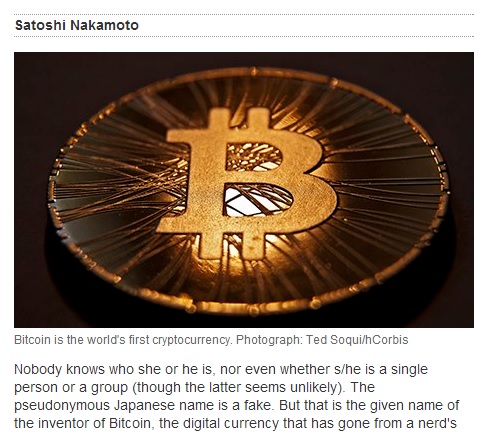 According to The Guardian, “Bitcoin shows huge promise as real ‘digital cash’ for the internet”. Charles Arthur writes that the “central bankers are looking at it seriously. With the internet seeping into everything we do, the need for a really digital currency is becoming increasingly urgent“.