Skip to content
You are at: Home » News » Satoshi Forest welcomes its first bitHouse

The nine-acre sanctuary for the homeless known as Satoshi Forest, located in Pensacola (Florida, United States), received its first bitHouse, which is already assembled and ready to become a home.

The charity group Sean’s Outpost announced the good news via the Bitcoin sub-Reddit, publishing a picture of the new home that will welcome someone previously living on the streets. 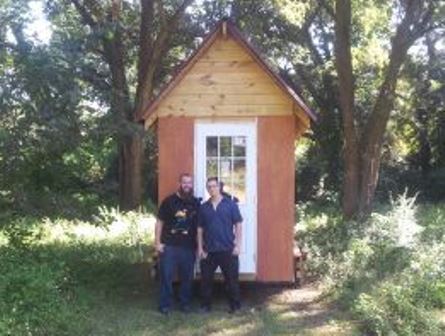 For the more distracted Bitcoiners, the Pensacola Homeless Outreach is an organization supported by Bitcoin donations that helps people in need with food and a place to stay.

Since it’s illegal to sleep on the streets of some North-American cities, the Satoshi Forest – which is private land – provides a free and safe place where the homeless can stay with worrying about the authorities. Now, with the first bitHouses arriving, the living conditions are about to improve a lot, all with the help of the Bitcoin users around the world.