Skip to content
You are at: Home » News » Research to develop promising anti-cancer compound grows thanks to Bitcoin donations

The Bitcoin community can now support an amazing project with a noble goal: to effectively fight or even cure cancer. Isaac Yonemoto, a chemist and recreational programmer, is the man behind the project that intends to bring the research project 9-deoxysibiromycin (9-DS) back to life.

Yonemoto has recently relaunched the patent-free program online, turning it into a crowdfunded project that accepts Bitcoin donations. The chemist wants to raise both digital money and fiat currency to keep developing the anti-cancer compound called 9-DS, a promising substance that could provide a treatment for melanoma, kidney cancer, and breast cancer according to early tests. Due to various reasons, the project was abandoned several years ago, Wired reports.

“Here we have this abandonware compound and open-sourcing is a way of resurrecting abandonware”, Yonemoto says. 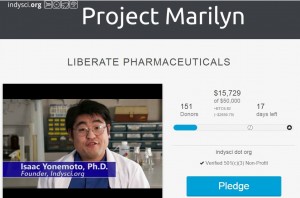 The researcher launched the crowdfunding campaign – called Project Marilyn – last week on his website Indysci.org and is asking for $50,000, the amount he needs to proceed to the animal testing phase. He wants to test the compound on mice and has already received $12,000 from generous followers. About $2,000 of that amount comes from cryptocurrency donations.

The website can be seen as a kickstarter platform dedicated to spread the word about the open scientific research, where the chemist promises to publish all the obtained data openly. “When Salk and Sabin cured polio, they didn’t patent the vaccine. It’s time to develop a patent-free anticancer drug for the 21st century”, reads the project’s online page.

Like the pharmaceutical industry today, the software industry was historically dominated by big companies and proprietary code bases. Today, the most widely used operating system on the planet – Android – is open source. Anyone can copy and custom tailor the code to meet a specific needs or improve the code base for the entire community. As you explore the web, you will see content and services delivered by or made possible by open source projects like Linux, Wikipedia, WordPress, etc.

Yonemoto plans to publish the obtained data through a decentralized server, most likely GitHub. He believes the current way research is done is the result of a mix between biology and computer science. “Biology is becoming more like a computer science discipline”, he adds.

Besides the testing stage (in other words, a xenograft study), Project Marilyn will also involve the production of more 9-DS. These are the two essential steps that might allow the project to eventually reach the clinical studies stage, when the compound can finally be tested in humans. 9-DS was originally developed by Barbara Gerratana, a professor with the University of Maryland, that gave up the project when she took a job with the National Institute of Health.

Yonemoto hopes this crowdfunded project can become something bigger and attract larger investors. To find out more about the scientific background on the process to make 9DS, you can check the open-access paper disclosing the compound’s production.