Skip to content
You are at: Home » Coinbrief » Altcoin » The Potcoin Way

There are a lot of cryptocurrencies out there, (and, owing to the nature of crypto) some of them have devoted themselves to fulfilling specialized niches. As I have stated previously, it is my sincere belief that Bitcoin drew it’s initial value from the Internet’s most successful drug emporium the Silk Road. Drugs have never gone out of style, and the ability to purchase them in near-total anonymity was a huge win for one of the world’s largest industries. Therefore it wasn’t exactly a surprise when a bunch of developer teams decided to jump on board the bandwagon and devote themselves to the world’s best-loved weed.

Potcoin, the self-professed Official Currency of the Cannabis Industry, is easily the most successful, as I have noted before. And the secret to that success is not all that surprising:  they have built a strong community from the ground up. Compared to Dogecoin (one of the cryptos that never fails to surprise me with its resilience) the Potcoin community is small, the Potcoin subreddit only boasts a mere 1769 subscribers with about one new post a day. Still, it is far larger than any of the competing Green cryptos and I see no signs of this abating.

In the nine months that Potcoin has been around they have developed an active  YouTube presence, thanks to the efforts of Mad Potcoin, a name that I personally would not have chosen due to trademark issues (Oh, who am I kidding?  I don’t really care about copyright issues), who continues to post weekly updates on Potcoin itself, but also other cannabis news that the community might find interesting. 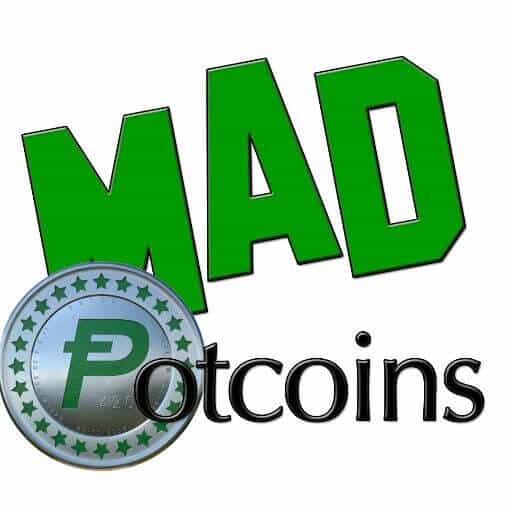 A major innovation came in the form of the Official Potcoin Ambassador program. Managed by Alec Rochford, the Chief Marketing Officer, those who have actual holdings in the crypto (such as myself) can apply to represent the brand (which I did ). The responsibility of that position was that you would then go out and get merchants to accept the cryptocurrency, spreading acceptance and increasing circulation.

From what I have seen this has been a rather successful approach since the number of merchants in the Potcoin community now ranks at  around 40. Included in those ranks are heavyweights like Amsterdam-based Azarius, mining hardware company Gridseed Wholesale, and  Colorado-based River Rock Wellness Center. The Ambassadors don’t get a set salary, it’s a modest commission that serves as a thank you for their efforts to establish and grow a value for something they already believe in. Potcoin has also been added by exchange service Coingateway, which could prove to be a significant step forward if Coingateway should become a market leader.

Potcoin is Tackling Crowdsourcing with Potfunder

Now, more than a few people read that previous paragraph and said “Hey, that’s just a bunch of businesses, man. Where’s the community aspect you mentioned? which is a fair question, I admit. For that, I will direct your attention to Potfunder, the crowdsourcing initiative dreamed up by long-time potcoin enthusiast (and early adopter) Ironhammer5. Their most successful campaign so far was the 200,000 potcoins raised for research into the nature and cure for birth defect Fragile X syndrome which causes mental retardation.

For the sporting enthusiasts there is Potbetz a s gambling site for fans of soccer, mixed martial arts, and cannabis. I imagine that they will begin to add other sports to the mix, but this is an interesting beginning. You generally don’t think about people smoking marijuana and getting into fights (because it’s nearly impossible to do) but there is a surprising number of people who enjoy smoking a bowl and watching other people get into fights. For money, of course, which makes it a job and not personal.

There is also a growing list of new developers on the team who have begun bi-monthly hangouts on Google+ (and you thought no one was using that service.) Led by Nick Iverson, the team continues to grow as they add new programmers interested in the growth of Potcoin.

In Martin Scorcese’s “Gangs of New York” Daniel Day Lewis mentions how anyone who controls the Five Boroughs of the city can make anything happen, a sentiment repeated by George R.R. Martin in “A Song of Ice and Fire” because five fingers are good, but one fist is way stronger. The truth of the idea is expressed by Target Corporation who likes to use the slogan “The strength of many, the power of one.” Since I used to work for Target I can honestly say that you don’t rise very high in the leadership if you don’t embrace (or give the impression of embracing) that philosophy. An army of squirrels is still an army, and a million potheads using one crypto to buy paraphernalia, flower, or anything else is still a viable economy. The market value of Potcoin may have fallen in recent weeks, but so has the price of Bitcoin, and I think it’s for the same reason:  they are actually being used for commercial activity, although Bitcoin on a much wider scale.

When a crypto ceases to be a store of value, and becomes a currency, the price will fall as merchants sell them on exchanges. That just means that a new wave of adopters can come in and take those cryptos back out of circulation, thus driving the profitability cycle. I suppose only time will reveal if I’m right.