Skip to content
You are at: Home » News » Altcoins » Meet Blockr.io, the “human” altcoin block explorer

Blockr.io is the name of a new website totally dedicated to parsing and showing Bitcoin transaction blocks in a more “human and intuitive” way.

The webpage, which was recently launched after six months stewing within a private beta stage, has API access and presents all the important statistics, bookmarks and graphs related to almost any digital currency running on ‘bitcoind’ fork.

According to the team that developed Blockr.io, the project’s purpose “is to bring digital coins closer to the public”.

“Digital coins are sometimes regarded as too magical and we would like to change that. We would like to show people that this magic is just normal transactions and people’s addresses – this goes on in ‘normal’ banks. Anybody can open blockr.io’s site and browse through all the transactions ever made”, the developers told Bitcoin Examiner.

The users can use bookmarks, which are all saved locally on the user’s computer, to guarantee a faster access to their addresses. The website also allows to bookmark all interesting transactions and blocks, as well as share them on Twitter or Facebook. 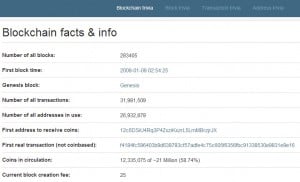 Block.io even lists interesting facts – the accounts with most coins or the highest fees, for example – regarding each coin’s blockchain through trivia sections and graphs. However, “if the users think anything else would be interesting to see, they can send Blockr.io an email and it will try to expand its section”.

“There is a lot to discover in the digital coins’ world. Since everything that happens is visible to all users, you can browse addresses, see who got which coins and who has the most coins or anything else you’d like to know, you can find it all inside the coin’s data”, added the creators.

The team behind the project started developing Blockr.io due to the lack of stable API’s that could support business applications. “We slowly started and created our own personal block inspector site. That was a year ago. After nine months, we knew we had a great product and wanted to share it with the public. That’s when Blockr.io was born”.

Besides, the developers are now researching “five or six other coins” to add to Blockr.io block explorer.

“Some of them will be harder to add, some are already in the test phases. But we’re not stopping with just adding coins as another group is working on user logins and all the goodies that Blockr can give to a logged-in user. We have a zillion ideas out there”, ideas that will only become true if the community gives back a little and helps with some donations.