FREE BITCOIN CRASH COURSE
Enjoyed by over 100,000 students. One email a day, 7 Days in a row. Short and educational, guaranteed!
You are at: Home » News » Lucky Auburn student gets 22 BTC by waving Bitcoin sign on television 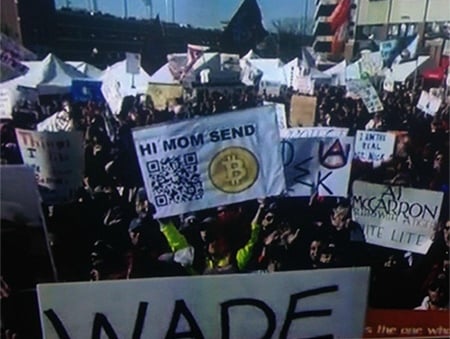 Sometimes a funny image can go viral, but a lot changes when that happens within the Bitcoin community.

Check out the example of this college student from Auburn University, in Alabama, who became the star of the most recent ESPN’s College GameDay, a college  football show that is filmed at a different college campus each week. He simply waved a Bitcoin sign on TV that said “Hi Mom, Send [Bitcoin]” with a Bitcoin logo and a QR code representing his wallet address. In a few hours, he received around $25,000 in cryptocurrency, according to the current exchange rates.

After the guy appeared on television, some Redditors enhanced the QR code from the screen and identified his wallet, Yahoo reports. Soon, the image became viral and got to Reddit’s front page, encouraging people to donate Bitcoins.

The student was already identified as BitcoinPitcher2 on Reddit. In the meantime, he announced he would only be keeping 2 BTC and giving the rest of the donations to Sean’s Outpost, the homeless shelter and outreach in Pensacola that helps people through Bitcoin power.